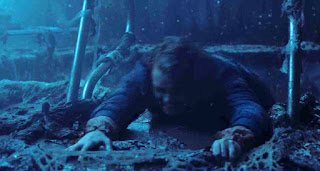 We start right out with Barb, the 80's friend. She's all messed up. She's in a weird room. It's snowing. A thing is in there with her!

I messed with the contrast of an image of the alien. It looks like the creature from last episode, but its head is folded in. 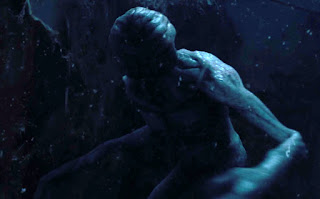 It was weird because it came at her by the pool and then I guess they both disappeared.

Wait.. she's in the pool. But the pool looks weird. Barb is screaming. Nancy (the sister) is getting it on with the boyfriend but it seems like she can sort of hear the friend's cries for help.

Barb gets dragged in to the pool. Sister, your priorities are all out of whack.

A little while later, Nancy seems to regret this little escapade and walks home. Nancy tries to sneak up to her room but her mom catches her. I think the actress playing the mom was Betty's best friend on Mad Men. We seem to be getting a theme here where the mom is telling her kids that they can confide in her, but they refuse to do so.

Joyce tries to tell Jonathan that Will is communicating to her through the electronics. So it looks like Will might actually be on an overlapping plane, like the Shadowfell or the Feywild.

Lucas has a bunch of equipment from 'Nam. He's got a slingshot. Wow, that's right out of Stephen King's It.

Nancy's at school feeling remorseful. Here comes that boyfriend. Look at him. He's overloaded with smarm. He smooths things over with Nancy. Hey! A trapper keeper! 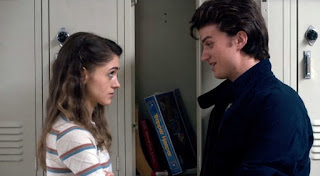 Now that is dedication. I had a trapper keeper every single year. There was a million different designs on those things.

Eleven is home alone. She watches TV and has a flashback. In the lab, she had wires hooked up to her head. They were testing her psychic powers. She crushed a can of coke - we're talking just flagrant product placement, here.

Officer Hopper talks his way into the laboratory complex. He wants to check the security tapes. Hopper realizes they're lying - there was no rain on the footage.

We see an ominous scene inside the lab. Dr. Brenner is going to do something with the portal-thing. 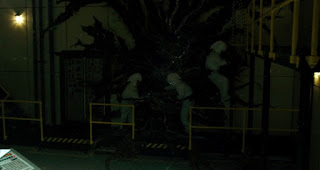 The kids are at recess talking about whether Eleven is like one of the X-Men. The bullies come over and man, they turn it up to 11. They say Will is dead and then they trip Mike. Those guys are going to get messed up, Lucas has a knife from fricking 'Nam.

Jonathan is in the darkroom developing pictures from when he was creeping around. Another student named Nicole comes in and sees the photos Jonathan took of Nancy through the window.

Officer Hopper goes to the library. The librarian actually mentions microfiche but she doesn't pronounce it right. It's "micro-FEESH." Wow, we actually get a microfiche montage.

Mike's mom visits Joyce. She put up all these Christmas lights. Oh no.... the little girl wanders down the hall while the grown-ups talk. She's going to the room! The wall! Phew, the mom comes in just as something started to press through the wall.

Back at school, Nicole has told lame boyfriend guy about the pictures. Oh man, this is awkward. They accost Jonathan, take the pictures and look at them. Ohhh no, here comes Nancy. This is brutal. They break his camera and tear up the pictures.

But Nancy sees the photo of her friend sitting at the pool! Wow. She takes that picture. Great plotting on this show.

Eleven has a flashback to the lab. Looks like they want her to kill a cat with her powers. She refuses. They drag her down the hall and put her in the room again. Wait.. she uses her powers on the guards. She kills a guard! Snaps his neck!

Dr. Brenner isn't mad. He's amazed to find that she can kill with her powers.

Nancy goes on a quest to find Barb, her 80's friend who got sucked into the pool. She finds Barb's car still where it was parked the night before. A thing is in the woods. It scares her off.

Joyce has all these Christmas lights up. Suddenly, they start going off. Will starts communicating via blinking lights. He blinks once for yes, twice for no. Are you alive? Yes. Are you safe? ...no.

Then she gets an awesome idea. She paints letters on the walls with a light above each one. That way he can spell out words. Crazy. This show is very well thought-out. 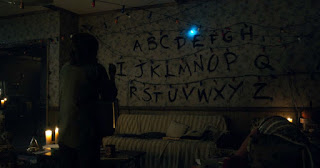 Officer Hopper is starting to put things together. He thinks Will might have been at the wrong place at the wrong time, somehow at the lab.

Joyce starts talking to Will through the lights. He tries to tell her that he's right there. Suddenly, a thing comes through the wall.

The kids follow the cops. A body is found in a lake. It looks like Will but we're not sure. Mike flips out and ditches the party.

They really planned this story out well. Someone put themselves in the shoes of these characters and figured everything out step by step. I also really get a kick out of how they use humor to kind of keep things from getting too dark. Another great episode!
Posted by Sean at 12:49 PM

A cool thing is happening here normally when you post stuff do it's from a position of knowing. Even as a player you experiences it before we did and you're telling us about it.Having seen this whole series and seeing you reacting as you watch is a different thing. It's almost like I'm your dm, watching you guess at stuff and get some stuff close and some stuff far away.

Benji: Awesome, thanks! I like to put in guesses, I don't know why. It's fun to try and guess. Thanks! This show is very good.