This episode is one long combat and there really isn't too much to say about it...

Last Time: The group busted into the ice fortress and stole some loot. There is a battle going on downstairs. 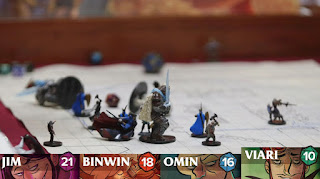 The group goes down to where the fighting is. There's a cold mist, and in it Dran Enterprises is fighting orcs and frost giants. There's a huge set of double doors that have been smashed open.

The heroes jump in and we begin a gigantic battle. At one point there are a bunch of nicknames for flanking thrown out there, my favorite being "Flanksgiving." Another one is not so funny, and the group groans. To me, sometimes a bad joke that everyone hates ends up just as funny as a funny one.

Viari goes down and is dying. Kylo heals him. Binwin uses the wand of wonder. The result: gust of wind. He blows the giants into a wall and maintains it.

Jim tries to cast suggestion on a giant. His brother, Percival, tries to one-up him by casting it successfully. He does. Binwin decides to use the gust of wind to blow Percival up the stairs.Then he uses the wand again and casts a lightning bolt on the giants.

Percival, annoyed with the dwarf, magically suggests that the giant attacks Binwin. It does, and Binwin is nearly dead.

Jim pulls the rod of seven parts out of his butt. It has healing powers. Binwin doesn't want to touch it, but he needs healing. He touches it.

This was one long battle. It was fine, but I wonder if some of the more casual viewers will want to sit through it. The guys are funny the whole way through. It gave a very good example of what a real D&D session is like.
Posted by Sean at 5:30 PM