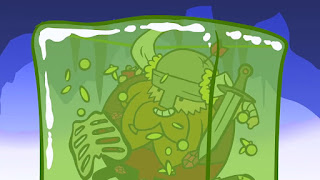 I got the impression that something big happens in this series, and I assumed that meant that somebody dies. I don't know if that is true or not, but we should find out soon enough.

Are these characters "canon"? Is there a "canon"? Do the things they do in the Realms count? For example, if these characters killed Lord Neverember, would he be referred to as dead in future books and supplements? They should be, IMO.

They should make minis for these characters. It feels wrong to see the players using generic minis. Jim Darkmagic is represented by a Strahd mini.

Last Time: The group had a massive battle with frost giants. They are allied with the rival organization known as Dran Enterprises, but there is a lot of tension between Jim Darkmagic and his brother, Percival. 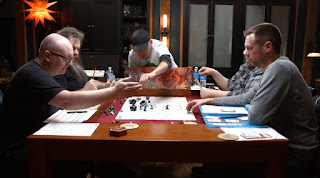 Binwin is healed by the rod for 70 points.

The bad guys are defeated. And here comes another one! Chris plops the gargantuan white dragon mini on the table. Some of the group is worried, as they have already used a lot of spells and resources. Binwin isn't worried. He says the group has killed plenty of dragons before.

Jim tries to cast a spell off of a scroll and fails. Flabbergast the NPC wizard says something and Jim threatens his cat.

Binwin uses the wand of wonder! He targets the dragon. Grass grows in a 60 foot radius around the dragon.

The group rolls badly. The dragon uses his frightful presence. Viari and Binwin are frightened. Binwin uses the wand again. Weeds grow out from the dragon's scales.

Omin tries to cast banish, which would send the dragon to a demiplane for one minute. The dragon uses legendary resistance to succeed on the saving throw. The group likes the wording of the ability. They think "choose to succeed" is something Trump would say. 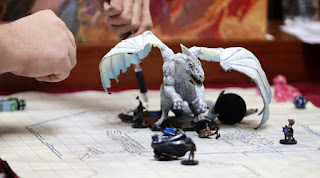 Binwin is down to one hit point from a wing buffet. He second winds to heal a bit, and then he uses the wand again. He summons a rat. Man, he is not rolling well. Nobody is!

The dragon bites and claws Binwin. Binwin is down and dying. Jim is down to one 1st level spell.

NPC Kylo Ren comes over to lay on hands on Binwin. Double cross! Kylo snatches the piece of the rod. No healing. The group is outraged.

The dragon breathes on Binwin, Viari and Kylo. Both fail! They each take 54 cold damage. Binwin is down, Viari has five hit points. Kylo takes damage but has some kind of resistance going.

Jim uses a bead of fireball and does a nice pile of damage to the dragon.

The group realizes that Kylo is Aeofel! Aeofel is Wil Wheaton's old character (read all about it here). Jim summons his unicorn and charges the dragon. It breathes on him. Jim is down. So is Percival. Wow, the group is defeated!

The unicorn teleports away and takes Jim, Flabbergast and his cat along too.

Viari rolls a 20 on his death save! He's up. He has one hit point. Kylo Ren grabs the other piece of the rod and teleports away.

Jim wakes up in a glade. The unicorn heals him for 11.

The dragon is in another room eating someone. Viari brings Omin up with a potion.

The heroes escape and get back to the ship. That's where we stop. This will pick up at the PAX event on September 4th!

Epic episode! Even if you haven't watched the rest of the series, you could watch this episode and enjoy it. This was really crazy.

You can continue on and check out my review of the big PAX West 2016 show here. I thought it was great.
Posted by Sean at 11:50 PM

No mention of Kyle or Aeofel. Only Flabbergast. I would've loved for Kyle to have stowed aboard the battle blimp. He'll be back, just wish I would've been in the theatre for the big reveal.

Anonymous: I expected him to be there, honestly. But to me, the show was so good that it didn't matter.