Adventures in Eberron - Assembling the Deck of Many Things 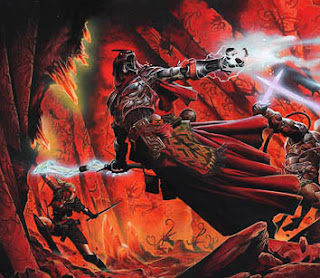 Tonight, I got to be a player again in the monthly Eberron game my friend runs. My character is an 8th level sorcerer who is really hairy.

This campaign has been running for a year or two and the story involves us searching the city of Sharn to find each card of the Deck of Many Things. Tonight, we completed the collection! Next time, we find out what happens.

Getting each card requires going on a little adventure/scenario. We still don't know how or why the cards are appearing in the city.

I rarely run spellcasters and it has been really fun trying out new spells. I have dimension door and greater invisibility now and they are both awesome.

The Bag of Devouring 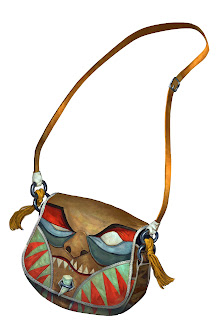 A while back in this campaign the wizard had to travel through a bag of devouring. The bag returned tonight. Basically, it was forcing a halfling to bring it people to devour.

This was in a dorm at Morgrave University in Sharn. The bag can create suction and drag you close. Our NPC hireling ended up in peril. The halfling cast darkness in the room and the bag closed in on the hireling. The wizard cast gust of wind to keep the bag back. I ran in, grabbed the hireling, and using the momentum of the gust of wind we jumped out the window and went flying.

The halfling tried to make a run for it, but our wizard actually chased him down and tackled him, which was awesome because she's a mousy librarian type of character. She really beat him down and knocked him out.

The darkness went away and our party fighter started hacking into the bag. I hustled back inside the building, ran up to the bag and threw the last bead from my necklace of fireballs in its mouth. It survived!

We knew that the bag could be subdued by turning it inside out. So we kept trying to do it and had no success. Then the freaking thing swallowed me and I was down to 8 hit points. Thankfully, our wizard dropped it with a shocking grasp spell.

Linked to that story was another one about these weird lights that someone had shipped in a crate from the Mournlands). It turns out that someone had brought a living spell of hypnotic pattern into the dorm. This thing almost wiped us out. Whenever we looked at it, we had to make a saving throw or else we stood there incapacitated. We were rolling really low on our saves. Two times, our entire party was incapacitated.

The only thing that saved us was the fact that the living spell was killing other people. It killed people in a weird way. Lash marks would appear on their faces. I assume this was some kind of Eberron-specific thing.

I started to hit and run, casting magic missile using higher spell slots and I rolled extremely well. I was able to destroy this thing.

To celebrate, I jumped off of a balcony and cast feather fall as the college students cheered for us. 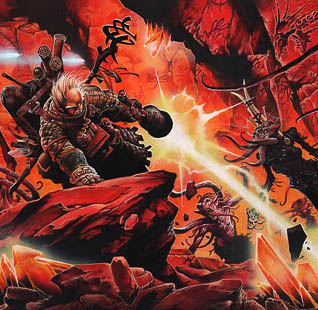 The last card! Finally! This card was in a theater. There was a helmed horror involved in a play there.

What this boiled down to was that we had to break in to the theater. In almost every session we have to break in somewhere and it always a fiasco. One locked door completely shuts us down.

So we get there and, yup, locked door. The party fighter decides to climb in through a window and then unlock the door. It didn't go well. The wizard and I stood out there for awhile and nothing happened.

What our characters didn't know is that the fighter had to walk down a hallway where a gnome tailor was sewing a costume. This gnome proceeded to repeatedly stab our fighter with a sewing needle, then he ran and screamed for help.

What followed was a sprawling battle where our fighter fought about 4 people. They spilled out of a window on the far side of the building and the fighter ended up killing them.

Meanwhile, the wizard decided just to knock on the door. A guy answered the door and our wizard pretended to be a big fan of one actor in the play. She schmoozed this guy pretty good. He was a warforged. He knew about our fighter causing problems, so he launched this metal bird thing that would send a message to someone in the city that the theater was in danger. I tried to cast magic missile to destroy the bird without him noticing, but he 100% noticed.

Our wizard was able to get a tour but I got kicked out.

So from there we eventually regrouped inside. I was invisible and creeping around the place. We needed to get rid of the warforged, so I opened and closed a door to the outside. When he came to check it out, he opened the door to look around outside and I gave him a shove. I shut the door and locked him out of the building.

Then we hustled over and found the helmed horror. The last card we needed was in its chest. A fight broke out. Worse, two people with dragonmarks showed up. Our wizard kept using shocking grasp on the horror, which was very effective. I dimension doored up to a catwalk so I could safely launch range attacks and not have to worry about getting stabbed.

One of the people with dragonmarks dominated our fighter! He turned and attacked our wizard! This was bad.. he does a lot of damage. I cast magic missile and sent one missile at him and the rest at the caster. I figured he'd get a save from taking damage, and the caster would have to make a concentration check from her damage. I hoped one way or the other, this would break the domination spell. It did! She failed her concentration check.

Then she cast a spell I have never been hit with before: polymorph! I rolled a one on my save! I was now a frog. What a devastating spell. I had one hit point.

I had to sneak around and hide while my allies beat up the bad guys. Thankfully my allies chased them off and I turned back into my normal self. We grabbed the last card.

Next One Should be Big

So next time, we're going to find out the whole story. We know we have to put these cards in the hands of certain statues, but we don't know why or what will happen. We have also been told that we need to "draw three to summon the one." So apparently we have to draw three cards from the deck - one for each character.

In the beginning of this campaign, I was very gung ho about drawing cards from the deck. But a few sessions back I actually died and was raised, and now I really don't want to risk dying again.

It was a really good session, as usual. Being a player is hard for me because it is difficult for me to take off the "DM hat." But this week I was able to really be a player and to not think in a metagame way. It's kind of relaxing to be a player. We can just react to what is happening.

I am really looking forward to next session and I have absolutely no idea what is going to happen.
Posted by Sean at 11:23 PM