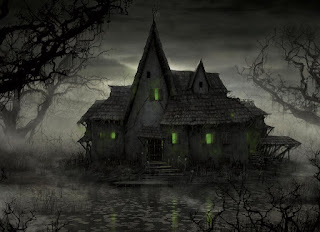 I am really wondering what the Dice, Camera, Action live event is going to be like. It's in two months. Will the group be in the castle by then? Strahd should definitely make an appearance of some sort, methinks.

Last Time: Evelyn turned into a werewolf again and thought she ate a baby. The group met a weird guy who was accompanied by screams of the slain. Madame Eva told him that Diath could help him remove the curse... 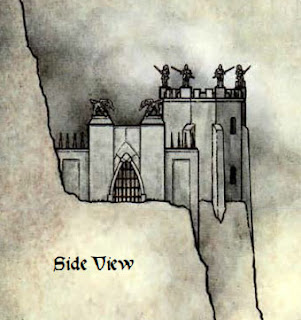 The group heads to Tsolenka Pass, where it is very cold and very precarious. Anna is distressed that Evelyn hasn't had a rest in forever thanks to her lycanthropy.

Tsolenka Pass is really hard to describe. There's a bridge and some gate towers. Check out the map: 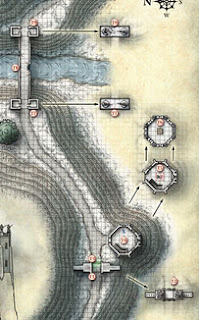 The group is approaching from the bottom of the map. They have to pass through that gate down there, then go up to the bridge.

The portcullis goes up. The creepy NPC walks in. There's a curtain of green flame. He walks through it. The group is a little weirded out.

The group is worried about walking through the flame. They really don't want to take damage. Evelyn is very concerned about Valentina the horse freezing to death, so they stick her near the flame.

There are vrock statues out here. Evelyn checks them out and she's pretty sure they can become real. She hits a statue with Lightfall, her magic axe. Both statues become real and we are rolling initiative.


Evelyn switches to Treebane, thinking maybe it will do more damage. I think she did less damage just because it was stone, not because of anything to do with Lightfall.

Evelyn is up in the air thanks to her flying boots. A vrock hits her with a stunning screech. She falls. Diath catches her and it's pretty funny.

A vrock grabs Diath and flies him over the crevasse. Oh geez, it's going to drop him. Diath escapes the grapple and tries to grapple it. The vrock rolls a onem but after modifiers it still wins. So.. Diath falls! He is going to hit the angled side of the crevasse. He takes 18 points of damage.. not too bad.

There's a ton of scooby doo action, as the group scatters and tries to run, then goes back, then runs. Strix is in gaseous form and she tries to pretend to be a demon lord. The vrocks sort of buy it, and they explain that she should have announced herself. They turn back to stone.

There was a point there where the group was really locked in on fleeing. Chris dropped a number of hints that they should just jump through the green flame but they weren't biting. They came really close to just taking off and going who-knows-where.

Evelyn and Paultin go through the sheet of flame and take 33 points of damage each. Man.. Paultin is down to 6 points.

Strix casts gaseous form on Diath so he can go through the green fire without taking damage. Then Strix goes through the fire. She takes half damage because she's a tiefling.

The group is totally wrecked and distraught. Strix starts yelling at her Strahd doll. Paultin can't bring himself to play an encouraging song.

The group decides to take a short rest. Their friend Kasimir is off trancing (he's an elf).

They hear the portcullis shut. The group is really wrecked.

The adventurers decide to rest here for the night. They're going to have to survive another long rest with werewolf Evelyn. They tie her to a ladder and deprive her of her weapons. As the night goes on, Evelyn doesn't transform.

In the middle of the night, Strix is keeping watch. She hears a loud noise - the flapping wings of something gigantic is outside. That's where we stop.

I couldn't think of what it was until I looked in the Curse of Strahd book. If you want to know, check out the picture on page 160. This could go a few different ways...

I planned to watch half of this show tonight and half tomorrow, but I got sucked in and before I knew it, the show was over. There wasn't a lot for me to write for a good portion of the show - it was chaos. I think what made it fun is that the players are so into it and they are all really funny. Jared is very quick-witted.

Checks: Chris asks for a lot of insight and perception checks. There's no battle map, so he seems to let the dice answer most of the group's questions about positioning. For example, a few weeks back Ireena fell of Strahd's horse into the snow behind a building. The group had to make perception checks to see if they could find her body.

It seems like a good idea. As a DM you're tempted to just say 'yeah the body is right there,' because it is difficult to figure out how long it would take them to find a body that might be partially buried in snow. My initial reaction is that it's too much die rolling, but it didn't hurt the game at all.

It seems like the DC is usually 10 for these checks, too. Maybe I'll give this a try in my next Planescape game and see how it goes.
Posted by Sean at 12:07 AM