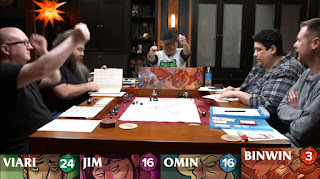 This episode is an hour long, just like last week.

So the deal is that Stratovan the cloud giant has hired Dran Enterprises to get pieces of the rod. The heroes of Force Grey are busy on their show trying to get a piece of the rod to keep it out of Stratovan's hands. How this all will work out should be revealed relatively soon.

Last Time: The heroes are actually teaming up with Dran Enterprises to get a piece of the rod from a castle half-buried in ice. They are battling frost giants.

The group closes in on the fortress. We have a big poster-sized drawing of the exterior.

Jim launches off another fireball at the frost giant. Then, his brother Percival casts a fireball. They are competing with each other. Jim decides to subtly cast counterspell to block the spell. Then he turns around and yells, "Pussy!" Percival is not amused.

During the battle, Kylo Ren drops his magic rapier. Viari scoops it up and after the battle hands it back to him. Kylo has some kind of pendant but Viari can't make it out. Binwin kills the giant with two axe attacks.

During some conversation with the NPCs we learn that the piece of the rod we're looking for is named Lex. It can cast hold person.

There's an open portcullis that leads into the interior.

Viari wants to loot the giant. They find a giant drinking horn, cheese and chicken. They also find a nice pile of silver and copper. 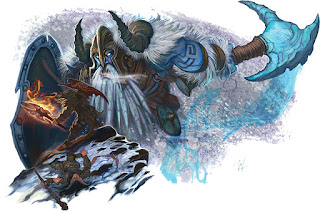 Inside, there are some giant-sized ladders and evidence that smaller sized humanoids have been here too.

Percival asks Jim how many pages he has in his spellbook. Jim says, "You only have one spellbook?"

There's a big sound from downstairs. It sounds like the giants are trying to ram their way through something.

Kylo is quietly healing himself. Omin rolls a 20 on a check and realizes that Kylo worships Melora - a goddess from the Nentir Vale (the 4e setting!). They realize that Kylo is Auspicia in disguise.

The group really wants to look around this place despite the fact that there is stuff going on downstairs. They check out a room.. it's a bedroom. There are two giant-sized chests.

Inside a chest is a pile of gold. We actually roll on the magic item chart in the DMG. There's a few scrolls and a giant-sized potion. It has red liquid and it has flavor crystals.

The spells:
The group is really fired up about the treasure. They check out the other chest. Dran Enterprises are down below fighting frost giants, orcs and a giant wolf.

In the other chest:
Timestamps

This was a really good, laid back episode. This one really gave me the "D&D feeling." The rolling for treasure really reminded me of a session I played as a kid where my character sort of "paused" the story of the campaign because I wanted to hunt scavvers (space sharks in Spelljammer). The DM was nice enough to accommodate me and the whole session was pretty much generated by wandering monster chart rolls and random treasure rolls (some of the scavvers ate people who had magic items). It was one of my favorite sessions of D&D that I've ever played in.

It seems like switching to hour-long episodes is working out better. The shows just feel more complete and there aren't any moments when I'm checking the clock.
Posted by Sean at 1:47 PM

You know who else worshiped Melora? Aofel. In this episode or the one after, was there a point in combat where "Kylo" teleported across a room, like an Eladrin's Misty Step ability? I thought I heard that (I only listen to these streams, I don't get to see the visuals). The former Avenger class is now a Paladin in 5e. That would explain Kylo's sword, his healing ability, his teleportation. Now I don't expect Wil to come back to the cast, but maybe this is Chris' way of wrapping up Aofel's story.

Greg Kramer: Awesome! I am not really familiar with Aeofel, I'll have to read up on him. Thank you!