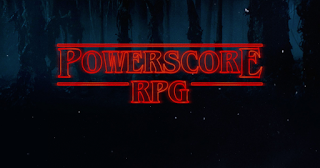 The other day, Holly did a video where she talked about D&D and showed off her D&D room. She owns this piece of original art: 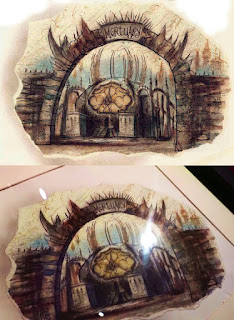 The top image is from a .pdf for comparison purposes. I wonder how much that cost.

Holly says she's working on a campaign. My heart was warmed when I saw that she was using 4e books, the 5e MM and the 2e Planewalkers Handbook (signed by DiTerlizzi!).

I've been messing around with this Stranger Things logo maker. So you might have to put up with me making these logos for a few days.

We have a special guest this week, a guy from the Godsfall Podcast. From what I understand, that show has a campaign that is a combination of D&D and super heroes.

Let's do this thing:

Last Time: The group is trapped in the Amber Temple and they are really close to dying. Three flameskulls almost burned them to death. Paultin was destroyed and turned out to be made of snow! 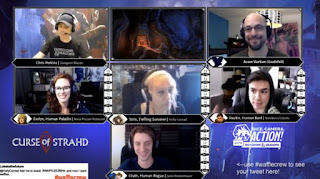 Aram has a really weird painting behind him.

Paultin is up to his nipples in cold water in a cell. Ahh... is he in Castle Ravenloft?! He's been here for over a day. Someone whacked him with a broom and knocked him out.

Someone else is in a cell across from him.There's someone else in there with him. It's this guy, from Curse of Strahd page 81: 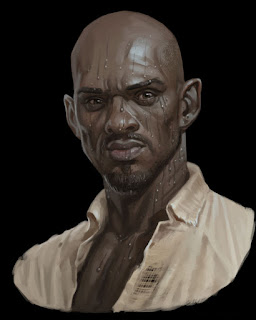 The jailer is a mongrelfolk guy. Paultin casts suggestion on him. Chris asks him what the DC is. Nate doesn't know. Chris has to look it up for him. Geez, dude.

The suggestion spell works and he convinces the mongrelfolk to let him out.

Meanwhile, in the Temple, Strix figures out that Paultin was a simulacrum. Strix checks out the avalanche that is blocking the exit to the Amber Temple. It's not snow.. it's rocks! Yikes.

Diath wants to get up that statue that almost killed the group last time stealthily. After much amusing debate, they decide to let Diath try to stealth. The group teases him about being 18 years old now thanks to that potion of youth.

Emil and Paultin are wading through water. Zombies rise up and attack!

Paultin casts thunderwave, blasting them away and hitting Emil, too. The sound of the spell is deafening. They eventually destroy the zombies.

Emil and Paultin come to a room with a bunch of gems. Emil notices that Paultin's shadow is moving weirdly, but he keeps it to himself. There's a rhyme here that explains where each gem can magically take you to. Violet leads to the mountain's spire. Emil throws the violet one into the flames.

Diath finds signs that there is a giant creature in this place. He encounters an animated amber statue. Diath runs. Strix turns Evelyn into a cloud. Diath hides. No, now he's running. Diath and the statue are heading right for the room where Strix is.

Strix casts alter self. She makes herself look like Strahd! She makes a deception check... rolls a 19!

Back in Castle Ravenloft... Emil goes into the magic fire and he disappears. Paultin is alone. A door opens. It's... Kasimir! Ass Smear!

Kasimir says: "The Master wants to see you. Come with me if you want to live."

Chris points out that the portal is going to fade soon. Paultin is trying to decide what to do. He's taking wayyy too long. He decides to go see Strahd.

The players are shocked that he did that. He could have just escaped through the flames. I think he made a fun choice. Strahd wants to recruit him, not kill him.

Good show! Aram was good, but the poor guy didn't get to do much. He will likely be back at some point to run Emil again.

Doing an entire session where the group is split is kind of cool, but the Paultin stuff dragged a bit. I hope the group reunites soon. It should be fun to see what Strahd does with Paultin next week.

I made this thing and didn't get to use it this episode: 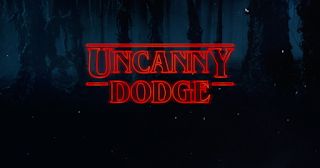