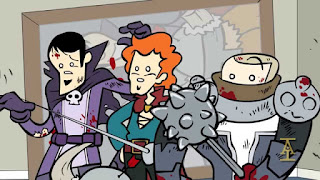 I have no idea what is going to happen now on this show. Is Dran Enterprises going to show up? Will a giant from Storm King's Thunder somehow be involved? 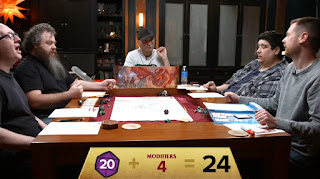 Last Time: The group was able to escape the dwarven fortress via a secret door. They now have a piece of the rod of seven parts.

The group thinks they should have killed Carrington. Jim has a piece of the rod up his butt and he is riding a unicorn named Andahar. The group goes to Waterdeep and heads to the Acquisitions Incorporated headquarters.

At the HQ, there are dead employees everywhere. It's a slaughter. Massive layoffs, says Scott.

They should have Mike Schley make a map of the Acquisitions Inc. headquarters.

A wizard named Flabbergast is here. The group met him in a previous adventure. He says, "There's been an incident." His cat's name is Mr. Snivelly. Flabbergast apparently had nothing to do with this. He wants to recruit the heroes for a mission.

Jim goes upstairs and finds the corpse of a stranger - a guy in black leather armor. Jim could tell that he was killed by Portentia and her two daggers. Portentia might have been abducted by these mysterious assailants.

Flabbergast wants the group to team up with a Dran Enterprises extraction team to recover another piece of the rod. The group is up for it.

The group gets on a ship and settles in for a long voyage. They have to share a cabin. Flabbergast is using a crystal ball to spy on the Dran Enterprises team. There's two dozen of them. One of them looks like Kylo Ren, wearing red.

The ship arrives. The group heads to a crashed castle from the ancient wars between the giants and dragons. It was a cloud giant castle. It is now the home of a dragon. Most of the castle is buried in ice. This is where the piece of the rod is.

The group meets up with the Dran expedition. Percival is there, who I think is Jim's brother.

There are huge tracks in the snow. It looks like the tracks were made by a band of frost giants who got here a bit earlier. They might be going to get the rod, or to claim the castle.

As the expedition heads up the mountain, it starts snowing. Suddenly, up by the castles, a frost giant chucks a huge chunk of ice at the group. Omin casts a fire spell that splits the ice chunk. Some of the group takes damage and one NPC is killed.

Jim uses featherfall to make the heroes light in the hopes that it will aid in their climbing speed. Jim hits the giant with a fireball doing piles of damage. Percival one-ups him by casting a fireball spell a one level higher.

That's where we stop, mid-combat!

Good show, easy to watch. This episode was an hour long. When the group is comfortable each other, it's fun to watch even when nothing is getting done.

Who Has What Pieces of the Rod? So it looks like this is how things are going to work out:
So I guess we're going to rumble to see who can get all of them. Remember that whoever assembles it may end up being possessed by Miska the wolf-spider. Maybe the Queen of Chaos will even get involved. She's an NPC that I think could use a serious overhaul/refresh.
Posted by Sean at 1:59 PM