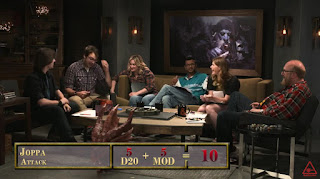 Let's see what it is like with Brian Posehn in the group!

Last Time: Chris Hardwick's character died! Brian Posehn joined the group. They're exploring a mage's sanctum looking for a piece of the rod of seven parts. 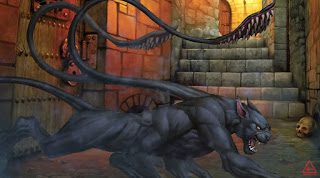 Hitch wants Whil Wee-Tawn's little dragon. He grabs it. It's not happy. They struggle a little bit.

Dagny finds a potion of hill giant strength. Ut oh.. displacer beasts! There's two of them. We get a sweet graphic. I love it when they take the 5e art and semi-animate it.

Matt has a really great description of how displacement works. Brawlwin is hit twice. So is Calliope. She uses cutting words to avoid an attack.

Joppa tries to use a light spell to shine through the displacement. It doesn't work. Joppa wants to use another action. Matt decides to let him do it if Joppa spends a ki point. He does. Joppa tries to  immobilise them with his fishing rod but he rolls low. 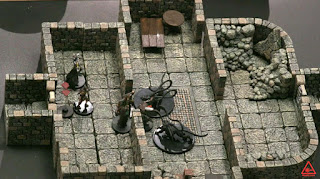 Calliope uses suggestion to get a displacer beast to put its head up its ass. Matt has a great description of this process. It has disadvantage.

Hitch tries a flippy move but he rolls a one. Matt decides that the displacer beast gets a shot on him and it wounds him.

Calliope ends up convincing it to kill itself.

Dagny sets off a trap and takes some lightning damage. Then the group explores further.

(18:42) Calliope makes a displacer beast shove its head up its ass.

A decent episode, nothing really wrong with it. This is one you could skip.
Posted by Sean at 4:47 PM