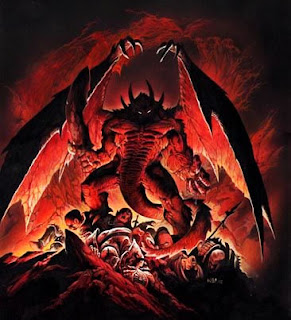 We had another really good session of Planescape tonight. Once again, I did my best not to over-prepare for the game. I actually waited until 2 hours before the session started to work on it, which is normally something I would never do.

I wanted to have the group deal with the aftermath of a battle between Iggwilv the Witch Queen and a home-brewed demon lord of mine named Bazuuma. I decided that now was the time to rip off the Chris Perkins Acquisitions Inc storyline! I was going to have my group bust in to a vault and try to steal stuff just like on the show, but re-flavored and shrunk down a bit.

I wanted the vault to be owned by a demon lord, but I couldn't figure out who. I decided to go through one of my favorite books, Books of the Damned vol. 2: Lords of Chaos for Pathfinder. I struck gold when I saw Socothbenoth. Few demon lords are more suited for my group's ridiculous sense of humor:
I was struggling to cook up NPC names so I figured I'd double up on my Perkinsness by using the Chris Perkins name list.

Making Friends With Monsters: I feel like I should mention that a lot of times in my games, I make the bad guys be kind of nice or goofy. I really like having the group be friends with pit fiends and demon lords. I've always run my games like that, but it is even more prevalent now that I am a bit older and more mellow. I just find it more interesting, even if it really isn't "by the book."

Last Time: Bidam sold his soul to a contract devil. Theran got trapped in his own spellbook. The heroes stole the Iron Tome, the item the bad guys were using to control the Iron Shadow and "unmake" entire planes. Bidam and the warder devil Feurina ended up sharing memories. They have the power to summon each other. 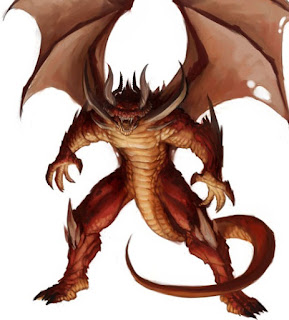 Safe in the Abyss: The group appeared in Burningwater, the 9th layer of the Abyss that Bazuuma and Bechard, demon lord of tempests, live in. Bechard is an obyrith (one of 12 ancient demons) who the heroes saved from an eternity of torture a while back.

Drokkarn, the pit fiend, was with the group. He had been a nothing more than a sentient cloak named Fiend's Embrace, but Bidam gave him a wish and Drokkarn wished himself back to life. Drokkarn hated being in the Abyss, and Bazuuma's demons (jovocs and foul-mouthed red unicorns) didn't like him either.

Saving Theran: Theran was trapped in his own spellbook along with the entity known as the Iron Shadow. Selinza eventually opened the book and was almost unmade by the power of the Iron Shadow, but she made a successful saving throw. Selinza cast dispel magic on Theran's page and Theran was able to escape and rejoin the group.

Iggwilv vs. Demon Lords: The place was a little trashed. It turned out that Iggwilv had shown up with two of her arcanaloth apprentices and tried to force Bazuuma to serve her. I had read somewhere that Iggwilv secretly controls up to 12 demon lords, and I decided to run with that concept.

Iggwilv didn't know that Bechard was here, too. Bechard, a demon whale, popped up out of the water and slaughtered the arcanaloths with a blood mist plague emitted from his blowhole. Bazuuma removed her veil and fired off 20 eye rays at the Witch Queen. Iggwilv was loaded up on status effects. She teleported back to her mansion in the Gray Waste, but she was enfeebled and half-turned to stone.

Bazuuma is a demon lord of positive energy. She wants to be friends with everyone. She asked the group to go try and smooth things over with Iggwilv. Drokkarn is in love with Iggwilv, so he also wanted to go.

Son of Bidam: I should note that Bidam and Bazuuma's son, the abyssal dragon wyrmling named Pyranicus, was very excited to see his dad. Bidam actually forgot that this kid existed.

Iggwilv is Hurt: Using their cubic gate, the group went to Iggwilv's mansion. She was all messed up. Her nice arcanaloth apprentice, Landerbold the Dandy, cooked up a scheme with the heroes. Landerbold spent a lot of time in The Cathedral Thelemic spying on Socothbenoth for Iggwilv. He knew that there was an item in the vault there that could help Iggwilv. It was a scarab of protection (DMG page 199). It helps you make saves and stuff.

So, the plan was have Landerbold cast plane shift to the Cathedral. Then the group could try to steal the scarab. Landerbold gave Drokkarn a hat of disguise. You can't really have a pit fiend walking around in a demon lord's home without some kind of disguise. Selinza stayed with Iggwilv, her buddy. 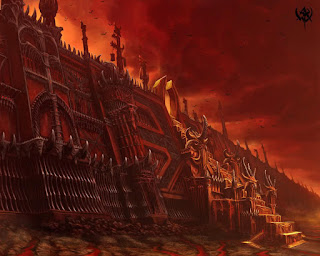 The Cathedral Thelemic: The group appeared in the Cathedral and made their way past a horde of dretches. They bumped into some bad guys. On Acquisitions Inc, there's this group of Zhentarim also in the palace stealing stuff. For my campaign, the bad guys in this role Bloodquake and his scumbag tiefling buddies. The group didn't remember who Bloodquake is and I didn't clue them in. Bloodquake is the ridiculous villain that the ridiculous magical Unicorn man is looking for in Sigil.

Bloodquake gawked at the heroes and was a real jerk to them.

The group went ahead and checked out some of the rooms of perversion. I'll spare you the details, but suffice it to say one room contained a half-demon/half-owlbear having quite an experience.

They got to the vault and went to bribe the guard, who was a solamith (my favorite demon type). They give him bottled breath and he referred them to Socothbenoth's daughter, Domitia (I made her up for this).
Bidam was in the process of seducing her when a magical alarm went off. Everyone had to report to the throne room.

It turned out that Bloodquake had stolen a belt of giant strength from a yeti-woman. He was trying to pin it on the heroes, but it wasn't going well.

The Pit Fiend Goes Rogue: Drokkarn the pit fiend had been complaining constantly about the chaos in the cathedral. As a devil, he can't stand disorder and he can't stand demons. His skin was crawling.

Drokkarn took off the hat of disguise and revealed himself. He handed the hat to Bidam and whispered to him to go to the vault. Drokkarn would provide a distraction. The pit fiend attacked everyone in the throne room with a massive fireball.

The heroes ran to the vault and Bidam used the hat to impersonate Socothbenoth. The Solamith fell for it and opened the vault. In Acquisitions Inc. there was this whole thing about needing two keys for the vault, but I didn't use that idea because I wanted to get this done in one session.

The group got in the vault, grabbed the scarab and a bag of holding as well. I thought the group was good to go. They could use their cubic gate to get out of there.

But, to my surprise, they didn't. They went back to get Drokkarn! They ran into the throne room where Drokkarn the pit fiend was battling Socothbenoth the demon lord. Drokkarn was hurt really badly. We rolled initiative, and the heroes actually went first and second! They ran over to him and used the cubic gate. They all escaped.

Their New Friend: All of them appeared back at Iggwilv's. I asked the players why they did that. They told me that they really like Drokkarn.

We played out a little thing, as Drokkarn was shocked that they came for him. The group told him he was their friend. I think Drokkarn is going to stick around for a while, as I like doing his voice and the group really likes him, weird as that may seem.

The group gave Iggwilv the scarab and there was much celebrating.

New Trouble: But then... Bidam disappeared. Feurina, the warder devil who is bonded to him, summoned him to the lair of the devils - the chained fortress of Panos Qytel in Hell! The devils want their book back.

That's where we stopped! Next session should be awesome. I am kind of running this week-to-week. I do want to get to the Hellbound adventures soon but I don't want to kill the momentum, as we have a nice episodic thing going on. I think I can use next week to set up the climax of the whole Iron Shadow/Infinite Staircase storyline.
Posted by Sean at 1:31 PM

I totally agree about being friends with monsters. I think it's so much fun to have the party going around talking with powerful evil beings and having to negotiate with them. It is so cool when you have a level 2 party awkwardly trying to talk to a beholder or something. Make the monsters goofy and somewhat reasonable and the players will get attached!

In one of my campaigns my party just allied with a slightly insane, lawful neutral mind flayer alchemist who is trying to find a way to make it so mind flayers don't have to eat brains to survive. He basically made a deal with them that he'll give them stuff, they won't tell them and they send him evil people they defeat so that he has a source of brains to eat. After the session was over one of the players said "That was so cool, I've played in plenty of campaigns where we've fought mind flayers but I've never been friends with one before, this is really interesting." It made me happy, haha.

Encounters that are always resolved via combat become one dimensional and boring. This Planescape campaign of yours has certainly shown a wide range of interactions with characters (monsters and otherwise), most of which would just result in rolling for initiative in many campaigns.

Baticeer: That sounds really cool. In the 2nd edition mind flayer trilogy, there is this tea called laethen that you can drink to turn into a mind flayer. It's dangerous, it might kill you. Maybe you guys could cook up the reverse and turn the mind flayer into something else. Making friend with monsters is awesome!

Jason Raabis: Thanks! I definitely try to keep it from becoming an endless series of combats. I want it to feel more like a story. Jessie makes it easy because he's always doing wacky stuff!