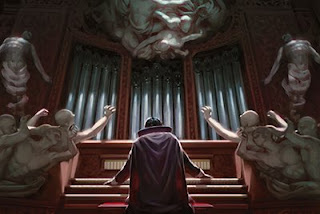 Way back in episode 6, Rictavio helped the group understand Madame Eva's Tarokka reading. Basically, the group learned where the items that they need are:
This means that the group will probably find the Tome of Strahd soon. Paultin is in Castle Ravenloft. In theory, he could get the Sunsword. He needs to get to K67 (page 78).

It is also nice to see that these reviews get plenty of traffic, too. It makes me feel good to know that there is interest in this show. I have learned a lot from watching Chris run this and for the past two or three months it has been consistently excellent.

The dancing minotaur is back. I like it better than the mind flayer. The mind flayer is somehow too unwholesome, creeps me out.

Jokes: There's some really good jokes on this episode which I kind of spoil, so if that matters to you maybe watch the episode first.

Last time: Paultin is in Castle Ravenloft, about to meet with Strahd. The rest of the group is trapped in the Amber Temple, running from a giant amber golem. 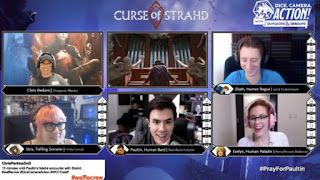 Kasimir brings Paultin up to a chamber where Strahd is, standing near a portrait of Ireena. There appear to be two people sitting in chairs facing away from Paultin.

Strahd tells Paultin a story about how he befriended the vistani in the past. They can come and go from Barovia freely. Strahd says that Paultin is only alive because he is a vistani.

The people in the chairs:
Kasimir is blocking the exit, holding the hilt of his weapon.

Strahd says his friends are confined for all time in the Amber Temple. Strahd is holding a goblet full of blood.

Strahd wants Paultin to join him and be his eyes and ears. The other option is to rejoin his friends in the dark tomb and die with them.

Paultin asks for food first. Paultin notices that someone is lying on the floor, dead. It's Father Donavich, the priest from the second episode.

Paultin is led to the dining hall by Gertruda and Escher. The hall is covered in dust. There's an ancient wedding cake, green with age (K36 page 65). They pass through the room and go to another dining room (page 56, K10, one of my favorite encounters in the book).

Chris keeps subtly trying to get Paultin to interact with Gertruda but Nate isn't taking the bait. Nate in general takes a long time to make any decisions or even respond to dialogue.

Finally Gertruda tries to talk to Paultin. She shows him a pendant that Strahd gave her. Nate still not doing much more than giving four-word responses. A mongrelfolk guy comes in. He gives Paultin soup with an eyeball in it.

The dusk elf bullies the mongrelfolk a bit. He hits on Paultin and shakes hands with him - then holds it. "Your hands are so warm," he says.
In the temple, Evelyn is in gaseous form. Strix is magically disguised as Strahd. She starts doing a Swedish accent and she orders the golem to go smash open the entrance. That is really clever! Her accent is hilarious. Chris says it sounds like the Man From Another Place.

Evelyn spots a skeletal figure who might be controlling the golem (this person is in X27 on page 188). It looks like the creature told the golem to leave the heroes alone.

Diath and Evelyn hide in a closet.

The creature is a lich. Time has worn its memory and body to the bone. He explains to Strix/Strahd that the golems can't bash the door out of the temple because they can't leave the temple proper. Chris does a hilarious and awesome lich voice.

He explains that there are ancient entities here who know great secrets. He repeatedly refers to them as the "Dark Powers," which tickles me every time. The Dark Powers of Ravenloft! They were such a big deal in 2nd edition in my games.

The group wants to restore the lich's memories, so they take him to the library (X30 page 189). Right downstairs are the "entities." The lich says that they can grant powers. I really hope the group goes down there.

Strix is staying in the library. The lich leads the group down to the entities. They go right down to my favorite entities! The group realizes that these are the vestiges of dead gods.

Anna points out that during Madame Eva's tarokka reading, she said an item they need is beyond amber doors. They find amber doors and spot a big pile of treasure in a weird fold in reality. 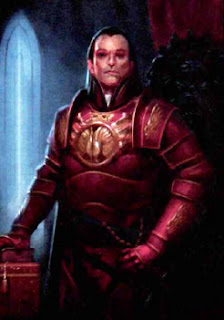 Meanwhile, Escher shows Paultin to his room. While walking through the castle, Paultin sees a portrait of Strahd that is watching him (K47 page 70. "Mind the carpet," says Chris) and brings him to k50, page 71. That's right next to Escher's room! Hilarious.

Escher is still hitting on Paultin, so Paultin shuts the door in the guy's face.

In the guest room, all of the candles go out one by one. Paultin senses that someone else is in here. He uses faerie fire, but it reveals nothing.

Mist comes out from under his bed. It's Strahd! Holy...

Strahd wants an answer. He wants to know if Paultin will join him and be his spy. Nate kind of stammers for a really long time... ugghh. A lot of stammering and silence for over five minutes. I went back and timed it: 5 minutes and 44 seconds. Finally Strahd grabs him by the throat and demands an answer.

Then Paultin... ever so slowly.. finally, signs on with Strahd.

Back in the Amber Temple, Diath pokes an inert amber statue. Evelyn really wants to find a way to cure her lycanthropy. Evelyn tries to use a magic command word to control the statue, but it doesn't work.

Back in the castle, Strahd leaves, annoyed. Escher tells Paultin that he made a smart choice. That's where we stop!

I would have a hard time using all these NPCs at once and keeping them all straight. Watching this will really help you run Curse of Strahd. I really do feel like I could run this adventure without ever having read it if I watched this show instead.

I don't know what the deal with Nate is, but I really hope he rejoins the group ASAP. The game comes to a complete stop when the spotlight is on him. I don't know why it is happening. It makes the show very hard to watch at certain points.
Posted by Sean at 1:54 PM

yeah, I have a "Nate" too in my group. It takes 2 Minutes to take an answer from him. Paultin is so a great character with so many opportunities. The wereraven guy or the esmeralda guy would be hell better.

Konrad Ferlangan: I've had players like that too! It's OK in real life but it makes a show tough to watch.

If we use the player typing as illustrated by DM Matt Colville as reference (there's a good segment on YouTube where he talks about different player types for new DM's), then Nate would be the quintessential "audience member". It's almost as though Nate is hesitant to interfere with the story that's being told -- not so much out of fear but more out of paying too much mind to what's going on.

Re: Nate. I agree w/ what Dan said. Nate seems content to "watch" the story rather than participate. I wonder if his separation from the rest of group was Chris' way of trying to bring him out of his shell. No luck yet, it seems. It is weird in that, from what I understand, he is a musician and performer, so it shouldn't be "shyness". And they've been playing long enough where he has seen the others do stuff and interact and influence the story direction. His character rarely gives more than one or two word answers.

I don't want to be hard on the guy, but you're a player with one of the best DM's in the world! Take advantage of it! _Do Something_!

The group has made it to what I think is the strangest thing in The Curse of Strahd, the Lich. Has alignment been totally eliminated in 5th Ed.? A Lich has always been one of the worst "evil" baddies in the game. Remember the one in Descent Into the Depths of the Earth? If the party heals this Lich there will be a Challenge Rating 21 (Monster Manual pg. 202) baddie on the loose. Strahd's Challenge Rating is only 15 and he is the Boss Monster. This doesn't make sense to me. I feel like the party, once they have found the Lich, would be better off joining Strahd to wipe out the Lich; not the other way around?

What do you think?

Greg Kramer: I have to keep reminding myself that some people don't like to be put on the spot and maybe that's how Nate feels. He was fantastic this week (episode 21) so maybe they've ironed this thing out.

feanor: The 5e lich is pretty weak! In Dead in Thay, my group destroyed a lich and they were level 5 or 6. I think the idea here is that the lich has forgotten so much that he is more of a comedic figure than anything else. I assume if he got his memory back, he'd be a major evil threat. In Princes of the Apocalypse, there is a good lich in the Sacred stone Monastery. They've definitely been doing some weird things with liches in the past few years. Thanks!

You have a great blog, Sean. Keep up the good work! But, the thing that really has me scratching my head (as a player who started D&D in 1976 with the original 3 books) is the almost complete disappearance of alignment. How could a LG Paladin or Cleric justify casting heal type spells on a lich? Assuming the lich is really evil of course. I would think the next time they had a long rest the least that would happen is that they wouldn't feel so rested and that they didn't get some spells back. Do the gods no longer care about this kind of thing?

feanor: Thank you! I think that this capaign is a lot more "loose" than a normal home game. Chris seems to run creatures as people with varying degrees of malice and goodness mixed together. I do agree that Evelyn should have been really bothered by the lich, as it is evil and undead. We could say that maybe Evelyn is becoming corrupted. She did actually like being a werewolf, so she's walking down the path of darkness. I think that in Barovia the gods have little to no connection so I'm not sure if Lathander even knows about this. I don't remember the exact wording in the book, but while clerics and paladins still get their spells, Strahd can pretty much block out divine entities. He can even hear and respond to prayers. It is possible he is intercepting them.