We're back to the dancing mind flayer graphic before the show starts. I wonder why they switched out the minotaur?

Nate can't make it this week, so Paultin is relegated to NPC status. 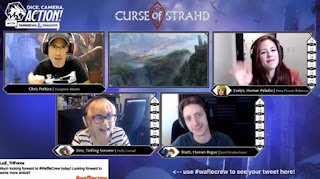 Last Time: The group got beat up by some vrocks. They are traveling with a mysterious guy who they don't trust. The heroes were resting at night and they heard a giant creature flying around outside.

Strix hears the flapping wings and she sees Kasimir drawing his scimitar. Strix yells at him to go take care of it. This wakes up Diath.

It's gone. Nobody is sure what it was. The group is able to get their long rest. Evelyn didn't turn into a werewolf.

The group is able to traverse the rest of Tsolenka pass without too much difficulty. After a bit of Stahd puppetry, Evelyn smells wolves. Not werewolves. Sounds like it is Strahd's wolves on their trail.

And here we are... the Amber Temple. This should be awesome. This place is made for 9th level characters and right now the group is level 6. Not sure what is going to happen here. 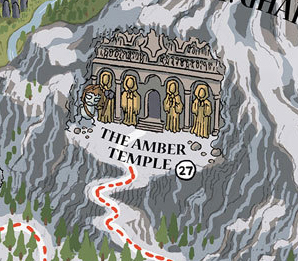 Chris describes the vestiges in the temple as "gods of secrets." Great wizards locked them away.

As the group frets about going inside, Diath calls Kasimir "ass smear." Ass smear ignores Diath and turns around. He senses that creatures are coming. Dozens of creatures.

Here they come. They are wolves. Some of them are horse-sized! Kasimir makes like he's going to hold them off. The group freaks out and goes into the temple.

They creep around a bit. They find a big statue of a robed hooded figure. A "dark god."

Suddenly, a bolt of lighting comes out of the hood of the statue and rockets into Evelyn. Evelyn takes 47 points of damage! Then the bolt leaps to Diath (chain lightning). Diath takes 44 points of damage. He's down!

Then it leaps to Strix! Man, this is one nasty spell. Strix takes 44. She's down, too. Yikes, we might be looking at a TPK.

The group doesn't know if the statue did this or if there is someone up there. Check out area X5a on page 184 in the Curse of Strahd book.

Strix wants to shoot a fireball up there. The group seems to think it won't do anything. She does it anyway and does over 40 damage to something.

Here comes a fireball from the statue! Evelyn covers Diath. She is heroically taking all of the damage to save him. She saves with disadvantage. She fails. She decides to use inspiration, so she gets to reroll. She rolls a... 3.

Anna is being really hilarious this week. They all are. I almost never laugh out loud at anything on TV or the internet, but I think I've laughed four times so far.

Diath and Evelyn are unconscious. Strix is the only hero standing. Well.. NPC Paultin is here. Not sure how much he can do without getting into that weird "what do you mean my character died when I missed a session" territory.

They're in an area away from the statue. They're safe for the moment.

Chris checks Paultin's sheet to see if he has any healing spells or items. He doesn't! Strix pours a potion into him - one of the potions the group took from the hags in Old Bonegrinder. Egad.

Strix force feeds the unconscious heroes snacks. She decides to go find Kasimir in her gaseous form. Outside, the wolves have surrounded him. They're not attacking each other. They seem to be on the same side. It seems like they are waiting for the group to come out. Wow.

Strix returns to her normal form and yells at Kasimir. Whoa.. she tries to intimidate him. She's going to die! He tells her the mountain is her tomb. He says he is going to kill her if she comes a little closer. Strix runs back inside.

She rejoins NPC Paultin. They hear a huge rumbling sound. It sounds like the mountain coming down outside - crashing ice and snow.

Someone brought snow down from the mountain and buried this place. The group is trapped in the Amber Temple.

Strix cries. She drinks some of Paultin's wine. They dump some wine in unconscious Evelyn and Diath. Strix decides there's only one thing to do: Call on Lathander for help! Awesome.

There is no answer. How depressing. She made a great little speech. She even offered to stop calling him "Butthander." The torches slowly go out.

Oh no... Strix is going to explore the temple alone! This is not good. She goes into a room and comes upon three flameskulls. 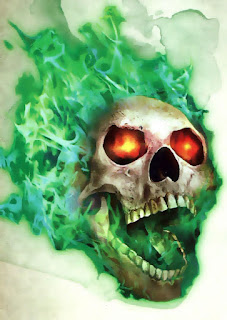 They send rays of green flame at her. She's a tiefling, so she takes half damage from fire. She's got just a couple hit points left. She runs and shut the doors.

She limps back to her friends. The group just rests for a long time. Evelyn and Diath wake up and gain some hit points.

The group is really frazzled and can't agree on what to do next. Strix has a hilarious idea of magically disguising herself as Strahd to boss around any bad guys they meet in the temple. Diath thinks that won't help against the statue.

They finally decide to attack the flameskulls. They open the doors. Wow.. the flameskulls are readied! I didn't expect that from Chris. Three fireballs explode in the room. Egad.

I just paused it and looked up flameskulls (MM page 134). Check out the power listed after the magic resistance entry.

I don't think the group is going to survive this. Will the vestiges do something?

NPC Paultin goes down and... melts?!? As if he was made of ice and snow?! That wasn't Paultin!

I really hope people are watching this show. I don't think I can convey how fun it is through text. The group is really funny through the whole thing. This was a really classic episode, enjoyable in many different ways. Some of the things I liked:
Tactics: "Tactically" this group is a disaster, but that makes it fun to watch. If I was at the table, I would have begged Strix not to go off on her own.

Fudgy: At points in the show, I felt like Chris was pulling his punches a bit. I don't want the group to die, but you get that "fudgy" feeling when it seems like he lets the group get out of harm's way. What's weird is that at other times he was very brutal. Those flameskulls were right there, readied with fireballs.

It's an odd situation because if the characters all die, is the show over? Do they make new characters? I don't want them to die! I like these characters. They've got the live game in a couple of weeks, you can't kill them now, can you? Maybe Chris has something up his sleeve if there is a TPK.

Paultin: As far as Paultin melting, I have absolutely no idea what that is all about. If anyone has any ideas, let me know!
Posted by Sean at 9:06 PM

[Spoilers for those who haven't read the adventure]
I believe the Paultin that melted was the product of a Simulacrum spell. And judging by the NPC sheets at the end of the book, the only arcane spellcaster powerful enough to do it would be... Baba Lysaga*! Man, I really hope she does show up.

* I mean, discounting Exethanter who currently does not remember his spells and also Patrina Velikovna who is dead.

Also, I also look forward to meeting the real Kasimir if he's still around (and Chris bothers to use him at all).

On a side note, I remember a post way back at the beginning of the show in which you said that you had trouble picturing the characters in your mind. As for Paultin, I see him as the character on page 144 of the DMG. He kinda looks like Nate, so I can't unsee it!

I think he got Kasimir mixed up with Rahadin . . ?

I remember that about two sessions ago when he introduced the character Chris said Rahadin's name by mistake and quickly corrected himself, so I guess he's consciously using Rahadin posing as Kasimir.

I mean... we should've known it wasn't the real Paultin. for gods sake he shared his wine! his wine! like cmon we should've known from the start :P
so when Paultin melted, all his belongings melted with him... does it mean strix was drunk off of snow? gahhh i wish next week would come sooner

Utarefson: Simulacrum! Awesome. I see it takes 12 hours to cast. How long has Paultin been replaced by a simulacrum? Is it possible he was kidnapped when the group rested in the cellar near the brown mold? Someone had come in and cut her chains. Strahd did say he wants Paultin to join his side. I would say that it took a while for the group to gel on this show. I just looked at page 144.. you're right! It's perfect. Thanks!

Anonymous: Spoilers: Rahadin is pretending to be Kasimir. I think Chris accidentally called him Rahadin on two episodes but the group thankfully didn't catch it. When I write these things, I try not to spoil it for people who haven't played or run the adventure.

Anonymous: Ha, yeah he did share the win pretty freely. Strix was awesome this episode. I really wish Lathander/The Morninglord had answered her prayer in some way.

Question: Why would Strahd want Paultin to join his side?

Anonymous: A few episodes ago, Strahd tried to recruit Paultin through the doll. I think Strahd wants Paultin to either be his consort or as a Darklord in training, both of which are things discussed in the adventure. I have no idea what's going on with Paultin..