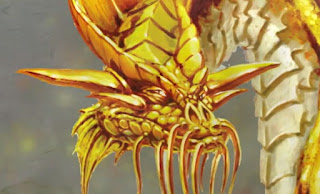 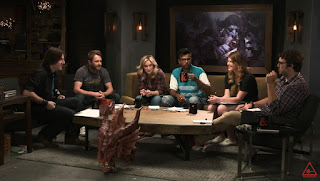 Last Time: The heroes fought a frost giant along with some ogres and goblins. The group is looking for a sun dragon.

The heroes want to rest as they are hurt pretty bad. The group wants Joppa to sing a shanty again. Brawlwin intimidates him into doing it using a dead ogre's head.

Dagny loots the giant. She finds a ring with a ram's head. Hmm.. sounds like a ring of the ram to me! Whil's identify spell confirms it.

As the group is getting ready to sleep, an ogre wanders into the camp. It wants Joppa's fish. Hitch says Joppa has a yeast infection.

Whil disguises himself as the frost giant the group just killed, except shorter. It doesn't work. The ogre is disappointed and leaves. Joppa offers the ogre some fish. He wants to see if he can befriend it.

The ogre gives Joppa a tooth that belongs to a great beast that he killed. There are more ogres, but they leave in search of food.

The next day, the group comes to a mining town. They ask around about the sun dragon. No one knows anything. They move on. 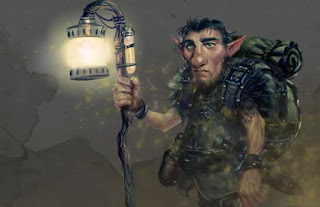 They come upon a smaller town. They meet a gnome who is frightened and runs from them. Brawlwin shoots an arrow in front of the gnome, which scares him and he stops running.

His name is Benskar. Whil ends up charming him. The gnome explains that the sun dragon protects the town. He will take the group to the dragon.

They head to a grass field dotted with rock formations. There's a wind rippled pool of water and a statue of a lady. Whil convinces the gnome to tell the group where the secret mines of the gnomes are. They are protected by illusions. Whil gives him a friendship bracelet and we actually get a graphic of it: 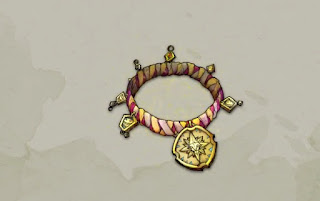 They explore a bit and find a statue of an elven maiden. Near it, there's a pool with coins in it. The statue is magic. Binwin taps it with her hammer. Dagny throws a coin into the pool.

The Sun Dragon lands behind them, invisible. The group talks with him a bit. It turns out the statue is alive. The dragon's name is Palorandask.

The dragon explains how the Ordning was shattered and now the giants are sort of running amok. There's one giant in particular that the dragon is concerned with. His name is Stratovan. Sounds like he is a cloud giant.

Stratovan has a piece of the rod of seven parts! The dragon explains that the rod does not want to be reassembled, as it is possible whoever wields the rod will be possessed by Miska the Wolf Spider. Stratovan has "4 or 5 pieces" of the rod!

The giant wants to use the rod to remake The Ordning. The dragon knows where one of the pieces is. He wants the group to go get that piece so that it can be hidden from Stratovan.

The dragon is old and weak. The piece is in a lost and forgotten sanctum of a mage in the Sword Mountains. 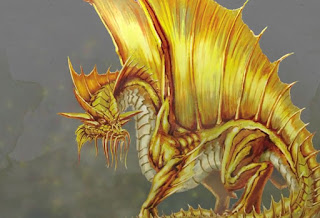 The Dragon gives each hero a boon:
Joppa isn't thrilled with his boon. He got adderall.

The NPC lady with the gun wants to leave now. Uh oh. The background music is telling us she is shady. I wonder if she is a Zhentarim.

The group picks up on it. Brawlwin creeps up behind her and presses her hammer against her head. The NPC says she doesn't do "heroic."

Brawlwin cracks her in the head. The NPC glares at Brawlwin and refuses to go on this suicide mission. She leaves.

The group gets on the back of the dragon. Brawlwin is scared of heights. Dagny has a clockwork blindfold thing.

The dragon flies the heroes to the place where the rod is. It's up to them to go in and get it.

Next Week: Brian Posehn at last joins the group.

Good show! So now we know the deal with the rod of seven parts. Acquisitions, Inc has a piece. This group will have a piece. And the giant Stratovan has either all the rest, or all but one.

I am looking forward to this. I kind of hope it ends up with Force Grey vs. Acquisitions Inc at PAX. 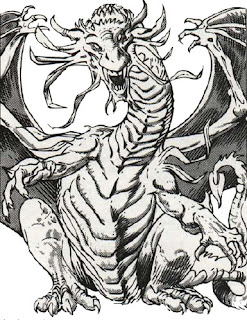 Sun Dragon: I am assuming this 'sun dragon' is actually a gold dragon, as that is the art they showed us. Sun dragons are from Spelljammer. They live on the sun, and they can "spit" fireballs. They can control exactly when the fireball detonates for up to ten rounds.

Sun dragon eggs are laid in caverns in the sun. When they hatch, they cause a solar flare. When a sun dragon dies of old age, they collapse in on themselves and become a sphere of annihilation! How awesome is that?
Posted by Sean at 2:16 PM

The "Sun Dragon" is actually Palarandusk, a semi-intangible gold dragon, he is mentioned featured in the Dragons of Faerûn 3rd Ed. book and he has his own magazine article in Dragon #252 (from 1998). Coincidentally, my Princes of the Apocalypse group is set to meet him because he is the group's sorcerer Dragon Ancestor. This FG episode just came beautifully timed to me because my group just arrived to Ieirithymbul (the gnome village) on sunday seeking for its "Unseen Protector".

Luis Castro: Cool, thank you. I'll check that article out. I'm not very familiar with the realms so this is extremely helpful. That's a cool idea to link it to a sorcerer. My sorcerer in my friend's eberron game has a gold dragon ancestor.