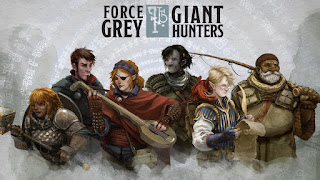 I guess this is the final episode! It is just about time for Storm King's Thunder

to be released, so I guess this will somehow involve Stratovan the cloud giant?

The PAX Acquisitions Inc show is on September 4th. You get the feeling something cool is going to happen. I wonder if they are going to put out a rod of seven parts adventure in 6 months? I would like that to happen some day, but I really have my heart set on a 5e Planescape adventure based in Sigil.

Last Time: The group fought some displacer beasts. They are in a wizard's lair looking for a piece of the rod of seven parts. Calliope is looking for a wizard named Ozwyn. 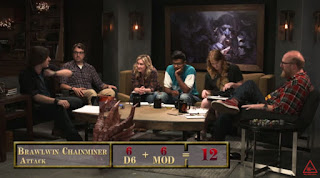 The group finds an old elf asleep or inert. His name is Belas. His mind was reduced to that of a child due to a failed experiment. Joppa gives him fish.

The group reads some of Ozwyn's notes about the Arcane Brotherhood, the Rod of Seven Parts, and his attempts at creating a vial of youth

While the group reads, Brawlwin checks another room and falls into a pit full of broken glass. The pit starts to turn. She pulls out her shield of flying. Joppa lowers his fishing line and she uses it to get out. Joppa says, "This is how people fall in love."

The group explores some more and comes upon a torture chamber. There's some notes about a golem that is out of control. They hear a noise and want to run. Skeletons on the torture devices animate. The group blows right by them to the next room.

At last they find the rod. It is in the chest of a golem! The golem is holding Ozwyn's corpse. We get an awesome graphic. 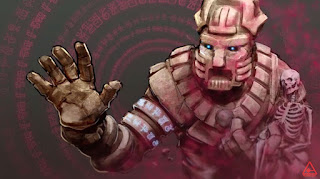 The golem does a pile of damage to Hitch. Joppa busts out his decanter of endless water and fires off a geyser of water to knock it prone.

Jonah keeps rolling natural 20's. Hitch tries to pull the rod out of its chest. Dagny is down and dying. Calliope heals her.

Joppa pulls the rod out. It was powering the golem, so it shuts down.

They go to leave. The skeletons are on the other side of the door. Dagny sends a clockwork mouse under the door. It's a bomb! The mouse explodes and destroys them. 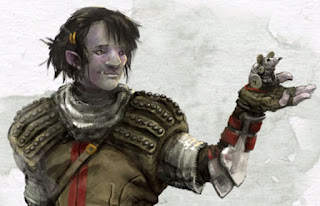 I love how Ashley is 100% into the game. She is really thinking about everything that is going on and she has a really cool character.

The group goes outside and there's a dirigible in the sky. They see Lemolai, the Zhentarim NPC who bailed on them a few sessions back. There's a total of 12 Zhentarim.

A spell paralyzes most of the group. The Zhentarim take the rod.

Suddenly, Palarandusk the gold dragon shows up. He's hurt. Apparently he was fighting the Zhentarim while the group was inside. He calls forth the forgotten chariot of Sustaire. It is a chariot made of flames! Two horses made of flame pull it.

I don't think I have ever heard of this chariot before, but it appears to be in the 1e and 2e handbooks. That's really cool that they incorporate all sorts of lore for these adventures.

Decent show. Looking at the whole thing, I'd say that this series isn't must-see. I like some of the characters and players a lot. I think you could just watch this episode and you don't really need to see the others.
Posted by Sean at 4:35 PM

Belas was killed by the bomb, along with the skeletons...