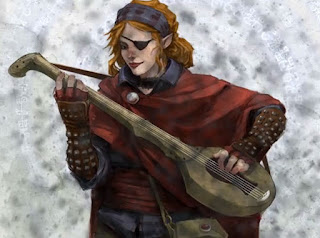 There's a couple of things to check out before we start. Last week, a commenter pointed out to me who the "sun dragon" is. It is Palarandusk from Dragon Magazine 252. He's the subject of an article written by who else but Ed Greenwood.

Here are some details:
Stratovan: A reader named Andrew let me know that the cloud giant Stratovan is the the person who hired Dran Enterprises to find pieces of the rod on Acquisitions Inc. So there's our connection! It could be that Force Grey will have the one piece of the rod that Stratovan needs. 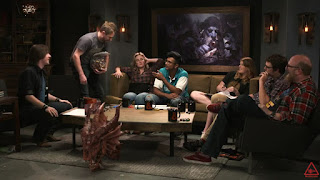 The heroes are about to go in to some kind of dungeon to retrieve a piece of the rod of seven parts.

To get in, the group will need to climb up to a stained glass dome that has been shattered. They take a bit of damage from falling rocks, but they are able to descend through the dome into the complex.

This was the home of a wizard. There is a statue of a female. Whil wants to kiss the statue. Brawlwin holds him back.

The group learns that the wizard was Ozwyn Ka, a member of the Arcane Brotherhood. They find notes about the fate of a half-elf (Brian's character). Apparently a scroll will fix it.

Whil finds the scroll and reads it. Calliope, Brian's character, appears. Brian Posehn joins the game. We get a cool animated graphic of Calliope. She actually moves around a bit.

Calliope shakes it off and wants to go find Ozwyn. Whil actually casts charm person on Calliope and succeeds. The door Calliope wants to go through is locked. Hitch tries to pick the lock for her. He has a thing for Calliope. Then stuff happens.... 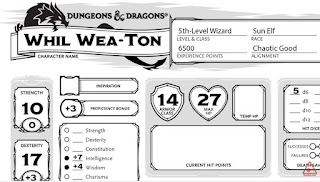 Dagny spots some kind of writing on the wall 8 feet above the floor. Whil checks it out. He levitates up to look at it.

Whil reads it out loud. He hears a shift of stone in the wall. The writing flares red. Dagny tries to grab him and pull him down. The ceiling and the floor slam together for... 54 damage!

Both platforms slam together. Dagny was holding his foot. It comes off. Whil is nothing more than a red taffy mess. Whil is dead! Dead-dead!

Dagny wants to resurrect him. No chance. Chris Hardwick loudly gives a comedic speech and then picks up his stuff and leaves. That's where we stop!

I kind of wonder if Chris Hardwick was there just to fill in for Brian Posehn? It doesn't really matter. Honestly, I found his antics to be annoying. I'll be happy if Brian takes his place for good.

You should definitely check out the last ten minutes of this episode. A lot of the players seemed to be extremely shocked that he actually died.
Posted by Sean at 3:59 PM

Posehn's D&D style is not totally different from Hardwick (they used to actually be in the same group with Patten Oswald and the people from the first campaign of Posehn's defunct podcast Nerd Poker: Dungeons & Dragons with Brian Posehn and friends), if you haven't listened to it, his now ended D&D podcast had its moments and was one of the earlier high profile shows to do it (though it may now be behind a paywall in the Howl App); though actual play is a bit loose in what it was, like Adventure Zone, it was a comedy podcast first, D&D game second (it started as a 4e game but everyone was too confused by the new edition so they de-booted it back to a heavy house ruled AD&D; the first campaign is pretty good once they get the hang of it, the second campaign is hit or miss do to massive cast turnover (work and family stuff meant they lost over half the cast in less than a year and it took awhile for them to replace everyone, and by the time they did, Posehn couldn't commit to a regular show anymore)).

Anonymous: Ah thank you for the info. I probably should have checked out Nerd Poker when it was around. They use AD&D rules, that's pretty awesome. It is really disorienting to play that edition once you're used to 4th or 5th. I hope Posehn isn't too much like Hardwick.