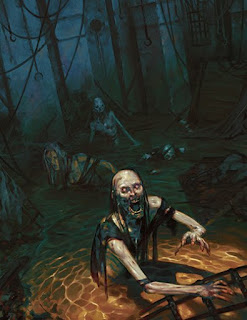 I got Storm King's Thunder

today! I'll be working on the guide for the next week or two. They actually listed the sources of products that they drew material from in the book, which is really cool and handy for me.

Chris Trott returns this week. He plays Falkon, the wereraven. Falkon fought alongside the group against the hags at the Old Bonegrinder in a session that was an early highlight of the campaign.

Warning: This is one of those episodes that I think you should watch first before you read about it. There's a ton of good stuff and it's pretty hilarious the whole way through.

Last Time: Paultin is in Castle Ravenloft. He agreed to be an ally of Strahd. The rest of the group is trapped in the Amber Temple checking out some vestiges aka, the Dark Powers of Ravenloft. 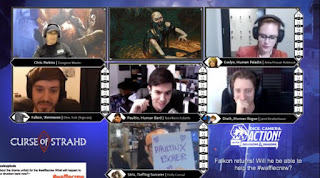 In the temple, the group finds the Tome of Strahd. Strix is going to use mage hand to pick it up. Suddenly, an amber golem becomes visible. The group slips back through the crack and escapes before the golem can attack them.

The group wonders if it is night time outside. They have no idea. Jared hopefully points out that maybe if Evelyn doesn't know that the moon is out, she won't transform into a werewolf.

The tome has a clasp. It's locked. Diath tries to pick the lock and rolls a 28. Nothing! Diath remembers that he has a mysterious set of keys from the beginning of the campaign. One of the keys opens the lock. Diath says when he was a beggar, a mysterious person gave him the keys. 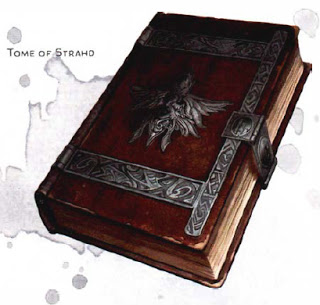 Chris reads out the entire handout passage of the tome from the Curse of Strahd book. A lot of times, DMs reading long passages out loud is pretty brutal, but Chris does the Strahd voice and does it really well.

The ultimate DM challenge: Read the gigantic boxed text from the Temple of Elemental Evil intro on page 27 out loud to your group.

I think the key to reading text aloud is to think about what you are reading and to vary your tone. Make it like you are saying it somewhat passionately and use emphasis, rather than reading it out in monotone. I think you need to make it feel like a roller coaster, if that makes sense. You are trying to take them on a ride and keep their interest. It's hard!

One of the vestiges is active. Strix wonders if it was these things that turned Strahd in the first place.

Love Springs Eternal: Meanwhile, Paultin sits down with Escher. Escher comes on to him really strong. "Is there anything I can do to make your stay more memorable?" He licks Paultin's cheek with his dry tongue.

Chris loses his connection for a minute and the group does a bunch of hilarious stuff.

Chris is back. The group goes and talks to the lich. I love the wheezy voice Chris does for the lich. The group finds the lich's spell book. 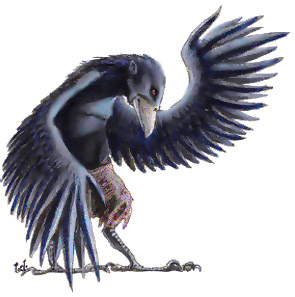 Back in the castle, Escher really wants to drink a bit of Paultin's blood. Paultin is able to convince the vampire to hold off on that. Escher leaves. There's a raven at the window. It's Falkon the wereraven!

He is naked, as that is his gimmick. Falkon says that they are going to need to take down Escher. Falkon transforms into his hybrid form. He is a raven-man.

Falkon hides outside the window. Escher comes back in the room and suggestively feeds Paultin a scone. Paultin casts suggestion and apparently succeeds. He suggests that Escher should stop being loyal to Strahd.

Paultin invites Falkon in and apparently the three of them are going to try to take down Strahd. Falkon takes his human form.

But wait. They know each other! Falkon is Escher's ex-boyfriend! Uh oh.. Falkon wants to fight Escher. The players are freaking out.

The Curse of Lycanthropy: Back in the temple, the lich's spell book has remove curse. Evelyn kind of wants to remain as a werewolf. The lich points out that Evelyn is only a half-werewolf. Once she kills a humanoid, she will be a full werewolf and she'll be immune to non-magic weapons. The lich is amusing. He is trying to convince the group to let Evelyn remain a werewolf.

Strix has to learn the spell before she can cast it. Evelyn prays to Lathander and gets a response:

I am really curious, so I am going to look up what these entities do. I want to see what Strahd was trying to pull. Skim down to "insight check" if you want to avoid the spoilers:
Also remember, with each gift, she needs to make a DC 12 charisma saving throw or become evil! She has a high charisma, but having to make 3 checks is definitely risky. The book says that if the character becomes evil they are an NPC. I bet Chris would let Anna kept running her character. She could play it fine.

So yeah, Strahd was trying to give Evelyn a major boost. I bet he wants to corrupt her, turn her and make her one of his vampire brides.

Chris was all over this the second Anna said she was praying. I think he had come up with this idea over the week. Possibly the idea was sparked by Strix praying to Lathander a week or two back and getting no response.

Insight Check: OK, tangent over. Evelyn makes an insight check. She realizes that the entity that answered her prayer is not Lathander! Nice. Then she hears a deep-throated voice laughing. Evelyn realizes that it is Strahd. She utters a Wrath of Khan-style "Strahd!"

Anna is a really good player. I know a ton of players who wouldn't have thought to make that check on their own with no prompting from the DM. 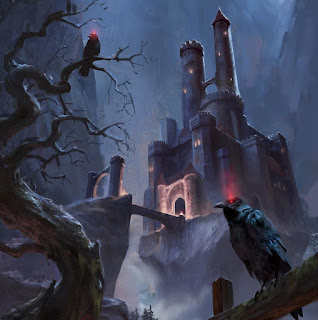 In the Castle, Escher senses this. He tells Paultin and Falkon that the Master is awake. Falkon... sinks his teeth into Paultin's neck?!? He rolls a natural 20!

He wants to turn Paultin into a wereraven. Awesome! Paultin makes his save. Seems like Chris really wants Paultin to turn. It would be cool. Plus, then Paultin can just fly out of the castle.

Paultin could also go back down to the room and throw a gem into the fire to open a portal to somewhere else in Barovia. But he's got to get down there. I still think he should try to find the Sunsword.

Paultin convinces Escher to let them leave. Falkon goes into hybrid form. He tries to carry Paultin and fly away. They get out the window, but Falkon only rolls an 11 on his strength check. Paultin is too heavy. They will need to land in the courtyard.

Suddenly, three crossbow bolts plunge into Falkon. They're silver! He takes a pile of damage and is dropped to 0. Good gawd, this is going to be bad.

As he falls, Paultin spots the assailant on a parapet. It's.. Ezmerelda?! What??! Her face is pale. Did she become a vampire? 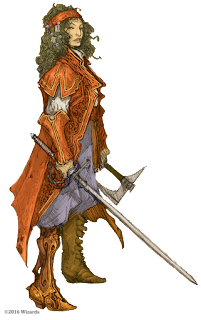 That's crazy. She is supposed to be his ally! Paultin is falling. Paultin uses Falkon's body to cushion his landing. Paultin didn't even think twice about it. Poor Chris Trott is done.

Remove Curse: Back in the temple, Strix has learned the spell. Evelyn really, really doesn't want to have the spell cast on her. For the spell to work, Strix has to touch her. Evelyn keeps dodging her touch.

I agree with Anna, the werewolf thing is cool. Evelyn finally consents to the spell and takes a final sniff of each hero. Then Strix casts the spell. Evelyn is back to normal. I hope she gets to be a werewolf again soon in the campaign. It was very cool.

Also, on the last night they rested, she didn't turn. It's possible that she wouldn't have turned again for another 20 days or until the next full moon.

No game next week!

(38:24) Diath points out that Strix traumatized Strahd
(46:47) ProJared takes over the DMing duties

This was one of the best sessions of the whole campaign so far. Chris set up stuff long ago that he was able to pay off, there were surprises, and (best of all) everybody was hilarious. Nate was really good this week. Everything was perfect. Definitely watch this one if you can!
Posted by Sean at 11:34 PM

It was really incredible to see Nate last episode vs this one. Felt like someone flipped a switch. I'm really glad it seems like he's finally settling into his role.

Anonymous: Agreed! Weirdly enough, I actually felt proud of him. It was a great episode. I really hope this show grows into something big. They deserve it!

See the thing is, I knew Nate was capable of delivering in the roleplaying department. His performance on one episode of the Game Grumps show Table Flip (the episode in question being "Bang!") was the best part of that episode. And that's saying something, because that episode had a ton of fantastic moments. Everyone really got into character despite it being a board game and not a roleplaying one.

On a side note, you should watch that episode. It has Jared as well, and he and Nate interact in a very different way from this series (due to their characters' roles that is).

Agreeing with all of you.
I hope the two-week break between this and the next episode won't throw him out of the groove again. While Nate is fairly scatterbrained under pressure and thus his own worst enemy, it seems like he's genuinely enjoying playing despite his difficulties, and when he shines, it's a treat. That's why I love ALL of the players and their characters to bits.
Poor Falkon, though, crushed into a Wereraven pancake. (Not even a waffle.)

Anonymous: Yeah, poor Falkon. I guess Chris Trott could always come back and play a new character. I hate when they skip a week! This one is pretty much unavoidable though, with PAX and everything.

Anonymous: Cool, thanks for the heads up. I've never seen Game Grumps. I'll check it out.

I'm watching this to help me running curse of strahd, I usually don't like watching other people playing, but I was on the edge of my seat in this one! Great episode.