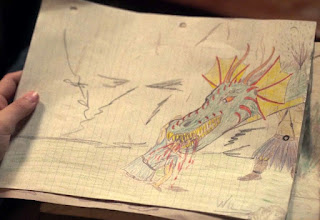 The Party
NPCs
OK, let's see what happens next. A body was found in a quarry. People think it is Will Byers. I have no idea what is going to happen now.

Good old Officer Jim Hopper tells Joyce that Will is dead. She tries to tell him that Will is in the Shadowfell but of course he thinks Will is far too low level to cast plane shift.

Look at Winona go. She is legit weeping and putting it all out there. She's awesome.

The cops leave. Joyce goes to get an axe! She's waiting for the thing to come back. 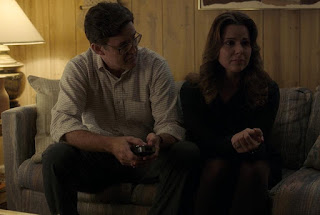 I really like Mike's mom. I would take her on a date to one of those japanese steak places where they cook the food right in front of you. It would be great.

Mike is going off on Eleven while looking at some sweet D&D drawings. Eleven uses the walkie talkie to tune in to Will! They hear Will singing that Clash song to himself. Mike tries to talk to him but it goes away. Her nose is bleeding. She had to use her powers to do that.

Mike's got a sweet Dark Crystal poster in his room.

Officer Hopper finds out some mysterious people did the autopsy on Will. So what's the deal, is this body a fake construct or something? Joyce sees the body in the morgue and she is convinced it is not Will.

The lame boyfriend is more concerned about getting caught drinking beer than the fact that Barb is missing. Aha! Nancy realizes this guy is a tool and storms off. Nice. This fellow needs to have a slice of humble pie. 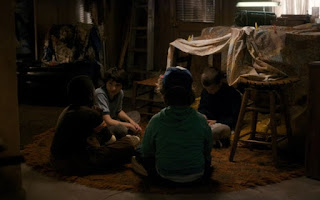 Mike tries to convince his friends that Will is alive. They decide to go to the school and use the CB radio, because it's more powerful. They need to smuggle Eleven in, so we do the E.T. thing and dress her up in lady clothes.

In the lab, Dr. Brenner sends a guy in a radiation suit through the portal. He's attached to a cable. We don't see what's in there. Later, they try to pull him out, but all that comes out is a bloody piece of the harness he was wearing.

Nancy talks to the cops about Barb. Poor Barb, nobody seems to care that she's missing except Nancy. Nancy's mom realizes that Nancy made sweet, sweet love to that dumpster fire. At home, Nancy puts the torn photo of Barb at the pool together. The creature is in the photo! Vaguely.

The kids have to go to an assembly about Will's death. This bully just keeps getting worse. He laughs about Will being dead. After the assembly ends, Mike shoves him to the ground. Bully tries to lunge but Eleven stops him and he pees himself in front of everyone.

I don't know if you guys saw the TV version of Stephen King's It from the '90's, but we have a sort of Henry Bowers thing going on here. There's a clip I wanted to link to, but I can only find it in Russian.

Nancy shows Jonathan the photo he took and suddenly they are on the case, looking for a man without a face.

Wow, everybody's on to this thing, now. Hopper questions the guy who found the body and the guy isn't cooperating. So Hopper beats his ass! It turns out the guy was told not to let anyone get too close to the body.

The kids can hear Will through the CB. Joyce can hear Will banging on the wall. She tears the wallpaper off and it's like a Silent Hill meat wall. She can actually sort of see him through it. He has to go hide, something is coming. Wow. Crazy! Eleven is using her powers to let the group listen in on this, but the CB catches fire.

Hopper goes to check Will's body. He tries to bluff past the cop and ends up punching him out! He cuts open the body. It's stuffed like a pillow. It is indeed a fake.

Hopper goes to the lab at night. He cuts through the fence. He's busting in!

I love how everything is coming together and everyone is on the same page. I never liked it when they have certain NPCs who refuse to believe what's going on until the last two minutes of the film/series or whatever.

It feels like things are progressing so fast that I wonder how they will fill four more episodes.
Posted by Sean at 4:14 AM