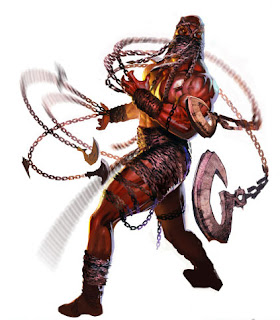 Last Sunday we played another session of Planescape. We're now ramping up to the end of the Tales from the Infinite Staircase storyline. There's a lot of adventures in the book that I didn't really care for, so I've ended up making my own weird version of the events.

We should be done with this in a couple more sessions. Then I plan on doing a few sessions in Sigil where I want to have some sessions where we can really dig in to each character. I want to make sure the players feel really connected to their character so that when the whole thing is over, they'll have fond memories of it.

Then I'm going to run the Hellbound adventures. That boxed set is all about the Blood War, which is the eternal battle between lawful devils and chaotic demons.

I prepared the first two adventures of that and honestly, I don't like them very much. The first one I can tweak. The second one.. I might just chuck it. The third one, Squaring the Circle, is supposed to be really good.

The thing I like least about the Blood War Planescape stuff is the heavy focus on yugoloths and celestials. In my opinion, there are more than enough types of demons and devils to make it interesting. Adding the yugoloths, who I've always felt were confusing, seems unnecessary.

My plan is to incorporate Drokkarn the pit fiend into my version of the Hellbound adventures. I'll probably make some of my own scenarios, too. I think I'm going to watch some war movies and then translate them into D&D.

Last Time: Theran trapped the Iron Shadow (the bad guy who is unmaking plane) in his spellbook. Bidam sold his soul to a devil and was summoned by the devils trying to control the Iron Shadow. 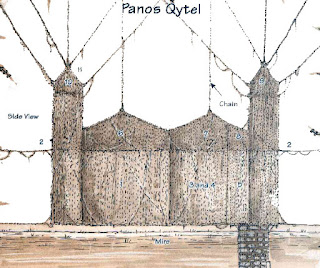 Theran and Drokkarn, the pit fiend were shocked to see Bidam vanish. They figured out what was going on, and left Iggwilv's manor. They used the cubic gate to travel to the astral plane, and then entered a door to the Infinite Staircase.

Drokkarn knew the location of a door that lead to Minauros, the level of hell that the bad guy city of Jangling Hiter was located.

Meanwhile, in hell, Bidam was chained up. All of the devil villains were there:
Quimath took all of Bidam's stuff and decided to keep the sword of sharpness for himself! The plan was for the gorechain devil to kill Bidam, who would then be reborn as a devil under the contract devil's control.

They left Feurina to do the deed alone. She shares Bidam's memories and he shares hers. Bidam realized he knew the layout of the fortress, and he felt like he might be able to communicate with hell hounds.

Feurina left him with the hounds, allowing him a chance to escape. He was able to convince the hell hounds to free him. Bidam grabbed Feurina's flaming sword and wrapped chains around him a kind of makeshift armor. I guess you could say it was... chainmail! Dad joke.

The stairs beneath Theran vanished. Drokkarn flew down and caught him. Together, they flew to the door, narrowly outracing the unmaking process. 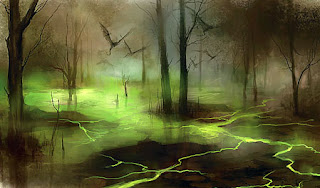 They appeared in Jangling Hiter, the devil city made entirely of chains. It is suspended over an infinite bog. They decided to take a secret entrance into the fortress, guarded by a black pudding. They destroyed it, went up into the fortress and bumped into Bidam, who was sneaking around.

Bidam knew the layout and led the group to Quimath's area. There, Quimath, the gorechain devil and the contract devil were looking at the Iron Tome, watching the Iron Shadow destroy the Infinite Staircase.

The heroes attacked, focusing on Quimath. They hoped that if they defeated him, the others would surrender. The adventurers were quite alarmed when they realized that since he was a devil, if Drokkarn died here in hell he was obliterated forever. 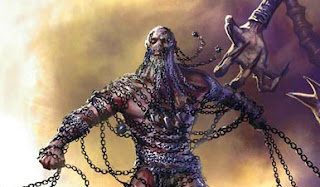 Theran launched lightning bolts and then Bidam tore into Quimath. Quimath used his power to appear as creatures the heroes fear. He turned into Coirosis, the Rust Dragon! The frightened condition is really nasty!

Once that was done, they were able to destroy Quimath!

The other devils gave up. The group took all of the contract devil's contracts! They made him sign them over.

So that means that the group has some devils bound to them. They were very excited about this. I'm going to cook them up for next time. There are some cool devils in the Pathfinder Bestiary 2 that I might use.

My plan for next time is to run the Limbo adventure in the book, where the group needs a certain substance called Navimas to defeat the Iron Shadow. Then we'll do the final battle with the Iron Shadow, which I am going to try to run like an elaborate video game "boss battle."

Man, these are great. An inspiration in terms of cool plot twists.

Thanks! It's weird how once I stopped preparing so much, things have gone better.