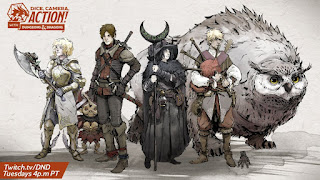 This is a complete list of every recap and episode of Dice Camera Action. 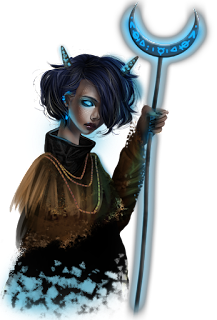 Episode 3: The Waffle Crew gets a fateful Tarokka reading that determines many aspects of the adventure:

Episode 4: The group has a sprawling battle with hags that live in a windmill.

Acquisitions, Inc - Enter the Trash Witch: Strix learns more details of her origin and doesn't get along with Jim Darkmagic.

Episode 61 - End of the World: The adventurers make a deal with Shemeshka.

Episode 63 - Bad Dates: The Sewn Sisters creep everyone out.

Episode 64 - In Guide we Trust: The heroes acquire protection from the Soulmonger.

Episode 65 - Bait and Twitch: Live from TwitchCon, the crew heads into the jungle of Chult.

Episode 67 - Vengeance is Mine: A camp in turmoil and a grung ambush await the Waffle Crew.

Episode 70 - The Serpent Eats the Sun: Wumba returns and Evelyn gets into it with Dendar.

* Episode 71 - Flower Power: The waffle crew meets with the oracle of Orolunga.

Episode 74 - Gods Rest Ye Merry Waffle Crew: The Waffle Crew is at last in the lost city of Omu!

Episode 75 - Apex Predator: Everyone wants the ring of winter.

Episode 76 - Band on the Run: The battle with the red dragon.

Episode 77 - Come Slither: The heroes enter the fane of the yuan-ti.

Episode 80 - Kaboom it May Concern: The egg bomb is about to explode!

Episode 83 - Ice in the Veins: Paultin vs. the Waffle Crew!

Episode 84 - Domain Event: What happens to the Ring of Winter?

* Episode 85 - Two and Two Together: The heroes meet the Raven Queen!

Episode 88 - The Awful Crew: The evil versions of the heroes roam Port Nyanzaru.

Episode 89 - Double, Double, Toil and Trouble: The group at last gets the items they need from the Sewn Sisters.

Episode 91 - Rise and Shine: Evelyn and Simon rejoin the group!

Episode 93 -  The Storm Before the Calm: While sailing to Waterdeep, a storm threatens to sink the ship.
Posted by Sean at 8:37 PM

Are you looking for CCTV Installation Redbridge. Our company providing you the best services of CCTV installation services.