Lore You Should Know - Nautiloid 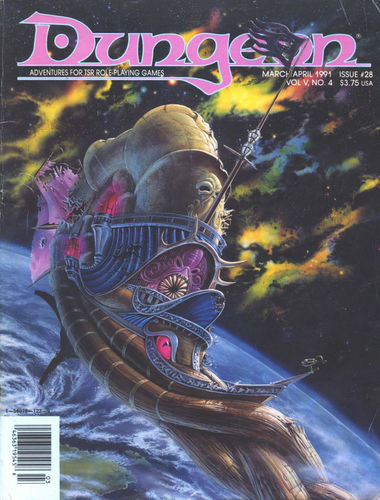 The D&D people just put out a video on a topic near and dear to my heart - the nautiloid.

What is that? It's a ship - a mind flayer ship. It is featured in the upcoming PC game, Baldur's Gate 3.

Dungeon Magazine's first spelljammer adventure was all about a crashed nautiloid that the group could clear out and keep! I think that the adventure depicts it as too damage to fly, but I did away with that and I bet other DMs did too. I assume that many groups ended up with this ship when they decided to head into wildspace.

Namin their nautiloid "The Mystic", my group had a number of really fun adventures during one of my first, and most successful, D&D campaigns.

The 2e Nautiloid seems to be different than the 5e one. The "tentacles" on the 2e nautiloid didn't move - they were just part of a wooden ram.

So let's see what we can learn about the 5e nautiloid!


Chris Perkins and Greg Tito are tackling this topic. Greg says you should definitely check out the Baldur's Gate 3 trailer. Chris repeatedly refers to this ship as a creation of Larien, the studio that made Baldur's Gate.

Chris begins by explaining that, a nautiloid is a mind flayer vessel that moves through air, space, and the planes. It is the primary vessel that mind flayers use to travel. Nautiloids first appeared in the Spelljammer campaign setting.

The ship has a shell and tentacles, and is similar to the nautilus from 20,000 leagues under the sea.

The new nautiloid has tentacles that can grab people and teleport them to the interior of the ship. It can also plane shift, which the pilot activates by thrumming on a cord - similar to the tuning fork that is a component of the plane shift spell.

The mind flayers can't build them any more, because their empire is so fractured. There are a finite number of nautiloids in the multiverse.

The primary purpose of the nautiloid was to allow mind flayers to go from world to world, to seek out new slaves and their delicious brains.

There are different mind flayer ships. There is the illithid dreadnought, which elder brains can travel on. They also have smaller shuttle crafts.

Spelljammers normally are powered by helms, but nautiloids are powered by pools that draw psionic energy from their mind flayer pilots. There is speculation that the ships are somewhat sentient. During construction, liquified brain matter is pumped through the ship, and that brain matter has a sort of collective consciousness.

Chris points out that Dungeon Magazine #28 had an adventure with a crashed nautiloid. Chris actually has a copy of the issue on hand. The ship in this adventure crashed in the Forgotten Realms, east of Neverwinter.

In Dungeon of the Mad Mage, there is an illithid ship, which is more of a shuttle. The idea is that if you can figure out how it works, you can use it.

Chris and Greg begin discussing possible campaigns involving mind flayers and nautiloids. You could start a campaign on a mind flayer ship as a prisoner. You free yourself, but you're stuck on the ship.

Chris has an idea that a bunch of nautiloids are converging on a world that the mind flayers are looking to overtake.The heroes need to go up there and stop them.

Chris mentions that The Speaker in Dreams is a 3e adventure where there's a town that's been secretly taken over by mind flayers.

If Chris was a nautiloid captain, what would his name be? Captain Tentacleese.