On Sunday night, we finished up Umbra. I think it's safe to say that the adventure more than lives up to its reputation. If you break it down, here's what it has:
On top of that, you've got a bunch of cool street encounters which include a hag pushing a wagon full of maggots and some barghests bringing captives to a jail.

In addition to all that cool stuff, there's a bunch of NPCs that really jump off the page and a lot of really well done flavor text. The read aloud stuff is long, but it's so fun and full of engaging stuff that it didn't bore anybody. In fact they actually asked me to repeat some of it because they liked it so much. 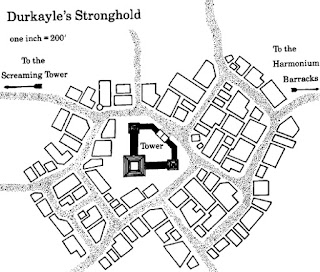 Gargoyles grabbed the adventurers and flew them to Durkayle's compound. Their mission: steal a kid named Umbra. Apparently, she was the chosen one of some long-lost faction called the Zactars.

Durkayle's compound had a tower and a courtyard teeming with Harmonium soldiers. Bidam drank a potion of giant strength, removed the bars from the highest window in the tower, and entered with Theran.

There was a lot of creeping around. They messed with an orb that could turn you lawful if you touched it. They listened at some doors. They decided to use a grappling hook and rope to lower down to the next floor and peer in some windows. They spotted a woman in a room with a baby carriage. They figured that was where they needed to go.

The heroes went down some stairs and knocked on the door and spoke to the woman. She was Emalica, and while she appeared to be an elf in a red gown, she was actually an erinyes.

Emalica was technically one of the child's guardians but, being lawful evil, Emalica hated the kid and wanted her gone. She charmed Bidam and politely advised the heroes on the best way to "rescue" Umbra.

She explained that Umbra was Durkayle's daughter. The mother was a succubus who was apparently out of the picture. The Harmonium would be outraged if they found out that Durkayle had a dalliance with a succubus, so he kept her hidden in the tower.

The heroes never got to check out the baby carriage, which is too bad. It's full of poisonous snakes! Snakes that Emalica uses as ranged weapons! Why, I don't know, but it's awesome so who cares.

The adventurers were introduced to Umbra by Emalica. Theran was able to win Umbra over by doing some magic tricks. She showed them what she could do - she could teleport. This power would come in handy a few times.

Then... Durkayle came home. He'd returned from a failed mission in a gate town. The heroes heard him talking loudly down the hall. Theran cast a fly spell, grabbed Umbra, and flew out the window into the night.

Bidam thought for a second and decided to jump out of the window. He plummeted to the ground, took a big chunk of falling damage, and then bluffed his way past a Harmonium guard as he limped to the gate.

The heroes reunited outside the gate with Umbra. Dirngrin, the cambion who got them into this mess in the first place, was there to whisk them away. The heroes didn't realize that Dirngrin was about to double-cross his boss.

He teleported the heroes and Umbra not to the Zactar Cathedral, but to a room at The Black Sail Inn where Umbra's mother, the evil succubus Karilyn, was waiting.

Karilyn has a bunch of fun flavor text, trying to cajole Umbra into hugging her. Umbra shied away. Eventually, after a bit of discussion, the heroes tried to take Umbra and run. Dirngrin, the schmuck, did nothing. His sidekick, the barlgura, attacked.

Karilyn charmed Bidam and then kissed him, which normally does 32 damage. Bidam made his save though, so he took 16 points. He snapped out of the charm and attacked her.

Out in the hallway, the barlgura tried to snatch Umbra. Barlguras in 5e can jump 40 feet (and 20 feet high), so he tried this maneuver where he tried to jump over Theran, grab Umbra, and then crash out of the window down to the streets of Sigil with her in his clutches.

Umbra ducked, though, and the barlgura exploded out of the window and hurtled to the ground.

Karilyn took flight. The heroes really wanted to subdue her and hand her over to Durkayle, but she escaped with just a single hit point remaining. People in the bar below ran up to see what all of the commotion was. Turia, the crabby tiefling who is Inimigle's girlfriend, helped cover for the heroes in her own dour way.

Turia is a very interesting NPC. She is also in "Nemesis", the other Perkins Planescape adventure. In that one, she has a new boyfriend - Rule-of-Three, a major Planescape NPC. 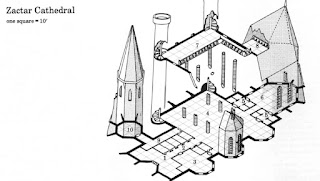 The adventurers took Umbra to The Zactar Cathedral, where apparently she could fulfill her destiny. Umbra immediately liked the place and knew the layout intuitively.

The cathedral is a magic dead zone. No magic spells or magic items worked inside! This obviously was a big problem for Theran, the party wizard. Umbra said she was pretty sure there was a grey orb in the temple that controlled the magic dead zone.

She lead them through the building, but an enemy was waiting - the 4 armed gargoyle from the screaming tower, Eyarq. He wanted to snatch the kid and ransom her off! The heroes were able to just barely hold him off as he tried to snatch Umbra.

They delved further into the temple, and came upon a statue of a woman with bat wings, holding out her arms. She had a strange symbol on her palm, just like Umbra. I don't think the heroes ever realized that this statue depicted Umbra in adult form.

The statue held a grey orb, which indeed controlled the dead magic zone. Bidam was hit by a lightning trap. Then, after a lot of amusing guessing, they figured out the command word of the orb - Zactar.

With the orb shut off, magic was now usable in the cathedral. The adventurers met with Inimigle in the portal room. I was wondering if the heroes would be paranoid, but they weren't. They let Umbra walk right into that swirling pool.

There was a flash, and three statues came to life - they were the last of the Zactars, delighted to finally meet Umbra, their god (they called her The One True Being). Inimigle was free, and he has this really weird and funny celebratory dialogue:

"Free at last! Oh, the joy! Oh, what merriment! Let the horns sound and the whistles blow! I am FREE! No longer must I ruminate in this ghastly sepulchre of a church!"

So it looked like Umbra was going to stay in the cathedral and Sigil might have a new faction on its hands.

Then, the heroes go to leave, and a pile of people are outside. Durkayle, some barghests... and Karilyn the succubus, all bandaged up! The mother and the father of Umbra were arguing.

The heroes hated Karilyn and seriously contemplated attacking her right there. I had actually been foreshadowing her for a long time in this campaign with Vrischika, who is an alu fiend who had been on the run from the demon lord named Karaphon who collects alu fiend slaves.

The whole thing culminated in more flavor text, where Umbra transforms and ages 6 years in 3 rounds. Umbra admonished both of her parents, and told them to leave her be forever.

Karilyn flew off, angry. Durkayle swore revenge on the heroes.

That's where we stopped. If there's any negatives about this adventure, it's that there is no final battle. The heroes could end up just kind of riding out the flavor text at the finish.

But by the point you get to the end, it's been so awesome that it's not a big deal. This is a fantastic adventure!

Next week, we begin Dead Gods, another very highly-regarded planescape adventure. The heroes are 5th level, and they'll probably hit level 6 by the end of next week or the week after.

Click here and jump in to session one of Dead Gods.
Posted by Sean at 2:02 AM 11 comments: