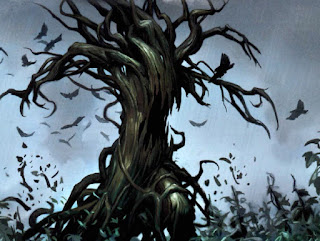 Just so you know, I'll be putting my Guide to Curse of Strahd on the DMs Guild a week from this Friday. I think I'm going to add in the things I have learned from this show to it.

Last Time: Evelyn brought Strix out of an evil hallucination by hugging her really hard. The heroes got rid of the evil druids at the winery and now they have traveled to Yester Hill to find a magic gem.

When we stopped, Evelyn was about to pull an axe from the trunk of a giant evil tree. There is a giant wicker statue of Strahd.

Blood pours out of the tree when she removes the axe. She can tell it is magical, but she's not sure what it does.

Evelyn holds the new axe in one hand and her magic axe, Lightfall, in the other. She asks the group if she looks cool. She does.

They hear the Friday the 13th noise coming from the stone circle. They smell death on the wind and hear an evil voice calling for its master.

Strix wants to burn the tree down, but Diath points out that if they do that, any creatures in the area will see it.

There's a creature dancing around the wicker Strahd saying "Wintersplinter" over and over. If you're reading along in the Curse of Strahd book, check out page 200 Druids' Ritual for the crazy stuff that might happen. 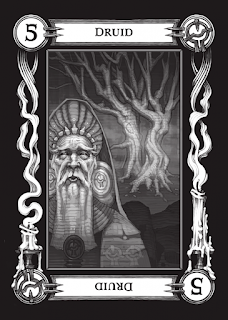 Strix gets scared and casts fireball at the chanter and the wicker effigy. Now the statue is on fire, which is going to make things more complicated.

The druid takes 23 damage from the fireball and is still standing. In case you are wondering, the statue has 50 hit points. It is burning and taking an additional 2d6 per round.

The druid continues dancing around the statue chanting "Wintersplinter." A tree bursts out of the earth under the statue. It is big, evil and animated. It picks up the druid and bites him in half.

More dirt-caked human barbarians burst up out of the ground wielding great axes. They charge the heroes.

Paultin casts invisibility on himself. Diath hides behind a stone. Strix and Evelyn are feeling a little alone here as the other two are hiding. Anna's dog makes a guest appearance. 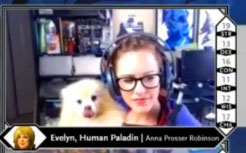 Barbarians run up and hack into Evelyn. She has to make a concentration check, as she has a moonbeam spell going. Chris actually looks up concentration check rules in the book. This is why I made that forgotten rules index (cheap plug).

Evelyn's concentration is broken. Chris says that her moonbeam spell may remain there for one minute, but she can't control it.

Evelyn blocks an attack on Strix with a "Mom arm" (which is a little like stopping short), reducing a critical into a regular hit.

The tree leaves and starts heading north. Diath thinks it is heading for the vineyard.

Chris is rolling insanely high. He rolls a critical on Evelyn and drops her. Chris later realizes that Evelyn is actually still up. She only was taking half damage because she's a werewolf and they only take half damage from non-magic weapons. Wow.

Strix drops a fireball right down on the party, using a sorcerer power to protect the group from it.

Poor Paultin has been rolling really, really bad. The last bad guy is very close to death. Paultin has a chance to kill him. He does!

The group jumps on their horses and chase after the tree blight. Anna invents a new way to talk about hit points: She has "25 units of well being."

Wow, Jared is smart. He points out that the axe they found might do special damage to the tree and that's why it was stuck in the other tree. He is exactly right. Evelyn soon names it "Treebane."

The group wants to trip the tree. It doesn't work out. The tree does stop and turn to fight the group. 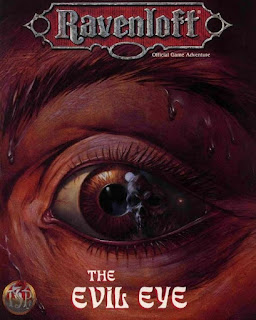 Paultin decides to use his vistani evil eye power. He can curse the tree and do all sorts of stuff. He chooses to make it vulnerable to fire.

Strix uses sorcery points to regain a spell - fireball!  With the vulnerability factored in, it does a total of 64 points.

Diath spots a weird glow in the trunk of the tree. The gem they need is inside it! Diath has a great idea - use Paultin's wine to make a molotov cocktails. He uses his cunning action to jump off the horse and climb the tree!

The tree pummels Evelyn, knocks her out and throws her into the forest.

Diath blows the tree up with his cocktail, literally. The gem plops at his feet. It is full of good magic

It's a good show every week! This one was very combat-focused and it felt more like most of the D&D games I see people play. I don't know if this is still the case, but in my experience most games of D&D are more like this session and less like the stuff I see happening on Critical Role. I'm not saying that one is better than the other, I'm just saying that this session in particular really felt like a "real" session of D&D to me.

Now I "Get" Yester Hill: I think if I had run Curse of Strahd, I would have handled Yester Hill really poorly. Watching Chris do it, I see all sorts of mistakes I would have made. I don't think I understood the druid ritual when I read it and honestly I didn't even remember about the tree blight under the statue. The fact that there is the Gulthias tree on the hill confused me. I thought the Gulthias tree was Wintersplinter when I read it.

Alterations: From what I can tell, Chris changed some stuff again. In the book, if I understand it properly, there's supposed to be 10 rounds of chanting in order for the blight to rise up. I would guess he just had this go off after a round for dramatic effect. Also, in the book, Strahd makes an appearance during this ritual. It's possible Strahd was there, unseen. The druid did call out for "Master," if I heard that correctly.

I know that none of the stuff in the book is set in stone. I like when Chris deviates from the book. It gives us new material to work with if we like.

Again, I'd say that people need to watch this show if they are going to run the adventure. It helps so much.

Anna: Anna was in a really good mood this week. She was pretty much hilarious from start to finish. Evelyn is a classic D&D character.

Strix: Holly is really on the ball with her character. She got to really unload in the battle at Yester Hill and the way Chris was rolling, she might have saved the party.

Homework: Nate didn't seem to know his plus to hit or what spells he could cast, among other things. I think he should sit down and write out the main things he needs to know on an index card:

Damn do I love CoS as an adventure, I am so disappointed that I won't be running it anytime soon though.

There were plans, but I backpeddled on them with a hunch that the group would be ill suited for the environment I have been planning.
I am glad I did, my hunch turned out to be underestimating how bad one of the players was going to behave.

I have one great player, one good player and two terrible players. One of the terrible players isn't really responsible for it, they are doing their best and I don't hold them accountable.
The other has been aggressively antagonistic and self centered, in game, out of game, to npcs, to players and to player characters.
I am holding back comments and observing as I don't know the people personally, but wow, I have never actually left a 7 hour session that ended in the wee hours actually angry before. Tired and disappointed at worst. Never fully awake and angry.

I suppose it boils down to the concept that as a DM I am there to provide a safe and enjoyable environment for the players, and if a player actively messes with the enjoyment of other players to make themselves happier. Then that grates me more than any other possible result.

-sobs- wish my regular group wasn't full, I would take on the other two players without a second thought.

Oh and hey ;) when's the guide coming out (not demanding, I am in no rush. I just enjoy your guides and like that I can purchase them now)

UE: Ugh.. That's the worst. It's horrible how one person can ruin the whole thing. 7 hours and you were angry, that's no good. I think you need to boot that problem person. It's not easy, but otherwise it will probably kill your game. The last thing you want is to dread showing up.

It took me a long time to learn that there are people in the world who really do not have a conscience and genuinely take pleasure in messing with other people. There are also plenty of people who do have a conscience and still do nasty things if they can justify it using warped logic. I hope it all works out! At least you have another group that seems like it's going well!

The guide to curse of Strahd comes out this Friday! It's gigantic so far. I haven't fully formatted it yet, but right now it is 70 pages long.

Thank you and good luck!

@Sean: I am giving them one more chance this friday coming. But that will have to be it. I have already had one player asking for the person to be kicked the next time they misbehave. And if a player who wasn't directly impacted by the player in question's actions, then it is a sign.

Looking forward to it -laughs-
Can never have enough fonts of inspiration. Talking inspiration, lord has Force Grey inspired me to work on some voice diversity. I have never bothered with voice acting in my games, but I had never seen a GM implement it so well either.

UE: Yeah if another player is asking, that's good. Sound like the group wants him out. The thing about the voice stuff is that... it's really hard. Most of us aren't actors. I can do a bunch of goofy voices, but I don't think I'd try to do "serious" voices like he does. If I bombed at it, I'd have to limp through the rest of the session. I think if you're going to do voices you should practice them on friends and family and wait for them to give you the thumbs up before you use it in a game.