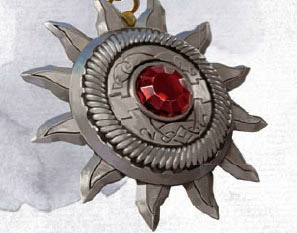 It's been two weeks since the last episode. The consensus online is that the last episode is probably the best of the whole show so far, so definitely check it out if you missed it!

Last Time: Diath stabbed a little girl with the hag pin and killed her, the group set fire to the vistani camp and Murderbot the evil puppet seems intent on revenge. 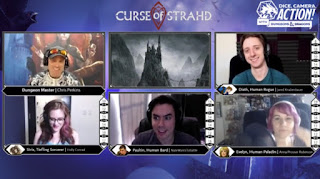 Evelyn had just summoned her undead horse with a lovely magical song. The group had also stolen a horse from the vistani.

They are near Argynvostholt, where the Holy symbol of Ravenkind is supposed to be.

Van Richten says that the ritual to kill Strahd will take 10 minutes and that he will have to swallow an egg. Evelyn asks him if he's ever done that before.

The group is kind of "waffling" here on whether or not to do the ritual. The ritual kills Strahd! Why wouldn't they just do it right away? I assume that they are sure that there's some kind of catch or twist.

There's a bunch of discussion about what to do. Diath accidentally calls Madame Eva "Mommy Eva," which made me laugh.

It seems like Chris really wants the group to cross the river nearby, but the group isn't into it.

The heroes go to Argynvostholt, which is a ruined mansion with the statue of a dragon outside. The right side of the building has crumbled away.

This will be interesting to see how Chris runs this. When I read it, I couldn't figure out the best way to handle it.

Dragon Statue: Diath sees the dragon statue move and gets weirded out. Strix smartly tries to figure out what type of dragon it is. It's a silver dragon. They normally are good guys.

Evelyn tries to talk to it and make friends. Nothing happens.

The group climbs up to a higher floor, barely getting up there. Van Richten sits down and pulls out the Strahd Puppet. Ritual time!

Egg-Swallowing: One member of the group will have to crack open the egg and dump it down Van Richten's throat.

The ritual is done. Van Richten says the group will need to get Strahd to look at it and utter a phrase which they may or may not remember.


Paultin vs. Van Richten: Paultin wants to kill Van Richten now. They had made a deal that once Strahd was dealt with, Paultin could kill him and get revenge.

Diath urges him to stop. Paultin draws his longsword. Diath tells Paultin that he can't let Barovia turn him into a monster. Paultin decides not to do it and punches him in the face.

It looks like the group wasn't going to let Paultin do it. I'm surprised Evelyn didn't intervene. This group really hates Van Richten.

Entities: The group looks for a room to rest in. A few ghostly creatures bows materialize and attack.
Diath throws a dagger at one through glass.. natural 20! This is especially sweet because Diath rolls so low whenever he chucks his dagger at someone.

Anna keeps rolling high and she becomes very amusing yelling stuff like "Get wrecked" as she proceeds to maul these guys. She is awesome every single week.

The group busts through a door and on they see two red-eyed beings looking at them.

Paultin's Waffle Dome: The group needs a rest bad. Paultin points out that he can cast Leomund's tiny hut aka the "vampire pillow fort." Wait.. they call it "The Waffle House." This spell creates an impenetrable dome that the group can rest in. It even has adjustable mood lighting.

Paultin summons the Waffle Dome and the group is dismayed to see that they are about to run out of rations. Diath eats the last of his food and gets sick. He throws up right there in the confines of the waffle hut. The group thinks this might be a result of the vistani curse from Arabelle.

Evelyn casts Lesser Restoration on Diath by mushing his face with her hand. It doesn't seem to do anything.

The group rests. Diath doesn't gain the benefit of a long rest. He does get a short rest and spends his last hit die. Wow, he is in trouble. He right now has at least three different weird conditions going, at my count. 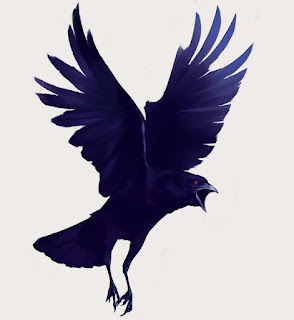 The Exalted Deeds of the Doodly-Doo: The group resumes exploring. Those red-eyed people are gone. The heroes find a room with the icon of ravenkind in it. There are a ton of ravens in here. Strix holds out her arms for one to perch on. 17 ravens flock to her and she is quite thrilled.

Then someone utters this phrase, referring to the icon of ravenkind: "...before you touch the doodly-doo."

Evelyn picks it up and feels a bond with it. She feels like she's held it once before. She remembers the first time she entered a church of Lathander, she met a young priest wearing it and he let her look at it.

It's the end of the session. Anna hilariously works in the title of this episode to close the show. She goes, "Don't worry guys, everything's fine." They should try to do that every week.

Anna says that Evelyn has a shield and she never roleplays it. Chris allows her to say that she uses her bracers as a shield to block attacks, Wonder Woman-style.

ProJared has proclaimed that next month is D&D-sember. ProJared will be doing a bunch of D&D stuff on his channel which sounds pretty fun.

Good show! It wasn't like last week, but it has a lot of stuff worth seeing. This one is more about the amusing antics of the group rather than death-defying feats of derring do. I like these kind of episodes so it worked for me.

Spoiler Alert: If you haven't seen it, Wizards of the Coast actually gave a free preview of the Icon of Ravenkind before Curse of Strahd came out. I'm going to stick it right here so you can take a gander at it and see what it can do.