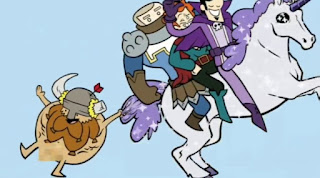 This is a recap and review of the big live D&D game that was held at PAX West 2016 and broadcast live in theatres. This show incorporates ideas from the new D&D adventure, Storm King's Thunder

. I thought about going to a theater, but it was about an hour away and it didn't start until 10 PM. That was a little too much for me.

I love these animated intros so much. You could watch just the intros made for each of these events and catch up on the whole series in a very short amount of time.

We have some big, live introductions. Dungeon Master Chris Perkins seems a little buzzed. The players have entrances and get down to business. 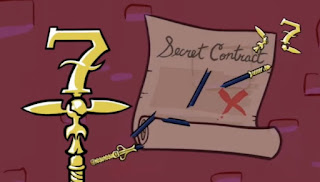 There are a million jokes throughout this show. I didn't include most of them in this, otherwise this would be a mile long. Everyone is very funny and at times the quick wit of Scott Kurtz is astounding.

Last Time: The group were betrayed by Wil Wheaton's old character and Binwin was killed. The group is involved in collecting pieces of the legendary Rod of Seven Parts. This was all chronicled on Acquisitions Incorporated the Series, which I made summaries of. 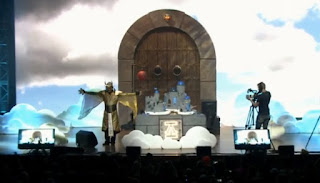 That's a heck of a set, right? On the table is a huge castle scaled for minis. It can be taken apart and everything.

Binwin is dead and frozen. "Weekend at Binwin's." Jim is in a magical glade, combing his unicorn. Viari and Omin are on the airship.

Wow. It turns out that Jim is in Klauthen Vale. This is the home of Klauth, one of the most powerful dragons in the Forgotten Realms. Yikes. Jim convinces them it's safe. The airship flies there. Omin and Viari send Jim off and try to secretly thaw Binwin's corpse out. Viari has a special power - he's a chosen and he can request a favor of his god. But he can't remember the god's name.

He tries to use it anyway. Viari sings a song. The group wants Patrick to actually sing it at the table. He does, and it is incredible. He has a really deep voice and I don't think I can convey the resonance this has in me and the crowd. It's uniquely D&D, where a player gets to share his talents in such a special way.

It works! Binwin is brought back to life! Jim is none the wiser. 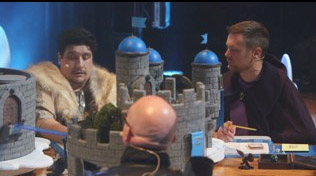 The group doesn't know it, but Klauth is watching them. Flabbergast feels bad for being associated with Dran Enterprises. The group sort of befriends him.

We learn some stuff. The pieces of the rod will be taken to a cloud castle. Dran Enterprises is working for Stratovan, the cloud giant also mentioned in the Force Grey series. In most Rod of Seven Parts campaigns, it is all about finding each piece in a dungeon or lair. Here, it is constantly trading hands among factions. I really like it this way. The traditional quest gets stale if not handled carefully.

The group realizes that Klauth is nearby, watching them. They see that he has wands strapped to his wings. They toss a bunch of treasure in the vale as tribute. It is accepted.

Viari remembers those Zhentarim women he ran into at the dwarf fortress. He wants to scry them. He rolls a 20! He sees them having an "intimate moment"! The group starts fighting over the crystal ball.

Omin throws Jim the orb.. oh no. He fails his dexterity check. The orb falls out of the flying ship. Jim gets on his flying broom and tries to catch it. He passes through a cloud and runs into two silver dragons. Jim knows these dragons. One's name is Vandal. 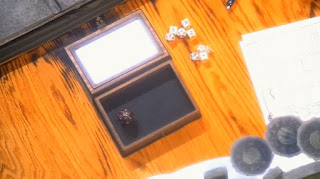 We do some extensive planning. The group is going to attack the cloud giant's castle! Viari is riding a silver dragon. Binwin is riding a beer golem/automaton full of greek fire. Jim is on his flying broom. Omin stays on the airship coordinating the movements. He is really fantastic at making plans and assaults like this.

They drop greek fire on a tower. Viari jumps down onto a frost giant's back.

Binwin rides Tipsy and has him pee ignited greek fire. He rolls bad. The giant Viari is riding is on fire! Viari does a complicated maneuver on a chain, frees a giant slave and recruits his aid (with a natural 20).

Viari ends up on a building far away. He asks the giant to throw him. The giant rolls poorly. Viari is heading for a glass solarium. He grabs the iron rungs. Viari is shot by two arrows. 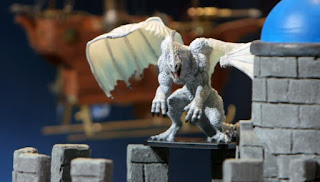 Omin remembers that white dragons are "fucking dumb." Viari pulls an arrow out of his side and throws it at the dragon. He drops out of view. He convinced the dragon that a giant did that.

Jim befriends a griffon. Jim gets on the griffon, Binwin gets on his broom. Jim flies into the huge double doors at the front of the castle. He wants to bash through them, but the doors don't budge and it is quite painful.

Binwin comes over and bashes the doors open with a natural 20! Chris opens up the castle and we get a look inside. 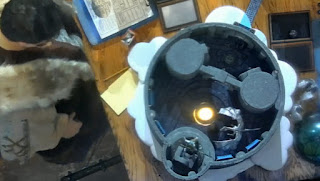 Inside the castle, there's a dragon transfixed by a stone in there and a cloud giant. The giant drops green flame on the group and does piles of damage. The giant has a high-pitched voice, which is unexpected.

Everything in this encounter so far was done with no initiative. Crazy. We finally roll init.

The dragon has runes painted on its scales. Above it, floating in tiny orbs are pieces of the rod. There are 6 of them.

Viari realizes that the stone transfixing the silver dragon is the Nightstone, which was originally located in his hometown. The Nightstone is stolen in chapter one of Storm King's Thunder. When the dragons see it, they are neutralized by it.

Viari runs over to throw his cloak over the stone, but the floor gives way under his feet and he falls. He is going to fall all the way to the ground far below! Jim casts benign transposition so that he switches places with Viari. Jim has his broom of flying, so he is safe and Viari is safe. That was very quick thinking.

Omin casts stone shape to cover up the nightstone. The dragon comes to its senses and attacks the cloud giant. Binwin runs up the back of the dragon and does a pile of damage.

Viari stabs the giant with the apocalypse dagger. The giant's flesh burns away completely. There's a blast of energy from the dagger that washes throughout the whole complex. Everyone succeeds on their Con saves except Viari! Viari's arm is burned off. He takes 48 points of damage. He has 1 hit point left.

Jim is down. The pieces of the rod fall. One is rolling toward the hole. Omin goes to grab it and rolls a 19. This is the rod piece that Jim stuck up his butt. It has healing powers. He heals everyone for 12.

Omin touches the rod to Viari's stump. His arm regenerates.

The group gets away on the airship. That's the end! Check out the standing ovation: 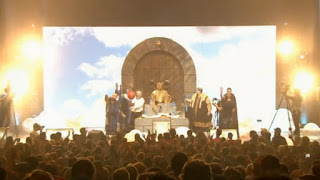 Are we living in a great time or what?

Then there's this weird rap/spoken word thing which I didn't get at all, but who cares. 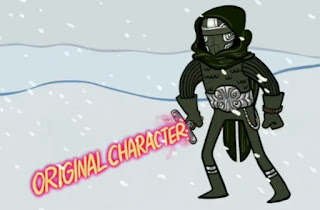 I was thinking that we'd see either Force Grey or Wil Wheaton show up tonight. Or both! So in theory, you'd think I'd be disappointed. But I wasn't because this was really good from start to finish. Most of the time in these longer shows, I get pretty worn out after an hour and a half. But this was funny and entertaining from start to finish. It was really an amazing show and well worth watching. It really showcases how great D&D can be.

Rules: Chris was really, really loose with the rules on this show. That kind of thing doesn't bother me, but I imagine it might bother some people. The group gets all sorts of help throughout the entire battle. I didn't feel that it cheapened things because it kept things moving at a very fast pace and, really, would you want a TPK at this event? Do we want these characters to die? As long as I have the feeling that failure is possible, I won't feel that this was cheapened in any way.

Nentir Vale: I'd like to see the group return to the Nentir Vale, home of 4e, for an adventure. Chris could do whatever he wanted to the place. Everyone loves the Raven Queen, so he could use her and my favorite 4e NPC, Vorkhesis, Master of Fate.

This was a really special show. It's great for people who want to see what D&D is like, and it's great to just reaffirm why D&D is so much fun in the first place. I hope that this era continues for a very long time, and I honestly get the feeling it will.
Posted by Sean at 6:53 PM

Thanks for the write-up. I don't get the open mic thing either, but it's their show. I haven't listened through yet, but in past years the audience grated on me. Looking forward to it though!

VTS: Thank you! There were people shouting stuff from the audience. It got a little annoying but it didn't happen too much. I think If I was sitting in the crowd I'd be annoyed, though.

It started at 10pm local time? Where are you, in eastern Canada?

pbmday: I am in New York. I might have been off by an hour. I actually watched the archived version of this at around 2 AM.

One of my favorite AI shows yet. I kinda like the rap missive at the end! Weird but neat lol. I often wonder what a session would be like in one of Chris Perkins' games he used to run in the WotC office compared to these sessions.

The rap thing.. I didn't know who that other guy was. These sessions feel much more loose. I think the goal for these is just to have cool crap happen and keep things as interesting and exciting as possible. The AI series was much more like a "normal" game.

The spoken verse things are a tradition at PAX games. I was present for the first one: East 2016. Jerry is a poet, so he just slammed a poem on stage at the end of East 2016, and it's snowballed.