Stranger Things Chapter Five: The Flea and the Acrobat 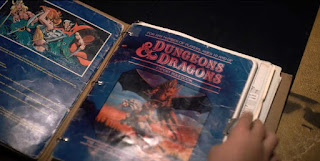 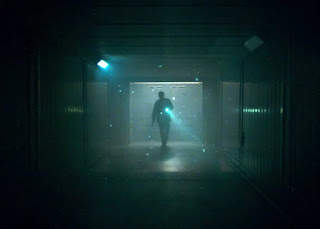 Hopper is breaking into the lab. What the.. security pulls guns on him. He ends up punching them out. This guy is definitely a PC.

Winona is in her house with her ex husband. This guy is trying to tell her he's crazy. This dude... I am not a fan. Now they're getting wasted.

The kids have a theory. Will is in the "upside down" world. They relate it to their campaign - "The Vale of Shadows" heh heh. He's in the Shadowfell! They flip open a binder full of D&D stuff...

Wow. I have my friend's dad's 80's binder and it looks exactly like this! It is full of photocopies of Dragon Magazine articles and homemade rules/charts. The binder on the show has the D&D expert set and I think that is the back of the Isle of Dread, too. 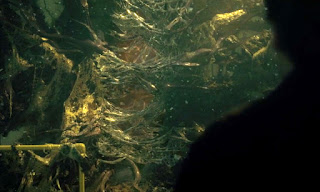 Hopper found the portal. Please don't go in there. Here comes security. They got him. He wakes up in his apartment. He trashes his apartment.. he's looking for a bug. Yep. They bugged his place. Looks like the scientists have bugged the homes of some of the main characters.

Funeral preparation montage. Jon wants to go kill that thing in the woods. He gets a gun. He is also a PC!

The kids ask their teacher how to get to another plane and he does this big explanation. He says if there was a gate to another world, it would warp gravity and the electromagnetic field and maybe destroy everything.

The ex-husband took the Christmas lights down. Somebody punch this guy. Winona realizes he's here for money. She kicks him out. They should have dropped an F-bomb right there. I guess it's not that kind of show.

The kids check their compasses. They see that the electromagnetic field is indeed screwed up.

Oh no. Nancy has a baseball bat and here comes that lame boyfriend guy. He tries to get her to go see a Tom Cruise movie. I hate when this guy tries to be charming. He is rebuffed with extreme prejudice.

I haven't heard the phrase "nuclear family" in forever. It turns out that Nancy is a good shot with a gun. 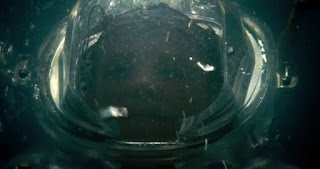 Eleven has a flashback. I think they want her to kill somebody who is really far away with her psychic powers. The group is following the compass... they're going to end up at the lab. Eleven does not want to go there.

Nancy and Jon are in the woods. They get in an argument. Good god, he utterly destroys her. He says that she thinks she's rebelling by doing what every other suburban girl does when they think they're rebelling. Boom! Roasted!

The kids realize that their compass has taken them in a circle. Lucas figures out that Eleven messed with the compasses with her powers. Lucas, who is very intensely vicious on this show, goes off on her. A fight breaks out and Eleven telekinetically sends that kid flying and knocks him out. Good! When he comes to, he storms off. Eleven is gone, too.

More Eleven flashback. The guy she's supposed to kill - It's a Russian dude. Cold War psychic assassination! She has found him. She's in a quasi-psychic realm. Aha! One of the creatures is here. So it sounds like Eleven is the one who accidentally alerted these creatures to the world of humans.

John and Nancy are in the woods and it is dark. They find a deer. Oh no.. the thing sliced it. The deer is still alive. She wants John to put it out of its misery. Something pulls the deer away.

A bit of searching for the deer and the thing.. Nancy finds a weird, moist hole in a tree. She gets ridiculously close to it. SHE GOES INTO THE HOLE! Don't.. ohh no, it's all cobwebby in there. Are you nuts? 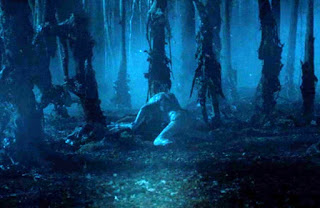 She pops out in the Shadowfell or possibly Barovia. She sees the thing eating the deer. Will her gun work in this world? I wonder if season 2 will deal with a different parallel dimension?

I'm old, so I can't tell when CGI is good or bad, but I think some of you younger people will think this creature looks pretty fake. The thing notices her.

Jon is in our world and he somehow doesn't see the moist hole of the Shadowfell two feet away from him. That's it!

Good show, but too much arguing. I don't like watching people argue in movies and TV shows. They better not try to turn that boyfriend into a good guy. I want to see him get a dish best served cold.

I love the casting on this show. Everyone has a very distinctive, memorable face. A lot of shows feel like they're full of models with geometrically-pleasing faces. On this show, there's a little more room for variety and personality.
Posted by Sean at 12:56 AM

This bit right here is what I've been waiting for. You been says no 'like the shadow fell' in every review so far and you were totally correct! It's the damn shadow fell! You're basically psychic.

That should have said you've been saying it's 'like.... Dunno why it autocorrected after I checked it.

Benji: It is indeed like the Shadowfell! I wish they spelled it "Veil of Shadows" instead of "Vale." The monsters kind of look like a gug from pathfinder. Thanks!

You made some decent points there. I looked on the internet for the issue and found most individuals will go along with with your website.