We just finished up another session of Planescape. We played through another scenario from Tales of the Infinite Staircase by Monte Cook. We've done most of the scenarios. They're good, but they don't have nearly enough detail for my liking.

I used a bunch of soundscape things. In the past I've tried background music during D&D games. Sometimes it works, sometimes it doesn't. It seems like background music works better in long sessions, as people are able to get into a rhythm. In short sessions, by the time they get used to it, the game is over. It can actually be a distraction if you're not careful.

So I used the Syrinscape demo, which has music, atmosphere and a bunch of buttons that make spell noises, sword noises, and other fun little things.

I actually was able to use it with the free soundscapes from Tabletop Audio and Ambient Mixer. It was hilarious and added a lot. The group gave me the thumbs up, so we're going to keep using it.

Last Time: The Iron Shadow, a 'negative reflection' of the Lady of Pain, is wiping out planes and is in the process of "erasing" Limbo. The group got split up. Bidam is in Limbo on a pirate ship looking for this navimas stuff that can defeat the Iron Shadow. Theran is in the Astral Plane fighting an earth genie. Their NPC friend Fall from Grace was "killed." For her, that meant that she appeared in the Abyss near her demon amulet.

So we started with Bidam and his devil servant, Nin. They saw that because Theran was gone, the river he created with mutability was coming apart. Nin used mutability to fix it. He declared that he was now the wizard of the party and that Theran was dead. Bidam didn't know what else to do, so he just sailed on to their destination. 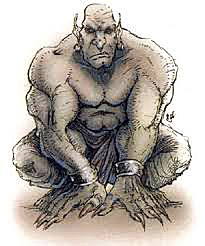 In the Astral Plane, Theran battled Rav the Earth Genie. The earth genie assumed gaseous form, then went solid and hit Theran twice for a total of 40 points! Theran was down.

When preparing this, I realized this was probably going to happen and I was ready.

Theran awoke some time later. Renbuu, the slaad lord stood over him. Way back in the campaign, the group freed a time-traveling slaad for Renbuu. This time traveler warned Renbuu about this situation that would occur in the future. Renbuu needed to heal Theran so that he could make the navimas and save Limbo.

Theran realized that he was naked. Rav the genie had looted him! He took everything - Theran's robe of eyes, his wand of magic missiles, his wand of lightning bolts, his cubic gate.. everything!

Worse, Renbuu had changed Theran's color again. That's what Renbuu does. He made Theran a dusk elf - dark skin and black hair.

Renbuu didn't like Theran, because long ago Theran used a slaad gem to control a slaad slave. This was extremely offensive to Renbuu and Theran tried to defy Renbuu's demand to free the slaad.

So here's what Renbuu did. Theran has this "pocket" in his side, which the group calls his "side vagina." In it is a ball of energy that contains Theran's memories, dreams and personality. Renbuu changed it out for a slaad gem. A golden slaad gem! Over the next few months, Theran is going to turn into a golden slaad.

So Renbuu directed Theran to a color pool that would bring him back to Limbo. Theran left Renbuu and flew toward it (you can fly in the astral plane). He came upon a wrecked githyanki ship and looted some clothes and items off of the dead githyanki. 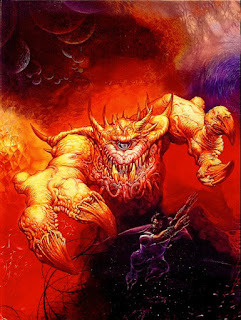 Then he saw what destroyed the ship - an astral dreadnought!

It swallowed Theran! I used the weird 4e concept that when it swallows you, you go into a demiplane. In the plane were other victims - a dead githyanki and.. Seoni, the iconic sorcerer from Pathfinder. 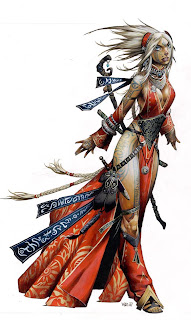 I thought it would be fun to use this NPC and see what happened. She actually has a backstory and it involves weird dreams. Theran is a master of the dream well and he can help her. She was seeking the dream well when she got swallowed.

They escaped through this weird loophole in the demiplane.. you destroy a giant eye. They slipped out of the dreadnought and flew through the color pool.

Meanwhile, in Limbo, Bidam encountered some trouble. Red slaads! 2 of them attacked. Bidam killed one, but not before it clawed him and infected him with a tadpole.

Then 5 more showed up. Bidam's ladies have his special lady of pain slicing power. They cut up the slaad and killed them.

Then Bidam sailed past the giant spawning stone, which is where the slaad are attracted to normally. They met a githzerai NPC who urged them to hurry. The Iron Shadow was wiping the plane of Limbo out slowly but surely. The slaads were attacking the Shadow but could not harm her.

Theran and Seoni ended up popping out right where Bidam was headed. The group was reunited and ready to explore the Temple of Change. Seoni was immediately offended at the fact that Bidam had devil servants. She warned the group not to trust the devils.

Once I read up on Seoni, I learned that she was something of a control freak. I tried to work that in without being too overbearing about it.

There's no apparent entrance to the Temple of Change. It has no windows. It eventually turns from iron to molten metal. The group needed to find the secret entrance while it was iron. They did! 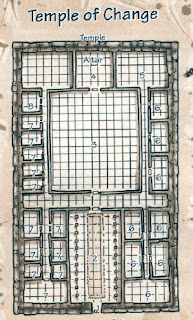 Inside was a railroad-y room where a carpet made of "woven space-time" sucked them into a maze of light and no gravity. With a natural 20 on his skill check, Theran lead the group through the maze.

They came to a room with a hovering gem. The way to escape this maze is very random. You have to touch the gem and think of chaos. That's pretty hard for players to figure out. I assumed I would need to have Seoni drop clues.

But Bidam cast identify! Boom. Strahd zombies were closing in on them, and they used the gem to escape the maze. The maze is the home of Phlegathor the Maze Master, a slaad once linked to the Slaad lords. I love his name.

So the group explored the temple. They went to every storage room, guest room and empty area before finally finding the main hall.

They met Cahm'fel, a githzerai who believed in change. He had changed into a female, three-foot tall woman with blue skin and red hair. Cahm'fel showed the group the altar of change. If you touch it, random things happen.

The group proceeded to go absolutely nuts with this. The results:
That was a bit much for me! I'm going to say that greater restoration can cure these things if the group wants to pay for it.

So after that, the group made the navimas in Cahm'fel's lab. There's a bunch of fun items in here:
With the navimas made, the group was able to do this whole thing where they found the forbidden secret slaads in the pandemonium stone, fed the navimas to the orange slaad and let the slaads feed on him so the navimas spread to them. Then they swarmed the Iron Shadow and she had to flee Limbo, greatly wounded.

Originally I was going to have next session be the one where the group has their "boss battle" with the Iron Shadow. But they really want to go get Theran's stuff back first before the big final battle.

That's fine with me, because I love the idea of running an adventure in The Great Dismal Delve - the home of the earth genies!

Good session! The music and the sounds made it hilarious. The random charts were too random chart-y, but no big deal. Next week should be awesome.

I read the section on The Great Dismal Delve in Secrets of the Lamp by Wolfgang Baur, and while it has a few interesting details it doesn't really give much in the way of actual locations and NPCs. I'll see if I can find more info on this place from other books. I plan on using a lot of Al Qadim concepts. I like the idea of the group sneaking into a harem, so I'll try and work that in. There's a specific type of Al Qadim genie that guards harems, so that should be fun.

The yakfolk are also closely associated with the earth genies, and that works out great because the yakfolk are in Storm King's Thunder