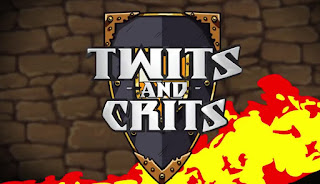 I heard about this show in Dragon Plus issue 9. It is only 20 minutes long, so I figured I'd review it real quick.

It's a product of Funhaus, which has over a million subscribers on youtube. They re apparently associated with Rooster Teeth, makers of Heroes & Halfwits.

This show is being rolled out in an interesting way. If you subscribe to their site for $3.33 a month, you can watch this whole season right now. Otherwise, it will be slowly rolled out on youtube in 20 minute chunks.

I don't know anything about Funhaus, so I looked at their other videos. Some titles include "Lord of the Cock Rings" and "Homo-Shrek-sual." So it's going to be like that.

The show is heavily edited, which I really appreciate. They cut out all of the pauses and rules stuff. They edit out so much that the show feels a little disjointed. I don't mind it too much.

The DM is named Dan. He was sort of the straight man. He just ran the game like a normal person and left the jokes to the players. 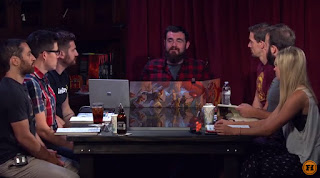 I love these shows that have art of the characters. It helps a lot. Decker is apparently from Shadowrun. He has a cellphone and a 1992 apple laptop book.

The group is in a bar. G-Spot has a really funny voice, he's sort of a greaser. We get some of that patented episode 1 awkwardness which seems to happen on almost every single one of these shows. Maybe it would help if they ran an off camera session first, so they can feel out how the game works and how to portray their characters.

The group is asked to help out. There's been a prison break. The heroes are asked to bring in two orc escapees known as the Moondog brothers. 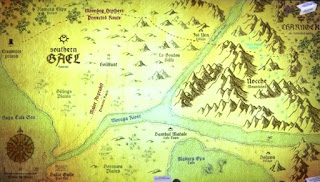 They have a nice map. The group is using a flat screen TV for their map, which I really like. Myriadus is elected party leader. G-Spot doesn't respect authority.

The group travels for a bit through the woods. They are on the trail of the orcs when they run into some wolves. Myriadus tries to intimidate them. He's a new player and he is trying to figure out his bonus. It is really weird that they edit a lot on this show, but they don't edit this out.

The group attacks and misses the wolves many, many times. Shattercock shouts at the wolves. G-Spot hides behind a rock and smokes.

Myriadus prays to his lord and kills the wolf. The DM does that Critical Role thing where the player says how he kills it. I wonder if that will become the norm in D&D thanks to that show.

Myriadus rolls a critical failure. The DM rules that he actually hits another character.

When this show first started, I was put off by the behavior of the players. I don't know how else to put it: I got douche chills. But once they settled in, I saw that the players are pretty likeable and fun to watch. I would say that G-Spot and Shattercock are instantly classic characters.

First Episode Awkwardness: The group doesn't seem to know the ins and outs of behavior at the table. They weren't sure if they were supposed to talk in-character all the time or what. Again, I think they would have benefited from a "practice session" before they did this. By the end of this episode, they seemed to be getting a feel for it.

Too Many Players: Six players is too many, in my opinion. They did a good job of not talking over each other and the heavy editing meant that combat wasn't slow. In fact, I am pretty sure they actually edited out entire turns.

All Star Games: The more of these shows that I watch, the more I like the idea of assembling "all star teams" for short sessions.

For example, Chris Perkins could run White Plume Mountain for Jonah from Force Grey, Gen from MissCliks: Seaborn, Steve from Dungeons & Dragonites and Erin from HarmonQuest. I would love to see that.

It would just be a couple of sessions and that's it. We'd get to watch them play through classic, awesome adventures. I would love... LOVE... to see people play through the Tomb of Horrors. I want to see it run as the meat grinder that it is. I think that would be really great to watch.

Anyway. Twits & Crits is very promising. It's only 20 minutes. If you like a D&D show that is heavy on jokes but still D&D at its core, you should check this out.
Posted by Sean at 7:49 AM