I am a big fan of D&D art, so it may not surprise you that I finally bought Realms: The Roleplaying Art of Tony DiTerlizzi

Tony DiTerlizzi is the guy who did the bulk of the art for the Planescape setting back in the '90's. He's one of my favorite artists and I really get a kick out of making NPCs out of the people he draws.

I'm going to post a few of my favorite pieces and ramble about the stuff written in the book.

I think we should start with one of my favorites: 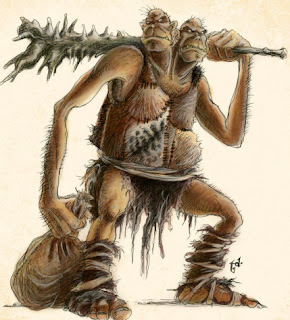 An ettin! This was never published. I love ettins. Once you do the "two heads don't like each other" gimmick a few times, it's hard to figure out other interesting things to do with them. Still, they're one of my favorite monsters.

We learn how Tony got his start. It's always weird when you hear about artists getting rejected. I remember reading that Todd McFarlane got rejected over 200 times before he got his first paid gig.

Tony sent material to TSR and they rejected his stuff. In the letter, they did say he should submit more stuff in the future. Tony decided to call them and learn what they were looking for. He sent more stuff, which was also rejected. He called again. The third submission led to a gig. 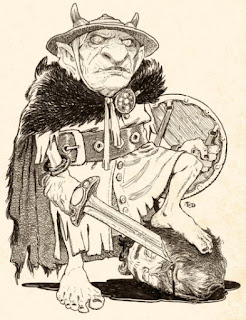 It really goes to show you that you should not give up. Even the most insanely talented people are rejected. I don't know why. The samples he sent are in this book. They are awesome!

Some of you younger people might be boggled by this. Back then, you didn't send art over the internet. You mailed it! Tony says that he actually sent his sketchbook to TSR as an art sample. 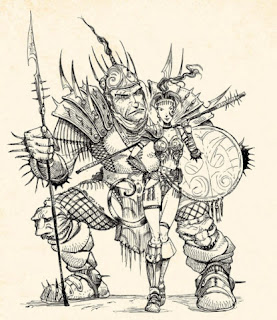 This is an unpublished piece of Planescape art. This book has a nice Planescape section, but it is not big enough for my liking. I'll work these two NPCs into my game. This piece is called "A Basher and a Cutter," so I'll try and squeak that in, too. My players love Planescape slang. 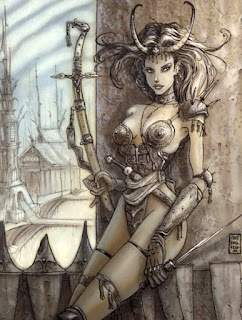 Tony mentioned in the intro that he touched up some of the art in here. This one in particular looks like it got a bit of a makeover. He talks quite a bit about tieflings in this book. TSR felt that his art had made tieflings extremely popular, and they actually told him that he had to do the art for the tiefling in the 3e monster manual.

Tony also mentions that he drew the tieflings "vampy" because he felt that they were the offspring of succubi or incubi. 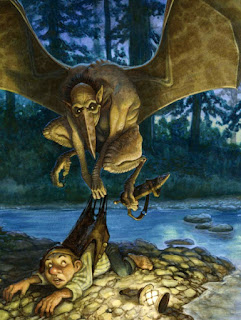 I don't remember ever seeing this before. It's the cover of Dungeon Magazine #89. That's a harpy! That thing is really freaky. 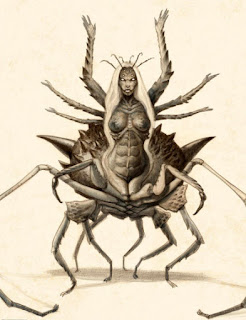 I also never knew that Tony DiTerlizzi drew Lolth. This is from the 3e Deities and Demigods book. I really like the sort of carapace she has and the plating. 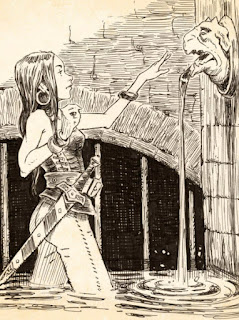 Tony mentions that when he gets ready to work, he does warm-up drawings of... D&D stuff. He says he has drawers full of these. Seriously, we need a 5e Planescape adventure full of DiTerlizzi art. Am I right? Not doing so is a crime against humanity. 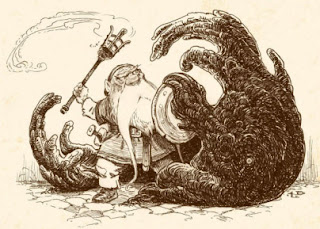 This one is from a bunch of unpublished D&D drawings he did in 2014. He posted many of them on twitter, including a few that aren't in this book. I love his dwarves and how they're old and whiskery. 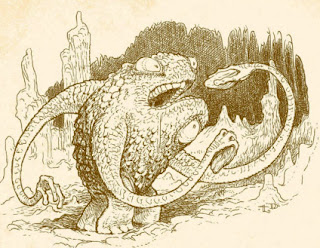 I have never really liked the xorn. But this drawing is so hilariously awesome that I am going to try to work this thing into my campaign as soon as possible.

OK! There you go. It's a great book, you should check it out.

I did another chapter of my Guide to Storm King's Thunder. I am trying to get this thing done, but there's so much information packed into each page! It is quite time-consuming to pull it apart. Deadstone Cleft (the stone giant dungeon) has a lot of cool ideas in it. It's probably worth lifting out and putting in your home campaign.
Posted by Sean at 1:06 PM

I sprung for the hardcover version last year and I love it. The paper and ink are high quality, and I've shown some illustrations to my players to give them visual representation of what their characters were seeing ("This here's a Mercy Killer...").

Totally agree with you that Wizards should publish a new Planescape book with Tony DiTerlizzi's art. I'd likely buy it in a heartbeat.

I love this stuff. Last year I got to take a drawing class with Tony at Gen Con and it was such a joy. He handed out a few big colour composites to each of us that were worth the badge price on their own, and he was awesome and very funny. I highly recommend it if you get the opportunity!

Matt: 5e planescape.. would be so awesome. I can't imagine what the adventure would be about but man I'd love to see it.

FifthColumn: Wow, that is awesome! I would definitely sign up for that if I ever went to Gen Con.