Adventures in Eberron - The Mark of Prophecy 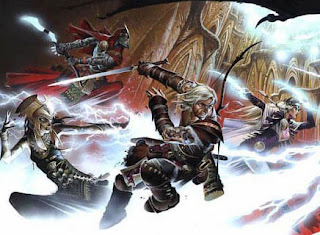 I played in my friend's Eberron game yesterday. I am running an 8th level sorcerer who talks like Sean Connery (badly).

We had finally assembled the deck of many things. The DM was expecting us to draw from it, but nobody wanted to! I had originally planned on drawing 3 cards, but once my character died and was raised, I got scared. I am much more cautious now.

Then, that beanstalk we made a few sessions collapsed. We had forgot - the flying island above it was losing its magic. The island fell on the graveyard. It was sort of a disaster.

We did have a mission with these cards. We had to put each card in the hand of a different statue i this weird underground place. 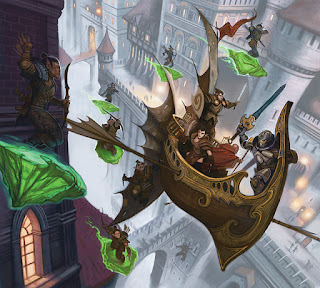 First, we wanted to get some healing potions. We went to House Jarasco - they're the clan that specializes in healing. It turned out that healing potions had been made illegal.

Because of the collapsing island, the ruler of Sharn decided that adventurers in the city needed to be dealt with. So the thinking is that without healing, adventurers will either quit or die off.

The ruler of Sharn right now is this princess who we are very suspicious of. She is apparently linked to an entity known as the Lady of Plagues.

We immediately started planning a black market potion-selling scheme through the bar we will be opening soon. I love the idea of us going to other cities and stealing healing potions, then coming back to Sharn and selling them,

We hit the library and did some research. We know there are some rakshasas involved in this whole story somehow. In real life, I know that's bad. They are immune to spells level 6 and lower! But I don't know if my character knows that or not.

In my games, I let players use any knowledge they have. To me, it's a benefit you earn by playing the game a lot. We can always make up a reason why your character knows it.

We eventually learned all about rakshasas, 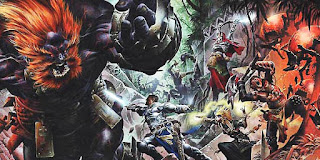 Then we went down below and placed the cards. Glowing images appeared in the room. They showed spiders crawling over all of Eberron, and a mark of prophecy. Marks of Prophecy are some kind of Eberron thing that I know nothing about.

I think they have to do with the draconic prophecy, which is an Eberron thing I know nothing about. It might have something to do with the dragonmarks, which are marks that some people are born with that gives them special powers.

We also saw a vision of these three stones banishing a warforged to some other realm. Three people were holding the stones - our characters from the previous 4e campaign.

Eventually, we learned that each of those stones were located in planes we could access in my well of worlds. Once you have all three stones, you can access a new plane.

While we gawked at the glowing images, a portal opened up and this giant spider came out. It really messed us up with acid webs, but we eventually defeated it.

I was kind of expecting some sort of massive explosion now that we have assembled the deck, but from what I can tell we are now going to be trying to stop some evil scheme involving Lolth and Orcus. 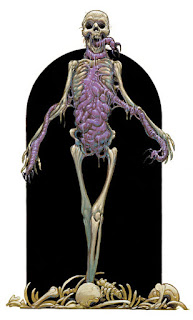 We did a bunch of stuff back up in Sharn as we tried to figure out all of the clues in the vision we had down below. This all lead us to the apartments of two people who were are pretty sure are the rakshasas. We needed to break in to their apartments.

We are the worst at breaking in. One locked door completely shuts us down. That said, we did pretty well this time. Two of us crept in, invisible. I used dimension door to get us into an apartment. We lowered a rope out of the window down to the fighter and he climbed up.

A thorough exploration turned up almost nothing, except for a cauldron that apparently was a one-way portal. We eventually jumped in and we appeared in a dungeon.

As we explored, we saw a magic elevator that was powered by a couple of items. We needed that elevator to go up. Without it, we were stuck down here. It took a lot of trial and error to figure it out.

We thoroughly searched this whole level. We got attacked by a phase spider and killed it. We found an altar to Orcus guarded by a monster I'd never seen before - a Mohrg.

We also fought some intestine-snakes with fangs. They paralyzed me and man I could not make my save.

Eventually we found the two items we needed:
I was able to use mage hand to extract the eye from the cube.

We used the items and activated the elevator. That's where we stopped!

It was a good session. They're all good! We players all work together and there's no dysfunction in the group dynamic.

Metagaming: The thing I've been thinking a lot about in this campaign is metagaming. In the beginning of this campaign, I never worried about anything because I assumed the DM would scale everything to our level. The other players don't think like that. They assess every situation and if it sounds too dangerous, they don't want to do it.

Now I try to think like that, too. I'm getting better at it. I defer to them as often as possible. It's sort of like they are teaching me how to be a player.

In addition to this campaign, the DM runs a weekly 4th edition game. I love hearing about other people's campaigns, so I've heard a lot about it. When he tells me stories, all that 4e stuff comes back to me. I loved 4e, but wow, I do not want to play it again.
Posted by Sean at 2:46 PM