Node - Call of the Wild Episode 1 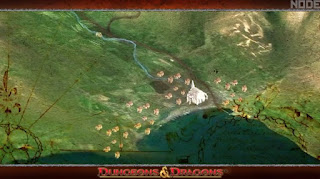 From what I can tell, Node does a lot of video game streams. In this video, they sit down to play a home-brewed campaign.

It's weird. There's no set. They're just playing in someone's house. But the video is professionally produced complete with quick cuts, graphics and background music.

Reading the comments is very interesting. It seems like a lot of younger people watched this and became interested in D&D. That's a nice thing about this new era. People can actually see what the game is like, and once people see it, they "get" it.

The DM is Sam. A lot of commenters say he reminds them of Dane Cook.

The heroes are members of a nomadic tribe scouring the wilderness to survive.

The Town Elder says that he senses elk and the group needs to go hunt one. A caravan shows up at the camp. They come bearing gifts: scale mail, metal-tipped arrows, and grains.

The group spots an elk. Nohki sneaks up and kills it with a single shot.

A bear is here. The group makes very quick work of the bear.

Bran starts to feel ill. He has mini-pox. He loses a point of Constitution. It looks like that caravan guy has brought disease to the tribe.

They rush back to the camp. Oh geez, they're all going to be sick..

At the camp are soldiers. Some of their family members are missing. Others are dead.

The heroes rush in.. and start rolling natural ones. Poor Bran falls in the campfire.

One guard goes into a tent. They hear screaming - it's Nohki's wife. The guard tries to stab her, but he rolls a one.

Another guard tries to flee. Nohki shoots him for 18 points and kills him.

The bad guys are dead. Myra's alive. The children were taken as slaves. They check on the village elder. Both of his legs are broken and bent the wrong way. 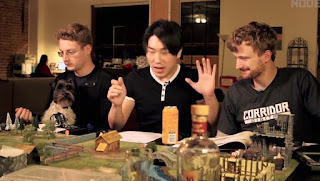 There is a little dog politely watching the group play. This dog is intensely interested in everything that is going on. It is very amusing to watch.

The elder gives Bran a scroll of lesser restoration to cure him of the the minipox. He gives them a medallion that can cast divination once per day. They ask the amulet where Bran's family is. They're separated - one is near, and one is far away.

A bird flies over and regurgitates food into the elder's mouth. The elder tries to move and is dying. The group decides to let him die. Wow.. Nohki decides to put him out of his misery. The elder dies before Darien can stab him.

The group searches the guards. They find orders. A cleric named Orville of Quintonshire ordered them to wipe out the tribe to make room for more farms.

I like the plotting and I like the idea of having the group play members of a tribe. This was very simple but effective. This is a "real" game of D&D where the focus is on the game and not on jokes. They edited out all the pauses and the rules talk so that we get a nice, quick run through the session that flows really nicely.

All of the players are very likeable and definitely people you'd probably want to play D&D with. The DM has a lot of enthusiasm and is more than ready to run the game.

This show seems like it is especially good for people who haven't played D&D and want to see what it is like. It definitely looks like they enticed a small horde of people to try D&D.

I think "actual play" videos like these have helped 5th edition become a huge success. People from all of these different corners of the internet are convincing thousands of people that the game is worth playing.
Posted by Sean at 1:50 AM

They also re-created this episode in Minecraft and you can find it on YouTube. I think that also helped them bring in a lot of younger viewers. It was very well done. Search D&D Call of the Wild Animated Series.

I thought you might like this! I do like the production quality making it flow well. You'll see he has quite the set for miniatures once they hit town! I rather like what they've got going on here versus the celebrity panels where the goal is more entertainment for an audience. Both types of productions add exposure to the hobby, so I like them all, but I can definitely sit through this series more than others.

Michael English: That sounds cool, I will look for it. Thank you!

Jason Raabis: This one has a nice structure to it. I don't like the shows that have random fights with animals. It feels like a waste of time. On this one, everything mattered.

You got the players the wrong way round - their character names match their real names. D plays Darien and Niko plays Nohki.

Anonymous: Shoot. OK, I'll fix it. Thanks for the alert!