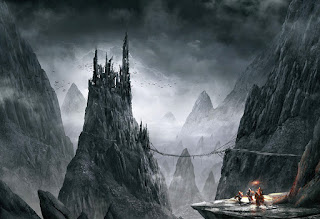 Last Time: The group is in the Amber Temple. Strix was killed by some vampire spawns. Chris confirmed on twitter that the spawns cannot turn her into a vampire. 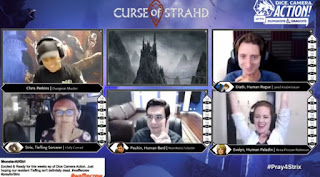 Paultin went through a portal to the Amber Temple. He's down below where the vestiges are. He casts invisibility just as two creatures (vampire spawn?) clamber down the wall to get him.

Meanwhile, dead Strix is in mist. In the fog, she sees dark grey forms. She meets a little kid named Jesper who died of an illness. She thinks that the longer they stay here, the less real they will become.

They run into the crazy kid who tried to kill the group a while back. He has no feet. He is weird and creepy.

Diath is holding the corpse of Strix. Evelyn and Barmy the lich are nearby. Barmy tells the heroes that one of the vestiges can bring her back. Hee hee.

Paultin actually gets dropped by the vampire spawns. Oh boy. Wait, Diath and Evelyn hear the noise. Evelyn charges in. Paultin is invisible still, so they don't know he's there. Does invisibility go away when someone drops to 0? I think it is a concentration spell and since he's unconscious, he can't concentrate.

Evelyn trips over Paultin and lays on hands for 5 units of well-being (!). The group isn't sure if it's really Paultin or another simulacrum.

Paultin becomes visible. They hear someone below yelling "Back in the name of the Morninglord!" I think it is Van Richten. Chris is doing an Anthony Hopkins type voice very well. It's fitting, as Hopkins played Van Helsing in Bram Stoker's Dracula.


Wow. Diath tells the vestige it can do what it will with him as long as Strix is brought back to life. Zurdun the Corpse Star (Curse of Strahd page 196) offers him the power to raise the dead.

Diath becomes an emaciated, ghoul-like thing. Blinding white light fills his eyes. He's been invested with ancient power. He can use the power once and then it is gone forever.

From page 196: "The beneficiary of this dark gift takes on a corpselike appearance and is easily mistaken for undead."

Resurrection is on PH page 272. It looks like Strix will have a -4 to all rolls. It will improve by 1 with each long rest. It looks like Chris decided not to use that, which is good. Those penalties are a real bummer.

Van Richten talks with Evelyn. He reveals that he was disguised as Rictavio, the guy who interpreted Madame Eva's reading in Vallaki way back when. Evelyn asks about Dee and it sounds like we'll see her again soon. Good! Erika Ishii was my favorite.

Van Richten.. ohhhh poor Diath. Van Richten has a scroll of raise dead. Ohhh wow, that is really funny. Jared is hitting himself in the head with a book.

Van Richten uses the scroll of raise dead on Strix. Jared wanted to use his power but Chris kind of scrambled to have Van Richten take care of it. It seems like Chris wants Diath to have that spell in his pocket for future use.

The group goes up to the entrance. It was blocked by rubble, but something burrowed a tunnel. It was Van Richten! Apparently he had a creature imprisoned and let it free.I think he had a tiger in his wagon. What creature was this? A bulette? An umber hulk?

Hey, I just remembered. Van Richten killed Paultin's parents. I wonder if Paultin is going to do something to him.

Van Richten tells Strix she has the key to defeat Strahd. Is he referring to the Tome of Strahd? 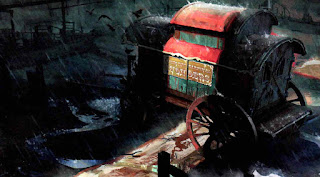 The group piles into Rictavio's Wagon. He drives like a maniac. They go through Tsolenka Pass. Uh oh... here comes that winged creature that Strix heard but didn't see! It's a roc!

It scoops up the whole wagon. Awesome. Strix uses hellish rebuke to damage it. The roc drops the wagon right on the edge of the bridge and the wagon doors open. Oh no, Strix fails her save! She falls out and plummets into the chasm. She thinks she can assume gaseous form to save herself. She does.

Van Richten is prone on the ground near Paultin. Welp. Paultin has an opportunity to take a shot at the guy right here. He doesn't. A reader pointed out that Chris later said on twitter that they ran out of time. Apparently Paultin had something up his sleeve.

The carriage is teetering. The horse is tethered to it. Diath tries does a sweet maneuver to get out of the wagon. The roc is flying away. That's the end.

Very good episode! I like how pretty much every session is eventful. None of them feel like "filler."

Jared is Good: I think that Diath is becoming a great character. He did whatever he had to do to help his friend. Jared was being very unselfish, which to me is the hallmark of a great player. I didn't realize how much Jared contributed to the game until I made that episode guide. When I dug around for my favorite moments of the show, I realized pretty much all of them were because of Jared.

The next show isn't until October 1st, and that will be the live Twitch Con show. Erika Ishii will be there. I have absolutely no idea what will happen. I guess they are going to go through chapter 11, which is one of my favorite areas in the whole adventure. It is very D&D. I think it is going to be epic.
Posted by Sean at 8:35 PM

Slight typo-- you said Van Richten was standing near Van Richten. Also, on Twitter Chris confirmed that Nate did remember that tidbit about Van Richten killing his family-- he just ran out of time to act on it. I think the reason he volunteered to ride up front with the guy was to bring it up; the roc just interrupted things.

On another note, I'm very interested in how Jared uses his gift. One important detail is that the creature can have been dead for any amount of time. What if he resurrected Tatyana?

Anonymous: Thank you! I fixed it. You just blew my mind. He could bring Ireena back! That would be crazy. Thanks!

it was pretty much a boring episode. however, that moment after diath takes the dark power and finds out he needs a really expensive material component and then van richten says he has a raise dead scroll... O M G! i wish i could 'manipulate' my players into something like that (without the players wanting to kill me afterwards too)

david: I get the feeling Chris has something specific in mind that he wants Chris to do with that resurrection power. That was one of my favorite moments in the whole show so far.