Today I'm going to check out a DMs Guild product by Jason Bradley Thompson, who does the walkthrough maps that I like so much. He made a new class for 5e - the Priestess. The class is not restricted to one gender, which I'll talk more about below.

You can buy this right here.

Disclosure: I was given a review copy of this product.

I am not a big numbers guy or a character-making guy. As a DM, I am primarily interested in cool ideas. So I was a little apprehensive about checking this out, but I flipped through it and saw that it is overloaded with great ideas.

Quality: This pdf is 22 pages long and extremely professional-looking. The layout is fantastic, the art is great and the material inside is very well thought out. They took the time to consider all possibilities with the concept and then hammered out the details.

I can tell you right off the bat that I'd make a Priestess character in a heartbeat. 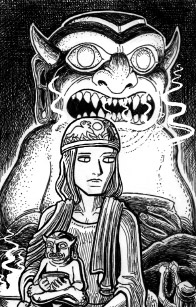 A priestess is connected to an "idol," a statue related to their deity. This book won me over completely just by showing that your character's idol can be the demon statue from the 1e AD&D PH cover. How awesome would that be? You could buy this mini and live life on the razor's edge.

A Priestess is proficient with no armor at all. Yikes.

Idol Progression: The priestess starts out with a tiny idol. As they gain levels, they need to get idols that are bigger in size. By 13th level, they need an idol that is Large.

If the idol of a priestess is lost or destroyed, they can't regain spells until they get another one! They have a special spell called "Repair Idol" which can solve this dilemma. 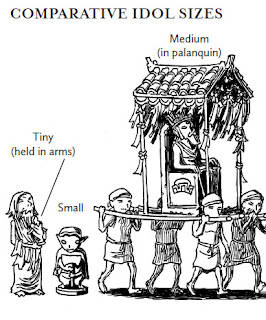 Your idol can grant you boons, which you can save ("boon points," basically). Those boons can be spent to get special benefits. There is a limit to how many boons you can hold onto that increases as you level. Spending one boon might give you temporary hit points, while spending seven might let you fuse your consciousness with the idol and go on a rampage. You can still cast spells in this form! How awesome is that?

Gaining boons depends on which type of idol you have. Here are some of them:

Bloodthirsty Aspect: You gain boons when you kill creatures within 5 feet of the idol. There are specific counts for how many creatures must die for you to gain a boon and everything.

Resplendent Aspect: You must offer money to the idol or buy food for other followers of your god. I love this idea. You could do a lot of fun in-game things during a big feast like that.

Mortifying Aspect: Egad. You can hurt yourself as a bonus action to automatically hit your opponent! If you subsequently gain any kind of healing during that battle, the idol is displeased. There is a big section on how to redeem yourself in the eyes of your idol.

As you gain levels, you gain special powers. My favorites:
Every few levels, you get to pick a power for your idol. There's a million of them! My favorites:
New Spells: There are about 8 new spells in here, many of which deal with the idol. You can make it come to life and attack for a moment, which will be really epic once you hit 9th level and your idol is Huge. My favorite spells:
Observations

I think this is a really great class. It is very well conceived and presented. I don't really have any criticisms, but a few things stuck out to me.

"Priestess": There are some players who don't like playing characters of one gender or the other. I had a number of players in the past who wouldn't play a female character. I had others who only played females. I think that when people who don't want to play female characters see the name of this product, they might just pass it by.

Sacrifices: The Bloodthirsty Aspect is awesome, but to regain spells during a long rest you need to sacrifice a number of creatures. Quite a few creatures! It suggests that livestock could be used as sacrifices. It seems like the whole idea of ritualistic sacrifices might cause problems with some parties. I could see quite a few of my players not wanting to team up with someone who makes sacrifices to their god all of the time.

Cheeseballs: The Mortifying Aspect Priestess regains spells by maintaining a state of ritual purity. There is a list of 10 restrictions which you must pick three of. Your character has to stick to those restrictions forever.

Some of the restrictions are really great: Don't drink, don't have sex, don't speak except to pray. But I can see some cheesy players taking these three:
It's tricky to figure out restrictions that have a tangible effect on the character without hampering them too much. I think you need the right type of player for this aspect.

This thing is just three bucks and it is of professional caliber. It was meticulously crafted and very well done. I can imagine this adding a lot of fun moments to your campaign. If the Priestess sounds at all interesting to you, you should definitely check it out.
Posted by Sean at 9:59 PM