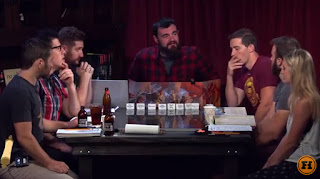 I feel like watching more of the adventures of G-Spot and Shattercock. Clocking in at just 20 minutes, these episodes are easy to watch and write about. 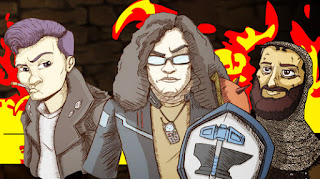 The group is still on the trail of the orc brothers who broke out of prison. The group comes upon a farm and they are going to stay there for the night.

The farm is owned by a big hairy guy. He offers the group a drink called "pokse" (?). The group thinks he is trying to slip them a roofie. Shattercock says that she will have a drink. The group groans.

The heroes go to sleep in the barn. Shattercock casts a spell to appear as one of the farmer's kids and she creeps around in the farmer's house. She looks for stuff to steal.

The next morning, the farmer convinces the group to go hunt some wolves for him. The heroes reluctantly agree. The farmer and some of the kids come with them.

It isn't long before they find some wolves. One is old and the other two are young. 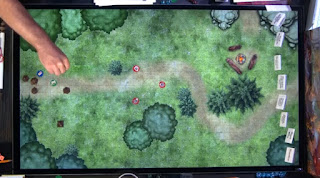 G-Spot creeps up, lights a cigarette, says "Hey!" and fires an arrow that kills a wolf in one shot.

Shattercock uses mage hand to borrow and smoke G-Spot's cigarette, which blows G-Spot's mind. These two crack me up.

The Shadowrun guy destroys the wolves with a fireball.

There's a campfire nearby and an elf tied up in a tree. Someone cut his tongue off.

Suddenly, goblins jump out and ambush the group. That's where we stop.

I didn't like the idea of fighting more wolves, but it turns out that it was just a set-up for the ambush. I still think the group is too big. They should cut two people.

I think Shattercock and G-Spot are hilarious, so I'd watch this show any time.
Posted by Sean at 2:35 AM