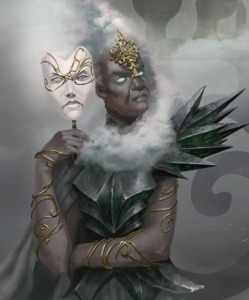 I finished the Guide to Storm King's Thunder. I need to go back over it and polish it up, but it's pretty much done. It should be a handy tool to use if you decide to run that adventure.

Cloud Giant's Bargain is a special adventure linked to Storm King's Thunder. It was given to people who went to a theater to watch the Acquisitions Inc. PAX West 2016 game. The show was really great. If you haven't seen it and you have the time, you should check it out. I didn't go to a theater. I was able to buy this on ebay.

Movie Theatres and Freebies: There has been a lot of talk online about movie theaters that didn't give out the adventure. I was a theater manager for many years. I can tell you with certainty that, yes, the theater management kept them and sold them on ebay. Don't blame the ticket tearers for this. It is the people at the very top who are making tons of extra money on the side with this kind of thing.

As further evidence, I should note that my module came shipped in protective cardboard cut from.. an Icee box. We were up to our necks in Icee boxes at the theater.

Availability: Right now there are a ton of these on ebay. You can get one for ten bucks at this very moment if you want one. I would imagine that wizards will put the .pdf of this on the DMs Guild site in a few months. 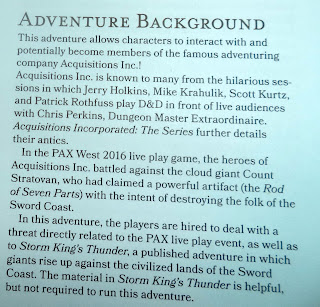 Quality: This book is in color and it has a nice shiny cover. Almost half of the book has monster stats, magic item stats (!) and maps. The maps are hand-drawn just like in other encounters adventures.

Newb-Friendly: This seems to be aimed at people who want to try D&D. It has tons of DM tips for new DMs. It's for characters 5th - 7th level, which seems tricky to me for new players and DMs to start with. I think this could have used some pregens printed in the book.

Luxurious: One thing that I love about this adventure is that it has lots of boxed text. I always like boxed text as long as each one is kept short. Storm King's Thunder has almost no boxed text at all. Things are so packed in that book that it feels almost claustrophobic to read it. This adventure has room to breathe.

Interns: We begin in Neverwinter. The heroes are hired on as interns of Acquisitions Inc. Acquisitions Inc is going to attack the cloud giant Stratovan, who has almost all of the pieces of the rod of seven parts. This situation was resolved in the PAX West game.

The group each gets a fun little memo/handout.: 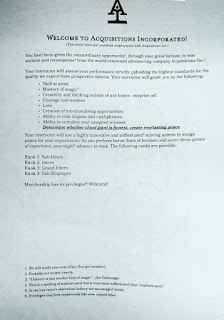 If the players are familiar with Acquisitions, Inc, I think it might be cool to say each member of the group gets a signed Jim Darkmagic photo, too.

Travel Options: To get there, the adventurers can either use griffons (if so, they land on C1, page 8) or do a HALFF - a high altitude feather fall drop (see page 10), which sounds awesome.

The HALFF drop is really great. The group has to jump out of the airship, hold hands, and break an object with a rune on it to activate the feather fall spell. As they fall, they can try to make Dex checks to angle into a dark cloud to conceal their approach. Otherwise, they might be spotted by a chimera or giant eagles. That is just awesome.

In the adventure, they say to have whoever is breaking the rune make an arcana check. Then it says that the DM should widen their eyes in horror and pretend something bad is about to happen and then reveal it's a joke.

I think that's a fun idea if you're running for new players. If not, I think you should come with some kind of slight negative consequence for a low roll. Not death, but maybe a weird wild surge or something. Maybe Jim Darkmagic made this thing and gave it some weird quirk.

NPC Ally: The group is given a talking skull named Tulahk, who is a fun NPC that can be used as a sort of mouthpiece for the DM. He's a lot like Morte from Planescape: Torment.

The castle has four sections to it. There's three structures connected by walkways. There's an island at the intersection of all the walkways:
You might want to put some giant doors in this place like the ones on page 189 of Storm King. 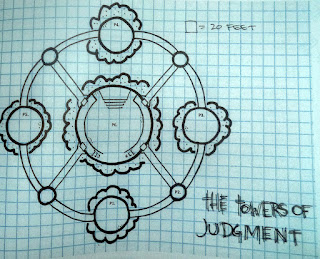 The group can creep around in this place and learn about Olthanas. The group can learn that Olthanas might have a pet white dragon! They can find some magic items and clues that the majordomo of Olthanas seems to be committed to villainy.

More creeping around, a few random monsters. There is a really cool idea in room 6 where the heroes have to use a mirror to get to the second floor. There's a very amusing spa encounter with a cloud giant grandfather. The group can get the impression that the majordomo is up to something at this very moment.

The group might fight a dragon here, and they meet with Olthanas and Majordomo Balakar. That meeting is very cool. There's a really great idea where someone is wearing a trapped choker. Awesome.

Reward: The group can gain ranks in the Intern "faction," which is really fun. If they hit the highest rank, they get to meet the members of the Acquisitions, Inc. group. Maybe that meant that this was run at PAX and that these players got to meet the cast. I wonder if their characters were on the airship when it fired on the cloud castle during the PAX West adventure.

Good Stuff: This scenario seems like it works best if you're not committed to having the group go through every area. In Adventurers League play, you are expected to fill four hours so you kind of need to have the group explore. If you run this as a home game you can just let whatever happens happen.

Breezy: The really nice thing about this is that it reads so smooth. You can absorb this whole scenario in a very short period of time, so your preparation time won't be too bad at all.

Convenient: Another thing that really helps your prep time is the fact that all of the monster stats are in this book! It's very handy.

Modules: I have no problem with the 5e strategy of putting out one adventure every 6 months. It's basically like we get two adventure paths a year, which is great. That said, I really love that this is a "module." It's a little booklet with everything you need. I missed it and I'm glad they made this.
Posted by Sean at 2:08 PM

Thanks for the writeup. It's a shame that Wizards stopped producing 30-something page modules. Even reading a review of something like this is a real pleasure. I hope they do more soon, not just special event type stuff.

Great review, and I am in total agreement with Anon. Its a long shot, but I hope that they bring back something similar to the ol' "DM Rewards" program, and make something in this format the reward-- run all of a HC or all the DDAL modules in a season, get one of these in the mail. A person can dream...

Anonymous: I agree, I love modules. It's much less daunting to sit down with this than with a gigantic book.

Brett: I loved the 4e DM rewards program! It was fantastic.

I just want to post up here to mention that Wizard's still does make 30-something page modules. However, most of the were marketed for Adventurer's League and until early 2016 were only available through gaming stores if you ran AL for them.

In early 2016, they opened their catalog on the DM's Guild and they now have over 4 season's worth of material available in PDF for $3 or $4 / shot. The first few seasons are actually available in season packs for about $2 each. They have even added convention-only material and some of the early D&D Next material from the playtest era.

There is an intense amount of short material available from Wizards. On top of that DM's Guild features all kinds of things from Kobold Press and other professional caliber publishers. Frankly, the short module is the primary currency of published adventures.