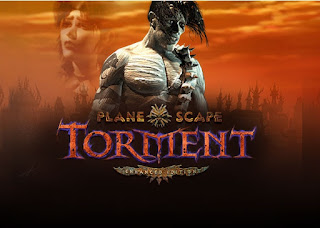 A few months ago, Planescape: Torment Enhanced Edition was released. It's a cleaned-up version of the original RPG, which some regard as a classic.

Holly, who plays Strix on Dice, Camera, Action, did a series of videos on this game right here.

I'm going to write a review and discuss my experiences with this game. Then I'll talk about how it relates to the tabletop RPG setting.

You Must Like to Read: If you want to know whether this is the game for you, it's pretty simple. Do you like reading? If you do, you'll like this. This game is 90% reading and choosing responses. There is combat, too, but you have to be willing to read through text scrolls to get to them.

Reception: I first played Torment back when it came out way back when. Torment was critically acclaimed but didn't sell particularly well. I have always felt that the thing that hurt this game the most is the cover. Look: 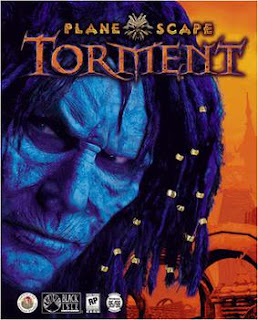 I think when you see that image, you get no idea of what the game is about and it really doesn't look appealing at all. The colors... gah. It's "different", but different doesn't mean good.

I've never liked the look of the main character. He looks like a gray-skinned caveman with dreadlocks. It just feels completely out of place with the Planescape setting.

Rules: The game uses a modified version of the AD&D 2e rules, complete with descending ACs (an AC 2 is good in 2e). Spells are modified, but most keep to the spirit of the originals.

Premise: You start off waking up on a slab in the Mortuary, home of the Dustmen. You have no idea who you are or why you came back to life. There are tattoos on your body that provide clues. This game came out before Memento, and at the time was a pretty innovative idea.

From there, you wander and slowly piece things together, making allies who can join your group in the process.

Good and Evil: Your alignment changes according to your actions. If you do evil things, you become evil. If you do good things, you'll become good. I always like being a good guy in games, and I found it incredibly difficult to attain lawful good status. The closest I came was neutral good.

Classes: You start off as a fighter. Eventually, you get to choose a class to build on top of that. In my newest playthrough, I decided to be a mage. It takes an extremely long time before you get to make that choice. I think I was 15 hours in before I actually became a mage.


The best thing about this game are the characters. They're extremely original and many are quite complex. Almost every single person who can join your party is a really unique, interesting character. The city is overloaded with fun NPCs, from a blue-skinned magic item merchant to a guy who legit lost his head.

Quests: The game is full of mini-quests, many of which are optional. Some of them are pretty hard to figure out. If you're like me, you'll need to consult an online FAQ or you might get stuck.

Secrets: There are secrets everywhere. Items stashed inside zombies, secret portals, NPCs who admit things only if you dig, it's a really deep game. This is where your stat choices come into play.

If you have a high charisma or wisdom, you have dialogue options not available to you otherwise. I went with a high intelligence and charisma, and the game was quite a bit easier for me.

Graphics: I just looked at this comparison video, and it doesn't really look that much different. I can say that when I played the original, I found the city screen to be grainy and difficult to navigate. In this version, that is not an issue. Everything is very clear and it made a huge difference for me.

I was wondering if younger people would be OK with the look of this game. I saw one review on Steam where a kid said that the game is too ugly to play. It definitely has a 90's "rust" look to it which some might find unappealing.


The other big upgrade that stuck out was picking up objects. I remember in the original, looting could be a real pain, as it was hard to click on stuff in certain areas. They cleaned that up for the most part in this version.

Getting to the End: I have played this game 3 times. Once when it came out, again about 3 years ago, and now. I have never actually finished it. I got stuck every single time. It's one of those games where if you don't play it for a few days and forget what you were doing, you're going to be lost and might just give up.

I generally avoid using an FAQ unless it's necessary. I'm pretty sure I will never get through this game without using one.

There was an Incident: In this newest playthrough, something weird happened. There were a number of possibly connected "incidents" that walked me into a wall.

There's this part in the game where githyanki attack you on the streets of Sigil. They keep coming at you, seemingly in endless supply. I decided not to run away. I stood my ground and killed as many as I could.

This became a comical encounter where I was running around and dodging them like a running back while the rest of my party killed them off. For some reason, the githyanki wanted me dead and they mostly left the others alone.

I eventually set up a "funnel" where the githyanki had to get through my allies to get to me and we just mowed them down like a meatgrinder. I'm pretty sure we killed at least 50 githyanki. Their treasure littered the street.

Toward the end of this encounter, some of the githyanki seemed to get glitchy. They'd run up to me and then not attack. They'd just stand there, twitchy. I got the feeling I'd broken something.

I got stuck shortly after that. I couldn't remember how to get to the next part of the game, which involves the mazes. I went back to this tavern called the Smoldering Corpse. Bored, I saw a table of devils and I thought maybe I'd mess with them and kill them.

So we get into a thing and I cast this spell that sends a swarm of insects at them. This swarm spread to other people in the tavern, and the entire bar came after me. One denizen tore off his skin and revealed himself to be a demon (a glabrezu). He actually helped us kill the devils.

I ended up killing everyone in the bar until it was just the demon and one devil fighting each other. Weirdly, neither seemed able to hit the other. I killed the devil, and struck up a conversation with the glabrezu, who was evil and menacing on his own. I left, rested, then came back and killed him.

I still needed to use an object to go find Ravel Puzzlewell. I eventually realized that the item I needed to do so was gone from my inventory. I might have accidentally dropped it while collecting the githyanki treasure mountain, but I don't think I would have done that.

The item was just... gone. You need this item to continue. I literally could not continue on, at least, as far as I know.

It's pretty sad that the third time I played this game, I made less progress than the times before.

Tabletop Use: The thing I love the most about this game is that it is a goldmine for material. If you run a Planescape campaign, you really need to check this out. It is so in keeping with the tone of the setting that I consider it "official" material.

Honestly, a lot of it is better than what's in the books. It is amazing. This game develops the githzerai race far beyond what had been done in the history of D&D. There are tons of worthy NPCs and locations to use. You can steal the quests, you name it. You could literally run an entire campaign based off of the material in this game.

I might see if I can salvage this playthrough. There is no way in hell that I am starting again from the beginning. I am thinking I will play through Torment: Tides of Numenara, and see what that's like.
Posted by Sean at 9:24 AM

I totally agree that the look of the main dude is... um... unique. I love the Balder's Gate games and I've heard nothing but praise for Torment but I'm just not keen on running around Sigil as a blue caveman with dreds.

Aaron Good: I really don't get why they made him look like that. It's a great game, though, definitely worth playing!