Dungeons & Dragons: A City on the Edge - A Snake in the Grass 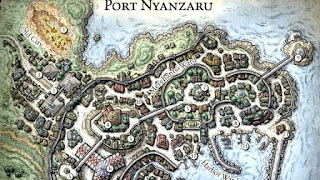 I am assuming these will be up for sale on the DMs Guild soon. It's 92 pages long - a total of 10 mini-adventures. The first 5 mini-adventures are for heroes levels 1-4, the rest are for levels 5-10.

Don't Be a Ruiner: Today I'm going to write about the first mini-adventure: "A Snake in the Grass." I'm going to try not to spoil too much, but if you might be playing this, don't read it! You'll ruin it for yourself and/or the other people at the table. 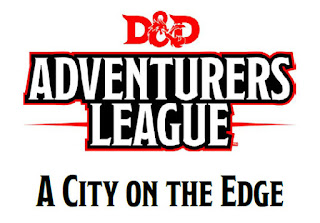 This adventure is about bad guys trying to smuggle an amulet into the city. It's broken into four pieces and is called the Dreamer's Amulet.

It look like each mini-adventure is linked to one of the 5 faction representatives:
I definitely like the name "Soggy Wren".

We learn the details of the death curse. This has been openly discussed on many shows, so I don't think this is new info: 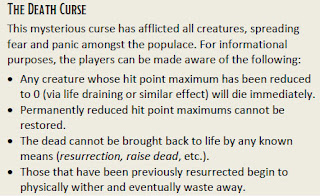 Timing: This is supposed to take 60 minutes. In my experience, DMs running store games take much, much longer than expected. I remember a group in the game store that was still in chapter 4 of Hoard of the Dragon Queen after 6 months of weekly play.

I think some DMs really zoom in on little details and let the players take in the scenery. I can definitely see this adventure taking groups longer than an hour, especially if they're cautious.

The story of this involves the group trying to track down a piece of the Dreamer's Amulet. They end up in a tunnel-type setting which involves mostly traps, hazards, and investigations.

New Traps: This shows off the new style of presenting traps. We get about 4 paragraphs of info - general description, triggers, effects, and countermeasures.

Each trap is very well-thought out. There's a very cool way of activating a secret door, and I LOVE the area that precedes the climax of the adventure.

I have two qualms about this trap thing. When running a game, there's no way you can glance down at these trap descriptions and quickly see what you need to know. I always write shorthand notes. The fact that they stuck the countermeasures (including how to spot the trap!) at the very bottom makes it a real pain for me to reconfigure.

That said, I would guess that there are pluses and minuses to every method of presenting a trap. This method has definitely lent itself to cooler traps without tending toward the mind-bending intricacies of the Hidden Shrine of Tamoachan (which was hell to prepare).

Maps: Adventurers League maps have, up until now, been hand-drawn stuff on a blue grid. I always wondered why they didn't pay someone to make nicer maps. I felt like it did the authors a disservice.

Well, they kicked it up a few notches. It's print-friendly, so it's not full color, but much better! I'll show a small, non-spoilery piece of the map so that you can get the idea:

They even whipped up a player handout! Pretty awesome.

Magic Items: I have talked endlessly about what a pain in the butt it is that the D&D adventures give references to chapters rather than page numbers. Check out a magic item in this adventure:

It's like a knife to the neck. It would take less words just to write what it does! Ready?

This potion heals you for 2d4+2 hit points.

No page number, no chapter number, nothing! Why bother with the elaborate presentation?


Click here to go to the ridiculously great second adventure.
Posted by Sean at 9:48 PM