Dungeons & Dragons: Over the Edge - Five Corpses in Denial 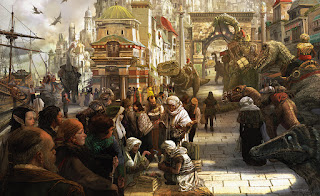 OK! This is the second Adventurers League module for the Tomb of Annihilation. You can run this in game stores and it will probably be on the DMs Guild soon.

If you're going to play this, stop reading!

This is for characters level 5-10. This first mission is really awesome, a fantastic scenario that is beyond perfect for this jungle setting. I think the title of it should have been something different, it kind of undersells the content.

The Plot: The five factions want to find a safe place to build a stronghold in the jungle of Chult. The factions hired a mercenary to handle this endeavor. Her name is Pozzanna Lordeaux.

Pozzanna will be sending the heroes to check out five different locations where she thinks might be a good spot for a base.

Each adventure also involves a faction-specific mission. The missions involve things like finding an amulet, recovering a dead body, or sanctifying a grave or crypt.

The whole thing starts off with a special introductory section. We meet Pozzanna Lordeaux: Middle-aged, short hair, lots of piercings.

Stuff we learn:
We get quick details of each location
The group is allowed to pick which mission to go on. Ouch. Get ready, DM, lots o' prep for you.

This mission is linked to the Lords' Alliance. Klevin, the Lords' Alliance guy, asks the group to look for a jeweled medallion while they're out there. It was worn by Arreni Goldbirth, an explorer who went to the location and never returned.

We actually cut right to the location. No details on 14 days of travel through the zombie jungle?

The Evil One: This place is sacred to Nangnang, a neutral evil Chultan trickster goddess of cruelty.

The group sees that there's blood and bones everywhere. They find small idols of black stone craved to look like Nangnang.

One idol is bigger than the others. It has three ruby eyes that glow. The brighter they glow, the warmer the temperature gets.

We get notes on speeding the combat up if necessary. I love this idea: "When a skeleton is reduced to half hit points or less, it dies and explodes in a shower of bones and metal..." doing damage to all those within 10 feet!

I really like this area. I'll definitely try to use it.

This place is great. There are extremely unique ways to open each section of this location.

When the group figures one of ways to open a section, a solid wall of skulls slides open to reveal a chamber. In each chamber, something special needs to be done.
Once something has been accomplished in each room, a passage is revealed that leads to the chamber's center.

The Death Chamber: Some really cool stuff happens and then wights with rubies in their heads attack!

I love this adventure. It could easily be expanded to fill a 4 hour session. Just add in some encounters in the jungle on the way to the location.

If the other 4 missions are like this one, this will be one epic adventure!

The next one has a magic item with a page number. Did we slip into an alternate timeline?
Posted by Sean at 4:56 PM