Dungeons & Dragons - The Book of the Tarrasque 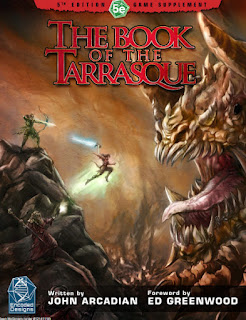 You can get this book right here.

I read Teos Abadia's review of this the other day and it sounds really cool. I bought it both in pdf form and in print. The print one won't be here for a few weeks, but I got the pdf right here, right in my face, right now.

What is the Tarrasque? The Tarrasque is more or less the ultimate D&D monster. There's only one in existence (supposedly). It has been used in adventures in almost every edition, and there's been at least two cults created in different issues of Dragon Magazine that worship it.

It sleeps for years, then it wakes up and goes on a rampage like Godzilla.

This book is 80 pages of material all dedicated to the tarrasque. I'm interested to see what ideas they came up with. 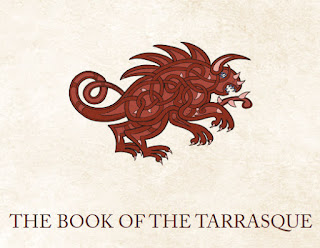 Foreward: There's a forward by Ed Greenwood, who actually wrote the ecology of the Tarrasque in Dragon Magazine years ago. He gives some advice and some amusing stories about old TSR employees using the Tarrasque in their games.

Running the Tarrasque: The author has run the Tarrasque against many groups, so he has a lot of insight as how to best use it. The main thrust is that level 15+ groups can handle the Tarrasque pretty easily. Give it regeneration.

As far as implementing the recovery of hit points, there's a very cool idea on "tiered regeneration". Basically, the more damage the Tarrasque takes, the more points it regenerates each round.
Lots of really good stuff:
Walking the Tightrope: The author has a similar mentality to mine. He talks a lot about holding back, and ways to run the monster in a way that feels menacing without giving away that you are helping the group out.

The thing about that is when the players see that you are holding back, it takes the game down a few notches. Usually the players are too into what's going on to notice, and they're so relieved to have breathing room that they don't think about what the DM just did for them.

When players get to know you, that's where it gets tricky. You don't want to invalidate your own encounter, but in this case it is hard to work around it. It's the Tarrasque! It does a pile of damage in a single round!

I think if you play it like it is a dumb monster (which it is), then you give yourself some leeway. It can have moments of surprising cunning when needed.

One awesome tactic in this book blows my mind involves a zombie and a potion of growth. 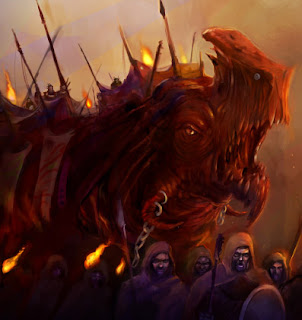 This is an incredibly thorough book, the author has really rolled up his sleeves and got into the nitty gritty. He talks about flying PCs, reverse gravity, polymorph, tricks with bags of holding and portable holes. Then he gets to the wishes.

Wish Spells: I have a real thing about wishes. The advice here is to "look for the loopholes." I don't like screwing over players with wishes, it just feels wrong. If wish is fundamentally a game breaker, then it shouldn't be in the game, right? Who is going to cast a spell like that when they know the DM is going to try to twist it?

Worse, people casting wish have earned it. They're really high level. They clawed their way to the top to get what is one of the ultimate spells. Now we're jut going to block it and slap down everything they want to do with it?

Here's a quote about wishes from page 20 of the book: "Of course you can just grant them with the intent they had in mind, but where is the fun in that."

Well... it would be fun for them! The problem is that the spell could turn the encounter into an anticlimax. I'm not sure what the answer is to this, although the wish spell is pretty limited as it is written in the Player's Handbook. 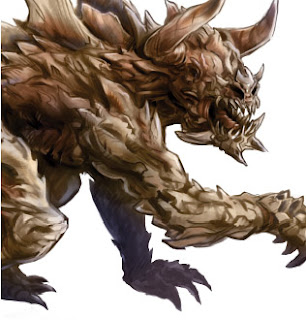 Later, it is suggested that this "Lockworld" was made to keep the Tarrasque imprisoned there.

That is really epic, I am definitely going to use that in my campaign when I can squeeze it in.

There's other really great ideas:
We go over the appearances of the Tarrasque in older editions and products. Some stuff I didn't know:
There are a ton of note on the Tarrasque appearing in 3rd party products and video games. 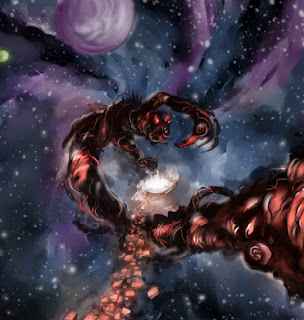 The Machine of Unmaking: We get an adventure for 15th to 20th level characters. Basically, the Tarrasque is on a rampage. The destruction is powering a "machine of unmaking" which is warping the world. The longer the group takes to get to the end of the adventure, the more difficult the final encounter will be.

There's a very handy chart to describe how the unmaking works. In the early stage, when a character roll a 1 on a d20, something they own disassembles into component parts. I love that. At the higher end, the ocean begins to evaporate, forests are unmade... egad.

The adventure seems pretty cool. There are "mini-Tarrasques" normally kept in adamantine cages.

Then we get a pile of handouts. I love the "Inside the Tarrasque" playmat.

The book is very professional-looking and it is very easy to read. The thing I like the most is that it is fueled by experience and expertise. The author read up everything he could on it and he ran many encounters with the Tarrasque.

I personally would have liked more artwork. Some of the art looked too comic-booky for me. I would have liked om e pictures of the Tarrasque rampaging, fighting a party, that kind of thing. I know that art isn't cheap, though!

I think it is definitely worth buying if you have any interest in using this monster at all.

I love assigning "experts to D&D topics. That's one of the cool things about the game. If you use one official thing in your game a lot, and you read everything there is about and expand on it, you are pretty much the world's authority on that thing.

D&D is so vast that there's a billion monsters, items, and NPCs to flesh out. While writing for this blog, I've stumbled upon a few such experts:
Looking forward to finding more!
Posted by Sean at 1:40 PM

I've been curious about this book. Thanks for the review. I'm going to need to pick it up.

Justin Isaac: Awesome... this book was something I saw and liked, but then forgot about until I read a review of it. I figured I would write about it to make sure people were aware of it.