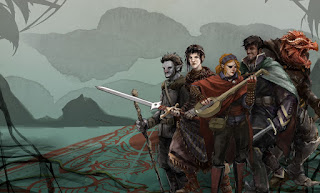 Force Grey is back for another season. This time, the adventure is linked to the Tomb of Annihilation adventure, which comes out in about a month.

If you haven't seen it, the premise is that there is an organization in Waterdeep that hires adventurers to complete missions of particular importance for them. For each mission, adventurers are selected from the ranks of Force Grey based on their skills or who is available at the time.

The bummer here for me is that my two favorite players, Shelby Faro and Jonah Ray, are absent. I know Jonah is busy with the new MST3K, so hey, what can you do? 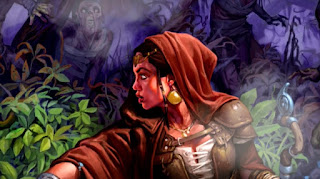 The players introduce their characters. Arkhan was lawful good but recently became a worshiper of Tiamat. Apparently Joe uses this character in his regular campaign. He owns a bar called "The Burning Cube." I'd like to hear more about that.

Jamila is a longtime denizen of Chult who is ready to move on Calliope has a rapier and she "looks like Becky Lynch from the WWE with an eyepatch."

Months have passed since the last adventure. The heroes are in a tavern in Waterdeep. Tyril and Hitch are playing cards with a guy. Calliope is playing music. The two new heroes are not with the party at the start.

Hitch tries to cheat at cards and rolls a natural one. The sailor he tried to cheat is angry, but Hitch bluffs his way out of it.

The door to the tavern opens. A middle aged woman in a cloak enters. She wears the symbol of a white hand, the emblem of the Watchful Order, mages who protect the city. She has come here to tell the heroes to head to Blackstaff Tower. It's time for Force Grey to force some grey on someone or something.

At Blackstaff tower, the group meets with a small woman with indigo skin. She's got a staff with a wolf's head on it. She explains that raise dead isn't working, and certain high masked lords of Waterdeep will perish from the death curse if this isn't dealt with.

The souls of those suffering the death curse are being pulled and fed to a device called the soulmonger.

The soulmonger is beneath a lost city in Chult. Force Grey's duty is to find the lost city. Arkhan joins the group as a new member of the party. He knows Hitch, apparently they've worked together before.

The next day, the heroes take a ship to Chult. The trip takes a week.

The group arrives at Port Nyanzaru. It is very hot. The sweat builds in their armor. This was also mentioned on Girls, Guts, Glory, I guess it' a thing in Tomb of Annihilation.

The heroes hit the streets. They see a domesticated stegosaurus with a rider. It is a beast of burden.

Nature is trying to reclaim the city, vines everywhere. The city is very old and some buildings are ruined.

The group heads to the Thundering Lizard. Calliope scans the tavern, looking for a guide. Let's see if the guides are the same ones on Girls Guts Glory. Calliope rolls a 1.

A noble catches her eye and waves her over. Hey.. these NPCs were on Girls, Guts, Glory. This is the good-looking dude who has a sidekick named Gondolo. They come over and try to impress the heroes.

Arkhan threatens them. Jamila is here in the bar, winning arm wrestling contests. She is low on money and eyeballs the adventurers.

Arkhan scares off the dudes. Jamila sees her opportunity and approaches the group. She starts talking and Hitch immediately says, "You're hired." What does Jamila look like? A female Joe Manganiello!

Jamila says that she can lead them to the city. She'll do it if they'll buy her rations and gear. She also says that Ubtao has blessed her.

The heroes are warned that the jungle is full of undead. 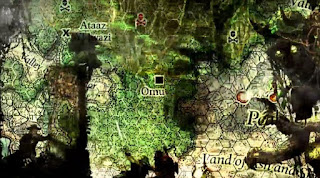 We catch a glimpse of the map of Chult. We actually see right where Omu is.

Jamila leads the group to the market.. whoop.. rolls a one in doing so. Welp. Tyril want to buy some antitoxin from a dude in a tent. The merchant gives him a clump of healing moss. Tyril applies Ronald Reagan's motto: "Trust, but verify." He probes the moss.

Hitch wants to steal it. He creeps over and snatches a clump. The merchant turns, wary. Hitch tells him he's looking for the bathroom. The merchant want to see his hands. Hitch says his hands are covered with feces. Good gawd, how far is he willing to go to pull this off?

Guards are approaching the tent. Hitch keeps saying he has poop all over his hands. Tyril wants to slip him some poo.. no.. the guards come in.

Arkhan tries to bribe them with 100 gold. The guards don't bite. After some deliberations, the merchant decides to take the gold. The guards throw Hitch into the street. They have no moss and they lost 100 of the 600 gold they were given to use for this trip.

I forgot that these episodes are only half an hour each. It goes very quick.

I'm a little torn on whether they should just cut to the action on this show or to run it somewhat like a normal game. If they had started in Port Nyanzaru with a quick explanation of their mission, we'd have gotten to the good stuff quicker. But starting at the start is more like a "real" D&D game, which you probably want viewers who are new to the game to see.

I like that we get to see the DMs of different shows running the same NPCs. I find it very interesting how each DM handles them so differently. Two people can run the same D&D adventure and they usually come out nothing alike.
Posted by Sean at 5:52 PM