Dungeons & Dragons: City on the Edge - Grand Prize of the Oracle 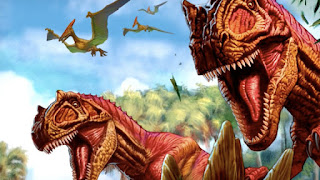 This is the second mini-adventure from the 1st Adventurers League module of the Tomb of Annihilation storyline. This module is available to people who run games in game stores, and I assume it will be for sale on the DMs Guild pretty soon.

Spoiler: If you might play in this adventure, stop reading! This adventure is awesome. Don't ruin it!

Story: We are looking for pieces of the Dreamers Amulet, an evil artifact that is somehow linked to the soulmonger, which is the thing that is causing the death curse and all that stuff.

We learn that the "Old City" section of Port Nyanzaru has three ziggurats, "...each of their terraces reworked into platforms housing numerous tents and bamboo huts." I really like that.

Our heroes meet with... Pock-Marked Po. He's covered in scars, is blind in one eye, and is tended to by trusty female assistants. A very cool NPC.

He wants the group to join an event and try to win the prize. The prize includes a bunch of gold, a magic object, and "a collection of fine perfumes". Perfumes!

The heroes will enter and compete as a group. The name of their group shall be... the Bladefangs. This whole thing has me dying of laughter.

The Market Ward: We learn a bit about the Market Ward of Port Nyanzaru. It has:
So guess what we do in the Colosseum? A dinosaur race!

Each adventurer gets to ride an allosaurus. They'll be racing against another team called the "Green Vipers". Each rider gets a "rider's pole" to poke and prod rival riders.

If you kill someone, your team is disqualified. Using elemental or spell damage is forbidden.

A long time ago, I ran a race in an Al Qadim campaign where the heroes were in a race where the mounts were nightmares. I spent a bit of time cooking up a simple, abstract way to handle the race and it went off pretty well. What they have here is a billion times better.

This dinosaur race section is extremely well-thought-out. I am dying to run this. It's written in a very concise, clear manner and there are so many possibilities for cool moments.

On each character's turn, they can move up one position and take one special action such as dash, taunt, trip, etc. Once everybody has gone in the round, they roll to see if there's an obstacle in their way. Obstacles include mud pits and vine traps.

This is really great. I think that any player would love to go through this.

Once the race is done, we go to phase two: The Gladiatorial Arena!

The group fights some dinosaurs and other stuff in an iron cage that has special vines wound around the bars. The vines have their own little gimmick that I won't spoil.

Reward: If the group is victorious, they are brought up to receive their fabulous prizes from one of the merchant princes! It's a female, but they don't call her a merchant princess for some reason.

Her name is Kwayothé. She's beautiful and is attended to by 3 males and 3 females. I immediately had a million idea for this.

So yeah, the group gets their perfume and everything!

Fantastic adventure. Just a few pages long but full of great stuff! Even if you aren't running tomb, the racing rules can be used in any campaign using horses, chocobos, whatever.

Click here to read about the third mini-adventure. It's got killer plants and a very cool section of the city called Malar's Throat.
Posted by Sean at 10:52 PM