Dungeons & Dragons: City on the Edge - Darkest Dreams of the Defiler 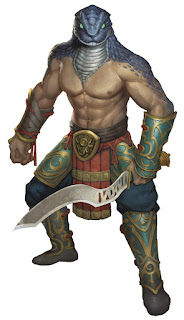 This is the final of 5 missions in the first Tomb of Annihilation module from the Adventurers League. You can play this in game stores and I think it will be available at the DMs Guild soon.

If the group went through the previous four missions, they can now assemble the Dreamer's Amulet. It doesn't have much power unless a yuan-ti wields it, although it does give people within 10 feet feelings of uneasiness.

The heroes will meet the Ytepka Society, protector of Port Nyanzaru.

We go to the Red Bazaar, which is near the Colosseum. There's an inn known as Kaya's House of Repose, which has been mentioned on a number of shows. It is "opulent".

At last we meet Soggy Wren. Here's his deal:
Wren wants the heroes to meet a dude at the Bathhouse to find out what the deal with the Dreamer's Amulet is.

Things go wonky and the group ends up battling zealots linked to the yuan-ti and fighting above a snake pit! There's just one snake in it, but still.

The heroes find some prisoners who are suffering from a sickness... they are "bearing dark thick veins and scaled patches all over their bodies." Turning into yuan-ti!

We get a look at flowers known as "Olarubu" (Vile Beauty). They let out spores that can poison you.

The final battle involve a yuan-ti and "broodlings", which are people turning into yuan-ti.

A decent adventure. I like almost all of the traps and gimmicks in each of these missions. A lot of thought went into them, and it makes most of the encounters feel special rather than filler.

I kind of wish the Dreamer's Amulet had some kind of power. All that work to put an item together, and the heroes can't do anything with it? I'd probably change that.

This thing does a good job of showing off the various locales in Port Nyanzaru. Malar's Throat and Old City are really awesome locations, and I really like Kwayothé the merchant prince.

Tomorrow, we'll look at the adventure for characters levels 5-10 called Over the Edge. Skimming the first mission, I see that it has a "chamber of hair". Should be fun!

Click here to check out the absolutely awesome first mission of Over the Edge.
Posted by Sean at 4:02 PM

Thanks for reviewing all of these! I'm excited for the official storyline to be moving away from the "usual" place and trying something different for a change. Dinosaur racing seems cool, and the rest of the adventures seem quite interesting.

Yeah, these write ups are great. From what you've seen thus far, would you run these before putting the players through Tomb of Annihilation?

Anonymous: Yeah it is pretty Indiana Jones-y, which I like a lot. I imagine the dinosaur racing in the streets is even cooler than what's in the arena.

Coffeemate: Thanks! Yep, I will be doing just that!

The intention of the AL adventures this season is to act as an extra supplement to the hardcover. The DDAL07-01 acts as an introduction to why the players would be going to Chult and then DDAL07-03 through DDAL07-05 act as introductions to Chult itself and its different locales. DDAL07-02 on the other hand, is for tier 2 characters who want to come to Chult and participate in Tomb of Annihilation (since it has different starting points). DDAL07-06 through DDAL07-08 then act as side treks throughout the terrible jungle of Chult. Finally, the T3 & T4 modules are an epilogue of sorts to the Tomb of Annihilation hardcover storyline.

(I'll be running everything, so thanks again for doing these reviews)

Zingbob: Wow, thanks for the info! Some of these adventures are really awesome. They're all very short and rally easy to prepare - should be good stuff.

Are you planning on doing this for all of the AL adventures? That'd be awesome if you were!

Zingbob Co: I could! Maybe I will... first up, I have to do the guide to Tomb of Annihilation. Can't wait to get that going!