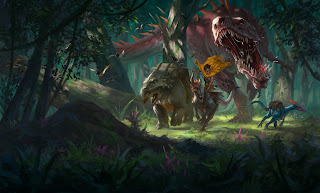 Getting caught up! These two episodes feature the group going through a series of random encounters in the jungle. It gives a bit of a look into what's in the adventure.

Some pterafolk come close. Tyril is still in mole form. One spots Arkhan and swoops down at him.

Arkhan breathes on it and it swipes at him for 7 points. The mole/Tyril attacks and rolls a critical.

The chat is a perpetual stream of the following comments: "Is she from daredevil?" "Is that guy from Zach and Cody?"

Jamilah pulls out her sword, Lady Deathbringer, and rages. She misses. Hitch rolls bad and falls. He gets up and sneak attacks,

Calliope fires off a lightning arrow and blows up four pterafolk. This causes the bad guys to flee.

That whole episode was a combat. I had a hard time getting into it. 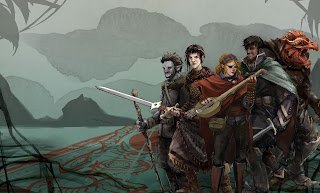 Arkhan scans the area.. rolls a 1. It's 3 hours until dusk. The group pauses for a moment to collect themselves and then continue on for a bit longer.

Jamilah leads the group further into the jungle. They run into a big flower.. looks like there's a severed arm on or near it.

The group thinks a zorbo is nearby. Nope.

Setting up camp, Jamilah is worried about their campfire drawing undead.

Tyril wants to assume mole form and make burrows. What a great idea.

Hitch takes watch. He spots an undead creature wandering nearby. It is heading away from the group. Wait.. there's three more.

Hitch wakes the group up. The zombies are out by the river. Arkhan wades in. Hitch wants to ride on his shoulders. Arkhan is not having it.

Arkhan kicks the crap out of one zombie. They spot another one on the other side of the river. It is swept away by the current.

The group goes back to sleep. Hitch is still keeping watch. He hears a dinosaur in the distance.

Tyril takes watch. He sees some trees shaking in the distance. The dinosaur is still out there.

They make it through the night. That's the end!

When do we get to the fireworks factory?
Posted by Sean at 7:10 PM