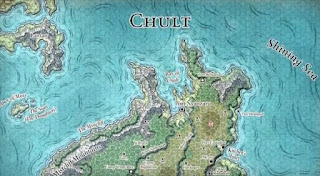 This week, the adventurers head into the jungle. Half hour episodes are very easy to watch.

The heroes are getting equipment for their expedition into the jungle to look for the lost city.

The adventurers head into the jungle. It's hot, there's a thick canopy up above and they hear all sorts of weird animal noises.

Jamilah leads the group to an area near the river. She's wary of flying monkeys (seriously). The group hears a roar in the distance.

The heroes hide, and Tyril turns invisible. A tree falls over. A huge creature with plates on its back comes lumbering by. It has a mace-like tail. Stegosaurus?

It passes by. The heroes set off a plant that releases a spore cloud. The group makes their saves and are unaffected. They notice there are many more of these plants all around them.

Tyril has a great idea. He transforms into a mole and digs a tunnel to get the group out of the area safely. It takes about half an hour.

The group makes their way through the tunnel safely. On the other side, they find the bones of a long-dead explorer. There's loot on this here body!65 gold, some silver, a rusty short sword, a mostly-dissolved suit of armor, and a pair of boots that are untouched.

Calliope casts identify. The boots are magic... boots of elvenkind. Jamilah is wearing a pair just like them.

Calliope keeps the boots and the group continues on for a bit. They've traveled for a few hours, total. Tyril hears a birdlike noise. Arkhan warns them that there are a band of evil aarakockra here that serve a medusa. That's where we stop.

Nothing wrong with this, I guess. In the teaser, they reveal that the group encounters pterafolk next week, so things should get rolling a bit.
Posted by Sean at 3:00 PM

I see you really like these live action plays, but why the compulsion to narrate them? Isn't it a visual media (or audio podcast)?? Also, good work on cleaning up your grammar/syntax and spelling.

I for one enjoy your narrations of these vidcasts a lot. In fact, the only reason I started watching DCA was how enjoyable you made it sound. So keep up the good work!

jburgos: The shows are long. Writing these are a way for people to keep up with them and/or see if it is something worth watching. I write campaign summaries of my own games and I thought it would be fun to do the same for these shows.

Sharq: Thanks! I appreciate it!