Dungeons & Dragons: City on the Edge - Life as We Don't Know It 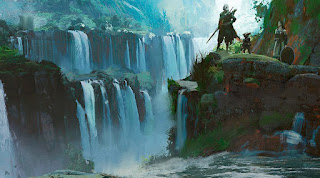 Today we're going to check out the third mini-adventure in the first Adventurers League Tomb of Annihilation module. I am guessing this will be up on the DMs Guild soon. It is available to Dungeon Masters who run stuff in game stores.

The previous adventure was ridiculously great. From what I understand, the dinosaur racing rules are actually in the Tomb of Annihilation. I think that most dinosaur races actually occur in the city streets. That sounds like a lot of fun, probably my favorite thing that I've heard about from the adventure so far.

We learn a little bit about an area of Port Nyanzaru called Malar's Throat:
I really like that. Fights on rope bridges are definitely something that should happen in D&D.

And look at that... we kick it off with a battle on a rope bridge. The group meets a tabaxi (cat person) named "Screaming Wind." 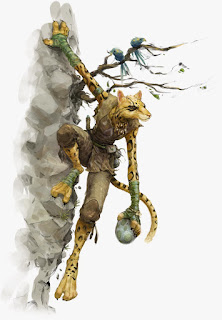 The tabaxi names... so many joke opportunities. Let's make some tabaxi names for players to groan at:
We meet the group's NPC tabaxi buddy, Screaming Wind. She's got black-spotted fur and green eyes. She keeps quiet and is a skilled hunter. She has a secret, tragic past. She has a VIP membership card to the Emerald Enclave.

We learn that Malar's Throat is getting hit with all sorts of bad stuff:
The heroes are going to handle this. During their investigation, they encounter:
Wow.. then there's an intense scene with a woman who is dragged away. It says: "Sadly, there is nothing the party can do for her." Not in my campaign, pal!

Tomb of Annihilation has a lot of plant-perils. There are matabo vines here given the full trap treatment with a trigger, effects and countermeasures. Seems really cool.

Then we get a final encounter with some grungs (frog-people). There's a chance some party members will get charmed, which is always a tricky thing to handle in a fun way.

There's an aftereffect of the charm. For weeks, you'll have dreams of serpents and a soft voice will whisper to you, urging you to join them in the arm of oblivion. Sounds like some Dendar, the night serpent stuff.

Pterafolk: Pterafolk are mentioned in this adventure, and while you find some pterafolk corpses you don't actually fight any pterafolk and thus we do not have a look at pterafolk stats... yet. Maybe we'll get a gander at them in one of the upcoming mini-adventures.

This adventure feels a little disjointed. A whole lot of different things are mooshed together and it comes off weird. That said, a lot of times when an adventure looks flat on paper, it comes to life when you run it.

I think there should be some more mentions/clues about the grung earlier on. If I was a player in this, I'd perk up at the idea of fighting some pterafolk and then would stifle a groan when we end up fighting grungs. I am not a grung fan! I like Kurt Cobain, though.

I scanned ahead. Each of these adventures only has a couple of monsters. There are pterafolk, but they're all the way at the end.

If you're wondering, they are CR 1 monsters and they have a power called "terror dive", which is like a charge that also give you the frightened condition.

The next one involves undead, looks very cool.

Click here to check it out. It's got zombies that run really fast.
Posted by Sean at 1:18 PM