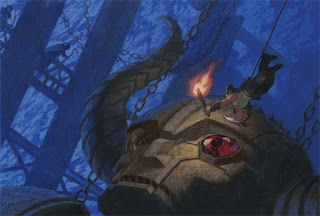 I'd like to point out that Chris Perkins did an AMA on the Dice, Camera, Action subreddit right here.

I can't believe I forgot about it!

I don't want to spoil everything, but here are the things that I found most interesting from this AMA:

Crossover: The Waffle Crew might run into members of Force Grey and Acquisitions, Inc. in the not-too-distant future.

Favorite Moments: His favorite events of the show so far:
Murderbot: Murderbot/Simon/Pidlwick 2 is one of his favorite NPCs that he has ever run.

Svardborg: Chris says we'll be seeing frost giants before the end of the season. That frost giant lair in the book is very wide open,  I can't imagine what the heroes will do.

Ravenloft NPC: One NPC from Barovia will pop up soon. He says that it is also possible that the group will go back to Barovia. That would be pretty crazy, right?

We pick up where we left off. Diath just freed the fire primordial, Maegara. She is a giant thing made of fire. Her flames are so hot that her very presence kills all of the prisoners that Diath was trying to save. 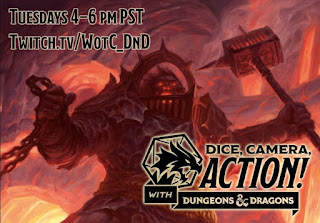 Diath takes 35 points of fire damage from Maegara and he backs down the hallway. Diath orders Maegara to attack the adamantine heart, but she doesn't speak common. He technically can tell her what to do for one hour, but she doesn’t understand him so he’s screwed! Maegara is so hot that she is actually melting the interior of Ironslag.

Diath retreats to where the group is, outside. He sees the dao (earth genie) fighting a fire giant and Evelyn’s horse Mourning Glory is being chased by hellhounds. Evelyn lying is in a pile of hellhounds. They all just got hit with a thunderwave.

Duke Zalto has been turned into a chicken. There is just one fire giant still standing - Paultin had sent two giants running with a fear spell. Strix polymorphs a second giant into a chicken.

All that's left is hellhounds. Evelyn has her armor of invulnerability on, so the dogs can't hurt her. She keeps calling them puppies. She uses a command spell to send the hellhounds chasing after the fleeing giants.

Strix decides to try to banish the dao because she doesn't want him to get that iron golem. The dao is working for a sinister dwarf clan.

The group runs away. Here comes Maegara! She emerges from Ironslag and starts immersing creatures in her raging inferno.

The heroes run through the snow for a minute. The dao's banishment is over, and he is flying after the group. He's wielding Harshnag's axe. He attacks!

The group tries to trap him in the flask. Fails. Tries to use a vistani curse. Fails. Paultin stumbles over something in the snow. It's the corpse of Harshnag's giant bird! Well, this going poorly!

Evelyn tries to parlay with the dao. She rolls a 2. Yargh. The dao snaps his fingers... her armor vanishes! The dao hacks into her and does 23 points of... wait... Anna realizes she has inspiration. She wants to roll again. Chris says OK. he gets to add a d8 to the roll... 4. Not enough.

Evelyn’s getting chopped up. He hits her again.. 41 damage! That's 64 points, good gawd.

Paultin busts out the eyes of charming. He tries to persuade the dao to back off. Rolls bad. Man! Diath tries to use the flask again. The dao makes his save and then he cuts down Diath.

Strix teleports, grabs the iron flask, holds it up and.. traps the dao in it! Wow. Dao failed his save! Good thing, that genie is really powerful.

The crew looks back at the mountain. Lava is pouring out and there’s smoke everywhere. The group makes their way back to Citadel Adbar, home of the dwarves who sent the group here in the first place.

Jasper is at the citadel and he has the baby owlbear, Waffles. She grew a lot, Chris says the owlbear is 25% bigger. Both Strix and Evelyn call Waffles to come to them. Chris wants persuasion checks. Evelyn with a 21. Strix with a 23! She wins.

The group does some shopping. Evelyn brings Murderbot's parts to a dwarf toymaker, who has a rally funny mumbly voice. This voice is right up there with Barmy the lich, in my opinion. He can make reassemble Murderbot in 7-10 days and he'll do it for 1,000 gp. Evelyn haggles him down to 500 gp. She doesn't have it.

She rejoins the group and Diath offers to pay. He's got 5 gems worth 100 gold each. Paultin puts his hand on Diath's shoulder and says, "He has two dads now." Diath is not amused. Thus ends the Waffle Crew Civil War, which was, in retrospect, a cold war.

The group goes to meet with the king of the dwarves. Paultin spots an attractive bard and he veers off in her direction.

Strix spots followers of the Morninglord! Hmm... their symbols aren't right. The group realizes that these symbols are in the Barovian style. These people are from Strahd's demiplane!

What the... one of them is Van Richten! That’s where we stop!

Chris talk about the Stream of Annihilation. The waffle crew is going to kick it off with a live game. 10:20 PST and 1:20 PST Eastern time. It will be 90 minutes long. The group will be in costume. There will be a special guest who will play with the group.

We are 50 shows in and I'd say it's been very good. I learned a lot about DMing from Chris Perkins. I've probably said it before, and I've never expressed it in a way that I'm happy with, but here it is:

There are no good DMs. I don't mean that literally. Chris is great! What I mean is that it is actually impossible to multitask well enough to handle everything a dungeon master needs to do to run a game correctly. Here's some of the things that Chris and all of us have to do during a session:
For me, the main struggle as a DM is between rules accuracy and pacing. I can't remember every rule. When I see Chris Perkins look a rule up in the Player's Handbook - the book that he helped write - that tells me that it is literally impossible to remember everything you need to run an "accurate" game. You would have to stop and look rules up. That hurts the pacing.

Judging from these online shows, people are choosing to focus on pacing, keeping the game moving. I can tell you that prior to 2012 or so, it was rules accuracy, big time. Most groups that I saw were rules-first, and by gawd you would sit at that table while people flipped through books and quibbled over finer points for a good portion of your evening.

Dungeon Masters: So I think what we have on this show is a great model for DMs, a sort of reality check on how a game can flow. You can learn from Chris's ideas and choices. It's also nice to see a group that plays a lot. It seems like most groups in real life don't really get together that much to play the same game, the same story over months and years.

Players: Players who watch this show can observe how you should behave at the table. To me, this waffle crew is a very good assortment of players because they are, by and large, unselfish. Usually it is the selfish player that ruins the entire campaign and kills groups.

Whats the New Adventure? There is a fair amount of speculation on what the new storyline is. There's a person named Prakriti in this thread who laid it out really nicely.

I'm going to try to watch and write about as much of that stream as possible. I think I'm going live-tweet my thoughts, so feel free to check out my twitter right here.
Posted by Sean at 2:00 PM

A couple minor corrections: you accidentally said "Paultin is not amused" instead of Diath.
Also, those Morninglord followers weren't imposters-- Chris said the slightly altered symbols reflected the Barovian interpretation of Lathander (who the Barovians didn't even know as Lathander, but just the Morninglord). Hence, those symbols were a tip-off that they were from Barovia.

Great 50th episode! Appropriately climactic. Can't wait to see more of Van Richten, especially when Paultin is back (as Nate sadly can't make it to the Stream of Annihilation).

Thanks! I'll fix it. Was a good one. I'm looking forward tot he group jumping in to the Tomb of Annihilation.