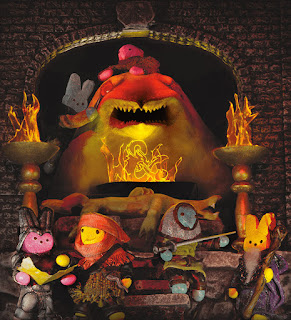 It's that time again where we add a plus to a dragon. You can read the new issue right here.

Real quick, I think this is by far the best issue yet. If you have even the slightest interest in Tales From the Yawning Portal, you should check this out. It is loaded with art and TONS of maps from the adventure.

The cover this month is a peeps diorama. I think I had written about peeps-flavored oreos recently, which I never did buy but I sill sort of want to. I can't imagine it being anything more than brightly-colored ipecac.

This diorama was done by someone who I follow on twitter, which is pretty cool. I don't know Dani Hartel, but I could conceivably declare that I am "loosely affiliated" or "twitter-connected." 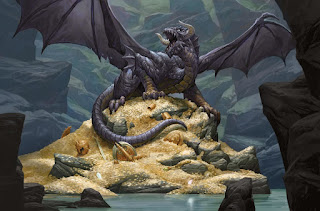 I'm not big on fiction in general, but this series of stories has some Yawning NPCs you can stick right in your campaign:
The Yawning Portal has a stuffed hyenodon head from Tamoachan on a wall. 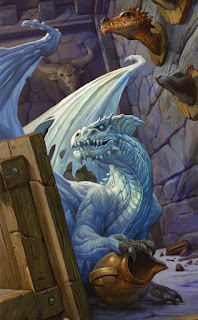 An interview with Bruce Cordell! He's done a ton of awesome stuff in D&D, including the Illithiad, probably my favorite D&D sourcebook of all time.

He says that when making this adventure, they sat down and thought up scenes and things they thought should be in the adventure, and made a story around that.

Meepo was put in there to give even experienced players pause. What do you do with a crying kobold? 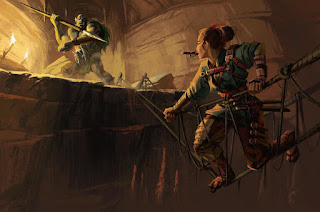 He talks about the beginning of the adventure, where a group who tries to march in the front door is met by a massive horde of orcs. He says that this was done to teach players that arrow slits and strong gates are actual obstacles. The roper was put in there on purpose to teach player that it is OK to run away sometimes.

He talks about playtesting the forge,where a gnome character had levitated and ended up unconscious, hovering in the air and bleeding to death.

The encounter with the dragon was meant to be a situation that spread the group out so that the dragon could pick them off one at a time. 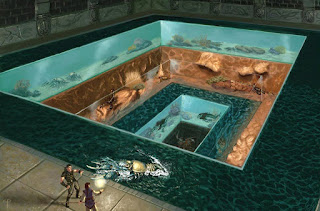 This is an interview with Claudio Pozas, who did the map of White Plume's surroundings. It mentions that he wrote a 4e adventure set in Dead Gnoll's Eye Socket, which I sort of remember. I should definitely check that out.

I didn't realize Claudio did the art for the weapons and the aquarium. Long ago, I had bought these Arcana Unearthed tokens that Claudio drew. He was good then, but he has improved so much it is insane.

An interview with Scott Fitzgerald Gray. He talks about megadungeons and the pitfalls of running them. He always puts teleport circles in them so the group can leave without creeping all the way back the way they came. 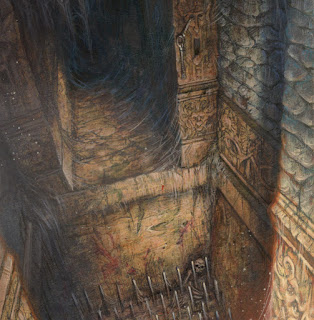 Creighton Broadhurst cooks up some lists of stuff one might hear or find in the tomb of horrors. There are a number of amusing references to NPCs, pregens and real-life characters.

"The mortar around one of the bricks in a wall is in bad repair. The brick can be removed to reveal an empty niche beyond."
and

"Dried spatters of blood mark out a twisting pattern across the floor. After a short distance, the pattern vanishes abruptly, as if the creature that was bleeding disappeared."

We get an article about the enhanced edition of Planescape: Torment. They say that they didn't add content, they just tried to clean the game up. My biggest question is if they tweaked the movement at all, because that was a bit of a pain waiting for the group to run all the way over to the spot you clicked. It works on tablets, too. That's crazy.

If you've never played this game before, all you need to know is that this game involves tons of dialogue and reading. If that is not your thing, then you won't like this game! Anybody else will really like it, I think. 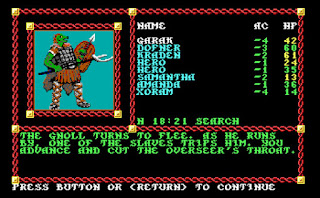 Shannon Appelcline gives us a history of D&D video games. He talks about the old gold box games from SSI. As a kid, I had a friend who was really into these. I distinctly remember going over to his house and watching him tear through a dungeon in Pools of Radiance, it was pretty awesome.

Best of the DMs Guild

This time it is Trouble in Waterdeep, an introductory adventure. I have been having trouble downloading these things. I have realized that it is a firefox issue! Come on, firefox, you're killing me.

We get a bunch of D&D stories from A software engineer. Very amusing stuff, I love hearing this kind of thing. The best one is probably the one about the guy who forgot he gave away his ring of feather falling.

There's a big article on D&D Beyond, the digital reference thing. You can make characters and look stuff up real quick. I probably should have reviewed this thing by now, I'll get right on it.

They're working on a game called "Dungeon Chess" which involves D&D monsters killing each other on a chess board.
Posted by Sean at 7:36 PM