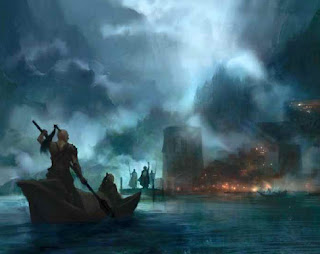 Last week, we played some more of the Eberron campaign. I have a 9th level sorcerer who now has a staff of power.

We're on a quest to get three gems from three different Eberron planes. Eberron has its own cosmology and I know absolutely nothing about it. That makes it very fun for me as I have absolutely no idea what to expect.

I googled the Eberron planes just to figure out the name of the place we went to. The DM told us what it was, but I couldn't remember.

We had come to some kind of feywild realm.We were looking at a city with lots of giant birds flying over it. There was a huge tree on top of it with tendrils that shot beams of energy. The birds were trying to snatch these seeds of power from the roof but were getting slaughtered.

It turns out that our gem was there on the roof, too. I had twinned a fly spell. We approached a bird cautiously and befriended it. We ended up with giant bird mounts.

I flew close and used telekinesis to snatch the gem. The party fighter got a seed.

The tree shot me with a laser beam (a sunbeam spell). My bird died! I fell all the way to the ground below.

There were redcaps down there, a volo's monster. I have never, ever encountered redcaps in D&D before. They have steel boots and they started gleefully kicking the crap out of me. They dropped me to 0 hit points.

I have an amulet of life protection that automatically stabilizes me when I drop to 0, so I never have to worry about death saves.

The other heroes flew down, fought the redcaps, and revived me. I cast wall of force using my staff of power and created a protective dome that shielded us from the redcaps.

The others were hurt as well, so we took a few minutes to recover. The fighter's bird was in the dome with us. It wanted the magic seed.

It ate the seed and transformed into some kind of golden ultra-bird that was super-fast. We climbed on it, I dropped the dome and we flew away, free.

We went back through the portal. That was one gem acquired! 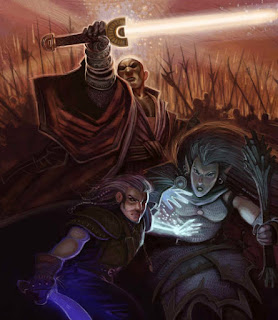 We took a long rest and then used my well of worlds to enter another plane. I think the DM is actually rolling on a chart to see which plane we appeared on. Did he cook up a scenario for every plane?

This time, the well brought us to some kind of ocean plane. There was a storm overhead. I think this is Kythri, the Churning Chaos, but I could be wrong.

We went into the city and bought some potions and scrolls of water breathing.

The wizard has this robe with magic patches that create different things. She has one patch that creates two rowboats! Handy!

We entered the realm. In the distance was a floating tower that actually flipped upside-down every so often. As in, the top of the tower swung so that it was underwater. The roof became the basement, and vice versa.

We rowed close. We climbed in through a window and made our way to the roof. The DM began rolling each round to see if the tower flipped. We got extremely lucky. The tower didn't flip once!

There were four slaads messing with the gem we needed. We started dropping magic bombs on them. A few raced forward and attacked.

I used telekinesis to snatch the gem out of their hands. My plan from here was for us to run down the stairs and I'd make a wall of force blocking them from following us.

It didn't quite work out, as the others couldn't get away and one slaad pursued me down the stairs. I used telekinesis to keep the slaad away from me and to clear a path.

The other slaads were killed and the group joined me in the stairs. We fled to the rowboats while I held the slaad back with telekinesis.

We rowed back to the portal and escaped!

We have two gems. We had to stop there.

I really like how the DM comes up with these scenarios that are so different from each other. I don't think I ever would have come up with that flipping tower, that was really cool.

We need one more gem and then something is going to happen. I think we're actually going to connect in some way to the world in our previous 4th edition campaign, which is Nerath/the Nentir Vale, the default 4e setting.

I love my staff of power. It's the greatest thing ever. Was a good one!
Posted by Sean at 7:50 AM

Probably a Robe of Useful Items, that is a fun one.