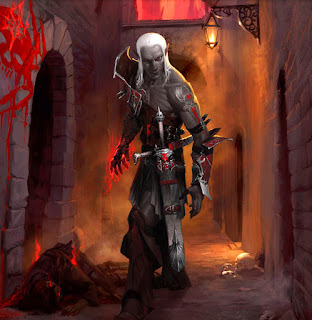 Episode 47: Apocalypse Drow I decided to go through the Storm King's Thunder adventure to look some things up, as I couldn't remember much about the story in Ironslag. I put that information at the bottom of this review. It has spoilers!

The group is in a fire giant lair and the giants are beating the bejeezus out of them. The group is allied with an earth elemental and an iron golem. A dao disguised as a dwarf is around here somewhere.

Sam Sykes is playing Kozin, a drow. We start the session off focusing on him. He is with other drow who have arrived at the outside of Ironslag, on that stairway that zigzags all the way up the cliff wall. They find the remains of the chimera that the group killed on their way in. They see a giant bird... that's Harshnagg's bird, I think!

Kozin shoots it with a crossbow bolt. The drow sleep poison kicks in and the bird falls allll the way to the grond. Wow. The drow enter the complex and make their way to the huge room that the group is in. The drow watch what’s going on while lurking in the shadows.

Strix and Evelyn are making death saves. Waffles, the baby owlbear, actually runs over to the drow. The group eventually gets Waffles back.

Diath has a sword at the duchess's throat. He tries to hold her hostage, but his intimidation roll does not inspire fear in Duke Zalto. Zalto is sure that Diath’s tiny little sword can’t do his wife great harm.

Kozin casts a darkness spell to give the heroes cover to escape, which outrages the other drow. Their only task here is to deliver the flask.

Diath stabs the duchess and does a cool 24 points of damage. He springs off of her and tries to find Evelyn and Strix.

The female drow shoots Paultin and now he's down. It's just Diath and Kozin. Oh no, Evelyn failed her second death save. Not good!!

The drow go to hand over the iron flask to the giants. Korin tries to trip him. The drow are furious. Kozin starts running. One of the drow hits him with a lightning bolt. 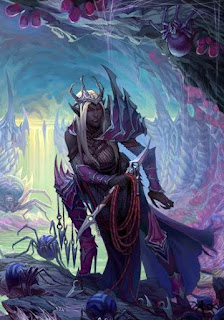 The group runs into the kitchen. They have been on the brink of death for a few sessions now and they are desperate to get out of this situation. They bump into Jasper the dwarf, who casts a mass healing spell on them. Jasper is the guy that they freed from the duke’s maul.

The group casts a darkness spell to cover their escape, but the giants are nearby and hear the group talking. Strix looks at the chimney and realizes the group can climb up and out.. probably. The giants can’t fit in the chimney.

They roll really well on their climb checks and they ascend safely. They emerge in a cave. Evelyn has an idea to block the chimney with a boulder.

They take a minute to rest... and now Kozin is trying to convince them to go back in! Wow. The group doesn’t like this idea. They need a rest!

Kozin explains that the giants have the flask, and that in the flask is Maegara, a fire primordial. With it, they can put together that big colossus/mech and send it on a rampage (it's called the Vonindod, I believe).

The drow explains that if the flask is opened normally, Maegara will be free, which obviously is very dangerous. But she can also be used to melt that adamantine heart. Destroying the heart will end the threat and the mountain will explode.

Evelyn has a great idea: Steal the heart and blow it up somewhere else. That might not be feasible, because the heart is very big. Kozin says that the explosion might not be instantaneous, they might have time to escape.

Heyyy…. Paultin pipes up and has a great idea. Paultin says that the WAFFLE HUT might protect them from the explosion. Nice.

The drow realizes that Maegara might already be freed down there. That’s where we stop.

I read Storm King’s Thunder, but I really don’t remember all that much from it. I decided to refresh my memory. This is full of spoilers!!

Lightfall Replacement? I forgot that King Harnoth of Citadel Adbarr will reward each character with a magic item if they complete this mission. That means that Evelyn might get some really cool replacement for Lightfall, or perhaps an item that can bring it back.

The Drow: Duke Zalto's deal with the drow of House Xorlarrin is that if they bring him Maegara, he will use the vonindod to destroy their enemies. These drow once inhabited the underground city of Gauntlgrym, but they were driven off by dwarves. They want the vonindod to go kill the dwarves.

Using Maegara: It says that once Duke Zalto has the flask, he traps Maegara in the adamantine forge. The fire becomes hot enough for the giants to begin reforging the vonindod.

The Adamantine Doors: They are 50 feet tall, airtight and soundproof! So that means the group couldn't use gaseous form spells to seep through the cracks and escape. The doors only open if a fire giant says the passphrase in the Giant language. The passphrase is on page 183.

Kozin and Friends: The drow are detailed on page 186. There is Draac and Taal Xorlarrin, a pair of drow mages, and six elite drow warriors. Each mage can attempt to summon a shadow demon, which is cool. Maybe they will summon shadow demons to track the group.

Timeframe: When Maegara is freed, it is compelled to obey the commands of whoever freed it for one hour. After that, it goes berserk!

Jasper’s Story: Jasper's story is on page 184. It looks like Chris changed him quite a bit.

Maegara is Deadly: Maegara's stats are on page 241. The group should definitely stay far, far, farrrrr away from this thing!

There is no Adamantine Heart: The whole reason I looked in the book was because I couldn’t remember what the heart’s deal was. I didn’t remember anything about it at all. Why did it destroy Lightfall? Why does it blow up?

There is no adamantine heart in this adventure. Chris made it up! That means anything can happen next week.
Posted by Sean at 2:02 AM