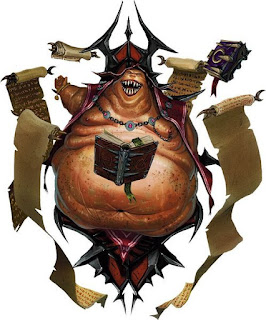 I finally finished Emirikol’s Guide to Devils. I feel so good having it done! It was fun to work on but it was definitely quite a grind. I just didn’t know realize how much time it takes to do these things.

Slimes: When I prepared for this session, I wanted to do an adventure focused on slimes and Juiblex, the demon lord of slimes. There is a pathfinder book that mentions a realm called the Abyssal Undersump, slime tunnels that connect layers of the Abyss. As soon as you hear the words “Abyssal Undersump,” you know you’re going to use that in your campaign in some fashion, right?

Making Up a Dungeon: I was afraid I was going to draw a blank when it was time to make up stuff for this session. It’s hard to come up with encounters from scratch. Worse, I looked at the 4e Juiblex article and there’s really not a lot in there that could help me.

Filth Person: The one thing I had was the Fulsome Queen from Wrath of the Righteous (a pathfinder adventure path I’m looting for this campaign). She’s a slimy woman made of filth! That’s gold where I come from. I’ve been waiting to use her for a long time.

I googled slime adventures and got a little bit of inspiration. For the most part, I made things up. I kept it basic and I though about a D&D sewer and what you could do with that. I came up with this:
It worked out great!

We started off with some of that sweet downtime activity.

Truename: Theran obtained a devil talisman, which gave Theran the truename of Nin, the heresy devil that serves Bidam. Nin is a real jerk and with the truename, Theran has a lot of power over him. I also used this to remind Theran that he knows the truename of a nascent demon lord trapped in the interior of Azzagrat – Xanthopsia, Queen of Obscenity! She swears a lot.

Mel Narnia: Last session, the group took D&D Trump down. Where will poor Mel Narnia and her son, Baron Flumph, live? The group let her live in the mansion they put a down payment on last session.

Theran’s Spell Quest: George told me last time that he wants to learn almost every spell. So he joined the Society of Luminous Aether in Sigil (membership costs 1,000 gp per year). They have a library full of spells and tomes. He copied down every spell over the course of a few days.

Family Time: Bidam is married to a “good” demon lord, Bazuuma. I made up a ridiculous family skill challenge involving a baby dragon who wouldn’t eat his demon crustacean dinner, a daughter who melted her dessert and cried, stupid stuff like that.

The Lifepearl: Then I had Bazuuma ask Bidam about the lifepearl the group still has. That thing can raise the dead about 20 times, create a plane or a race! She floated the idea of using it in the core of Burningwater, her abyssal realm. She senses that the Abyss is afraid/repulsed by her positive energy. She wants to see if she can transform it into something else. Not now, but down the road.

The Senseless Court: The group visited the abyssal layer that Cabiri ruled. Long story short, it’s full of demon beholders at war with each other.
Zariel: The group had told the ruler of the first layer of Hell that they’d bring her a vat of holy water. She needs it for a secret plan. They delivered it. When they arrived at her ruined, burned castle, they could hear her whispering in a back room to her severed angel heads. Last time, they crept around and eavesdropped, and she almost killed them. This time, they stayed where they were.

Zariel was given the holy water, and then she showed the group another plan of hers. Thanks to the heroes, the devils had claimed a layer of the abyss – Onstrakkar’s Nest, formerly ruled by Lamashtu. Zariel is having these massive chains of baatorian green steel made. She is coming to try to pull that layer of the Abyss into Hell! She wants to merge it with her realm, to tame it. She wants to turn chaos into law.

The group was a bit dumbfounded at this plan. I think it will be an epic adventure that we’ll do pretty soon!

Miscellaneous Threats: We did a bunch of other stuff with their businesses. Iggwilv magically threatened Theran again through a sending spell. She is trapped in Graz’zt’s palace, and she wants Theran to convince Graz’zt to let her go.


Once all that stuff was out of the way, it was time for the heroes to lead the devil army through the Abyssal Undersump. Their goal was to get to Thanatos, the abyssal realm once ruled by Orcus (he’s dead in my campaign). Now it is ruled by Lamashtu.

The ultimate goal of this whole Blood War story is to march across Thanatos, Kill Lamashtu, and help their pit fiend friend take over Thanatos. The pit fiend is going to defect from the devils and become a demon lord all his own.

The group was accompanied by Nin the Heresy devil and Bovina the cow lady/minotaur/thief/pirate.
They scouted ahead of the army to clear the path of any obstacles.

Green Slime Ceiling: The group forced Nin to go first. He has a floating throne. He also has a ring of evasion, so once the slimes started dropping, he was making some sweet dodging maneuvers. After a bit of experimentation, the group saw that the green slime was destroyed by fire, so they burned it all away with cantrips.

Yellow Mold Statue: They smartly figured out it was yellow mold and used fire again to destroy it. In the secret compartment of the statue were two vials of powdered gelatinous cube. You add water and throw it a bad guy. It shatters and turns into a gelatinous cube. Pretty sweet, right? Jessie liked that one.

Chess Board: The group prodded the chess board floor and saw that the black squares were trap doors. They dropped you into a big pit full of combined slimes and oozes! The heroes realized it was very cold in here, took a look around, and saw the brown mold.

It took a bit of experimenting, but they finally figured out that cold damage destroys it. Fire makes it expand! They were extremely alarmed after hitting it with a fire bolt. 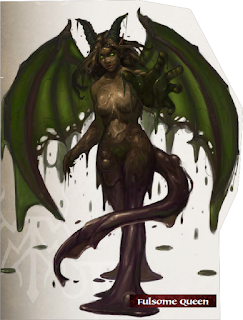 Slime Lake: My campaign is stupid, so you can probably guess what the Fulsome Queen wanted as payment to cross the lake. You know it. They had to poop on her. And they did. We rolled for it, of course. I’ll spare you the details.

There was this whole thing about tipping over a massive statue to create a bridge across the lake.
I had another room planned, where this slime from the 4e article was going to attack the group, popping in and out of holes in pipes and statues. I like the name of this creature: Darkness Given Hunger. But we had no time so I skipped it.

The Pipes Room: I was worried I’d have a hard time describing this place so I did some sketches. Jessie loves it when I do these, she likes make fun of how she can’t figure out what the hell it’s supposed to be.

There’s three slime waterfalls falling through the grate floor, blocking the portal to Thanatos. The group needs to operate this magic panel and “turn them off.” Theran realized that each of these activities were tied to other pipes above them. A whole lot of shifting was going to take place. So, it went like this:
Nin has a flying throne. He’d been complaining all night. He’s always been shifty, looking for a way to take down Bidam, his “master.” Now he had his chance.

Bidam got on the throne with Nin and they flew up. Nin suddenly turned and dumped Bidam on a gelatinous cube conveyor belt! Bidam plopped right in a cube. To his horror, he saw that the conveyor was going to take him through a hole in a wall into some kind of lime tunnel full of gelatinous cubes.
The group freaked out. Bovina chuck a rope and grappling hook on a pipe. But the slime spray did too much damage and she went down!

Theran Misty stepped up 30 feet and balanced on a slippery pipe. He mage-handed the rope to himself and climbed up some more. He got up there and helped Bidam get out of the cube.

Theran saw Bovina was down. Bidam jumped across a gap and landed on Nin’s throne. Nin slammed him into a wall and Bidam failed a dex save. He fell 50 feet to the floor!

The floor is grating. Bidam is heavy. He’s wearing plate mail. I rolled to see if he crashed through the grating. Nope! He just dented it.

While that was going on, Theran was turning the wheel and turned off the sprinkler system. Bovina rolled a 20 on her death save! She popped up and she was angry. She did a sweet swinging maneuver on the rope and tried to jump on Nin’s throne, but.. she fell. She fell right on Bidam, and the grate gave way! They plunged into the slime river beneath the grate.

Bidam activated his armor so that he would take no damage and did his best to keep Bovina out of the slime.

Theran was quick to find a solution. He levitated Bidam. Bovina was on him, and floated up with him.

The group accosted Nin. The army came in. The pit fiend said it was time to demote Nin. The pit fiend has the power to turn devils into different types of devils. He thought a spined devil would do.
George asked me if he could keep Nin’s flying throne. Sure! I gave him a griffon lat session, they’re 13th level, it’s time to fly around, right? That seems really cool, a wizard on a flying throne.

The army marched through the portal. Drokkarn, the pit fiend general, had a map. It said that they would emerge near the “city of Licus”. Once they got there, they realized that was a typo or bad handwriting. They emerged next to the city of liches!

Yes, in Thanatos, there is a city full of liches. That’s where we stopped!

Very good session! I was very happy that it felt like an “adventure”. It’s cool to do stuff other than combat, but it is hard to pull off without being boring or flat. We did well!

Next time, I think we’ll do a little with the liches and then I want to do a blood war naval battle and use some demonic chaos ships.
Posted by Sean at 1:55 PM