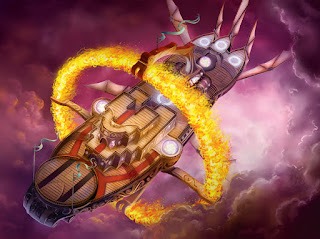 I have put together a collection of information on chaos ships, magic vessels that have appeared in many editions of D&D. Chaos ships are used by the demons use to battle the devils in the Blood War.

I feel like I’ve missed some stuff, but I can’t think of where else to look. Google isn’t too helpful on this topic and I would bet that there is cool info in old issues of Dungeon and Dragon. I will keep my eyes peeled.

From what I can tell, there are at least thirteen Chaos Ships out there:
Name Change: One other thing. Up until 3rd edition, they’re called “ships of chaos.” In 4th and up, they are called “chaos ships.” 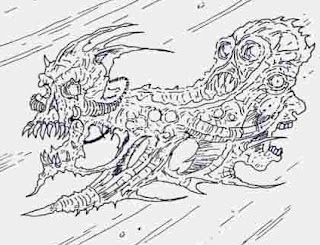 I feel like this Planescape adventure is very overlooked. I know I bought it at the game store and it just sat on my shelf after I flipped through it real quick. I think it has something of a bad reputation, but if you read it, it’s not bad at all! It’s pretty awesome, actually.

General Notes:
Appearance:
Senses:
Weapons and Defenses:
The Entropy Field: The ship ha an aura - an entropy field with a 480-yard radius. It does not affect creatures on the ship. It has different effects on creatures of varied levels/challenge ratings:
Force Projectors: Each head has force projectors that throw cones of force 200 feet long. Effects:
Twelvetrees: This weird plane is where ships of chaos are made. Tortured cries ring out over the plane so loud that you can't hear other people talk.

When you get to this plane, you see huge scaffolds that loom over the land like skeletal giants. Six more ships hover near them. The area is crawling with thousands of demons.

Doomguard Fortress: This is an iron keep 20 feet square and 30 feet high that bears the symbol of a horned skull - the Doomguard. It is a Daern's instant fortress! The doomguard are human/tiefling/dwarf weapon-makers that heroes could hang out with.

Possible Exit: It notes that if you were going to steal a chaos ship, you could leave through the River Styx.

In the Abyss hypes this boxed set up like you’ll learn so much more, but you learn almost nothing new. Ready?
Hellbound 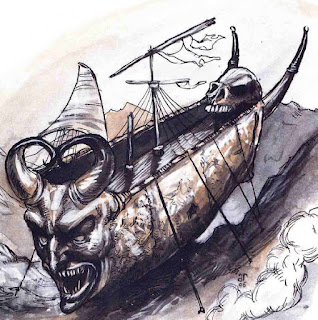 We get a few tidbits:
Dragon Magazine #360

It is mentioned that Graz'zt keeps planar vessels and "multiple chaos ships" in the Bay of Choking Bile. His flagship is known as Waukeen's Tears.

There are a pair of D&D novels that came out in around 2005 that dealt with chaos ships. These stories are set in the Forgotten Realms and involve drow. Here's what we learn:
Extinction: In case you are curious, here's a quick summary of the story (spoilers):
I've never heard of those demons before. Kind of goofy.

Annihilation: Not much more information. The heroes take the chaos ship to the Demonweb Pits and they learn that Lolth has actually moved her realm to its own planar space. The group parks the chaos ship and adventures into Lolth's new domain. Sounds pretty cool.

This book describes them as “titanic vessels” capable of bringing huge numbers of passengers across the planes in an instant. “6 are thought to exist.” Lots of tweaks and details:
The Plane Below

We get stats for 4e chaos ships. A chaos ship functions only in the Abyss and the 'elemental chaos', which is a 4e thing that combines the elemental planes, pandemonium and limbo into one uber-plane.

Be a Passenger: There is a sidebar claiming that this is the most dependable way to travel in the lower planes. Only a few chaos ships exist, but you can book passage on one.

In this ridiculously epic adventure, the group has to steal the chaos ship owned by Orcus! It is called Shevaithan. We learn a ton of stuff and this adventure even comes with a poster map of the chaos ship!

Chaos ships are designed to travel through the Elemental Chaos, no two are exactly the same. All require "bottled chaos" to drive them. Containing the essence of the Elemental Chaos into crystal globes is a monumentally difficult secret task.

Teleportation Circles: There are four magic circles on Shevaithan's deck:
In the adventure, stuff happens:
Anarch Sphere: A ten-foot diameter globe that boils and churns. It contains the essence of the elemental chaos.

Great article on a subject I knew little about! I've been going through the Rogue Mistress from your all-time best list; I'm totally converting the Ö Sidàta in the adventure to a chaos ship and using your info to outline some plot implications! These exhaustive subject studies of yours are golden. Thanks for your efforts.

Jason R: The O Sidata!! Awesome. That would make a fantastic chaos ship. In my campaign, one of Jessie's old characters - Saridrina - has possession of the O Sidata. Maybe I should use the Rogue Mistress as the group's ship in my spelljammer campaign. Thanks!

The adventure also featured a "chaos ship" against the PC's on the water world they ended up plane jumping into. I guess one could convert that one to a D&D chaos ship as well. Having read through the entire adventure now, the highlights you pointed out are indeed its strengths. The overarching plot elements are great. The actual adventures it links together would need a lot of tweaking for my table. With so many great Dungeon adventures or the like out there, I'd probably just swap out the ones in the adventure for something similar. The book did get my creative juices going, however, and my love for Spelljammer just welled up like crazy!

As far as ships go, I've always wanted to let my PC's get their hands on the Sky Ranger from the Sea of Sorrow adventure from Dungeon 36. I thought it was one of the best adventures in Dungeon period. I was so close to running it years ago, but never did!

Your article makes mention of 2 D&D novels, yet they are not cited, shoddy article.